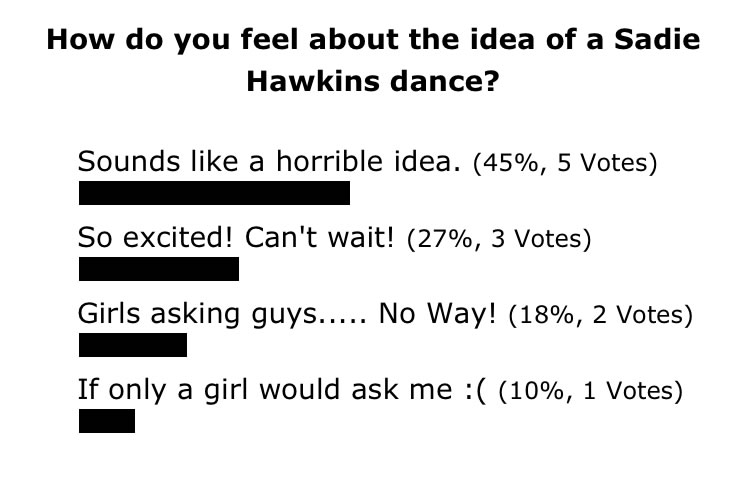 Everyone has something to say about this year's dance

Sadie Hawkins is the newest topic around the halls of Dunbar. Everyone is buzzing about who’s taking who, and how the girls are asking their dates. It’s no shock that girls and guys have extremely differing opinions when it comes to a school dance, so our staff took to the halls to discover the varying ideas about this year’s dance. The event will take place on Nov. 2 in the Dunbar cafeteria.

Girls were asked their opinions of this dance being a “girls ask guys” deal, and the reactions ranged from excited to uninterested. Many girls liked that they had an opportunity to ask a guy to the Sadie Hawkins formal, while others were very opposed.

“I think that it’s a dance just like any other dance,” said sophomore Julia Welsh.

On the other hand, another sophomore, Rachel Wilkinson, thinks that the Sadie Hawkins formal is “a dumb concept.” Wilkinson does not think that girls will ask someone to the dance unless they have a really good guy friend or a boyfriend. The girls participating in true spirit of Sadie Hawkins will not only have to ask a guy, but they will also have to figure out how they will ask their date.

When a girl asks a guy to Sadie Hawkins, she basically has two options: go all out and make something over-the-top or keep it low-key and simple. Surprisingly, many of the girls interviewed preferred to ask in a simple manner. “I think going really extravagant puts a lot of pressure on everybody involved,” said junior Maddie Carter.

Most girls opt to play it safe, but a few are waiting to decide how to ask until they know who they are going to ask. Mandy Dryer, a freshman, explains this when she says “it kind of depends on the person you ask. It depends on if they’re a shy person or outgoing.”

Guys at Dunbar had extremely varying reactions when asked how they felt about a girl asking them to the Sadie Hawkins formal.

“The gender roles have been reversed,” said junior Zach Hall. “It throws you off because guys are so used to being able to take charge.”

Adrian Finley, a senior, saw the role reversal in a different light.

“It’s different,” said Finley. “As a guy, you don’t have feel pressured to ask someone.”

Jimmy Rutherford, a junior, emphatically stated that he would like to be asked in a “big, over-the-top way” to match his so-called “big, 0ver-the-top” personality.

Junior Adam Rogers was brutally honest when asked how he would want to be asked to Sadie’s.

“I’d want them to ask me in a small way because then I’d feel a whole lot less awful after I reject them,” said Rogers. “That way, they’re not left thinking ‘what am I going to do with these Jordans I bought for my Sadie’s-posal.’”

Unlike the girls at Dunbar, guys here are feeling no stress about the Sadie Hawkins dance.