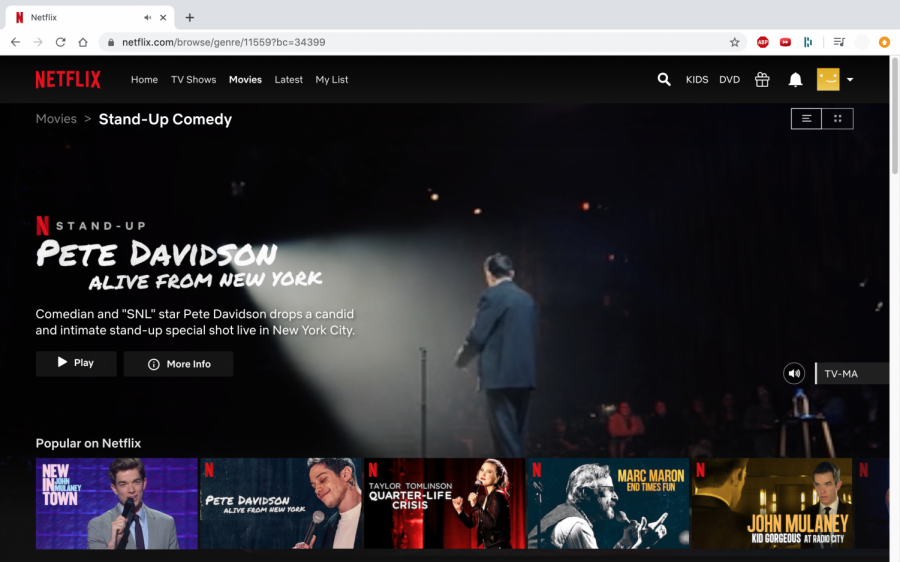 Netflix has countless comedy specials to watch during your time at home.

New and old Netflix standup specials are ideal distractions from the boredom of social distancing.

It’s hard to find the perfect film to get you through the panic and boredom of quarantine season. Typically perennial teen favorites like Clueless or Mean Girls remind me too much of the school I’m missing; serious dramas feel unnecessary when life is already so tense. At times like these, it seems pure comedy is the way to go – no plot to fixate on, no characters to follow, just endless, uncomplicated laughter.

With that in mind, I’ve spent the last week binge-watching the best standup comedy specials Netflix has to offer, and am reviewing them here to make it seem like I’ve been productive. My apologies to any Hulu users out there – if you want to give me your password, I’d be happy to provide my thoughts on their offerings, too.

I was drawn to Maron’s latest standup special after watching him in Season 3 of GLOW, a show I will never stop proselytizing for. Maron’s personality on stage is much like his demeanor on screen. He’s casually snarky, with an alternately bewildered and bemused distaste for the actions of the vast majority of humanity, made all the more convincing by his open admission that he does not exempt himself from that category. Maron is at his best when contemplating the foibles of the human psyche, whether addressing the absurdity of dietary supplements or anti-Semitism. His knowingly deadpan delivery, punctuated with brief moments of hectic, face-grabbing intensity, make for a delightful special that’s more about true wit than physical comedy.

Some of his jokes about the modern world fall flat – I’ve heard one too many comments on this generation’s predisposition towards selfies and hashtags to find his take especially humorous. And towards the end, his extended discussions of misogyny and the Rapture end up veering into the grotesque. But for a special about the end of the world, I spent two hours feeling remarkably unconcerned about the seeming apocalypse going on around us.

Looking back, I cannot describe exactly what I found so funny about John Mulaney’s latest piece. A takeoff on the children’s variety shows of yore (Or maybe an earnest imitation? At times, it’s hard to tell which.), the show highlights a cast of pre-teens alongside celebrities they are likely too young to recognize. As with any series of sketches, some of them fail – I was not overly taken with the sendup of a Sony Animation focus group, nor the animated skit “Sascha’s Dad Does Drag” – but either the show got better or I warmed up to it as it went along. The musical numbers are sweet without being cloying, and are nicely balanced by breaks for pure surrealist nonsense. I especially appreciated the periodic interviews with cast members about their deepest fears – it was nice to remember that you can be scared of something other than COVID-19.

Is this my favorite of John Mulaney’s works? No. But if you’re tired of endlessly rewatching New in Town or Kid Gorgeous, this one’ll certainly do – and it’s worth sticking to the end just for the chance to watch Jake Gyllenhaal as the increasingly despairing Mr. Music.

I know I said comedy specials are the perfect way to turn your brain off and just laugh, free of the troubling emotions circulating out there in the real world. But if you want to watch an evocative special that will make you cry from laughter and then despair, Nanette is the ideal choice. Gadsby doesn’t shy away from societal problems, or from implicating her viewers in their complicity of them. Yet she maintains just enough wit and truly interesting humor – I particularly enjoyed her discussion of Van Gogh and the archetype of the suffering artist – that I ended the film equally fascinated and introspective. Nanette is not a feel-good special by any means, but that makes it all the more worth watching.

As Meyers himself admits, it’s jarring to see him anywhere other than behind the desk of the late-night show he’s hosted for years. But we’re already in a state of confusion, with late-night hosts performing to empty studios, so why not try something new?

For a format so novel to his audience, if not to Meyers himself, he certainly does a good job. Lobby Baby is part of a long line of recent specials where men discuss the #MeToo movement and their newfound attempts towards wokeness, many of which end up seeming more earnestly than jokingly misogynistic. But Meyers is self-aware enough about his lack of self-awareness that the special is both hilarious and endearing. Much like the older The New One by Mike Birbiglia, Lobby Baby presents a fundamentally sweet portrait of fatherhood, even as it pokes fun at the inevitable (or perhaps willful) mistakes these self-deprecating dads make. (For a similarly hilarious take from a mother’s perspective, I heartily recommend Ali Wong’s Baby Cobra.)

The above list is by no means exhaustive. If these four films aren’t enough to get you through April 20, I’d also encourage you to watch Weirdo (Donald Glover – yes, the man has truly endless talents), Homecoming King (Hasan Minhaj), Alive in New York (Pete Davidson), and many more. Who knows? You could even go crazy and watch something with more than one episode – but that’s a subject for another time.