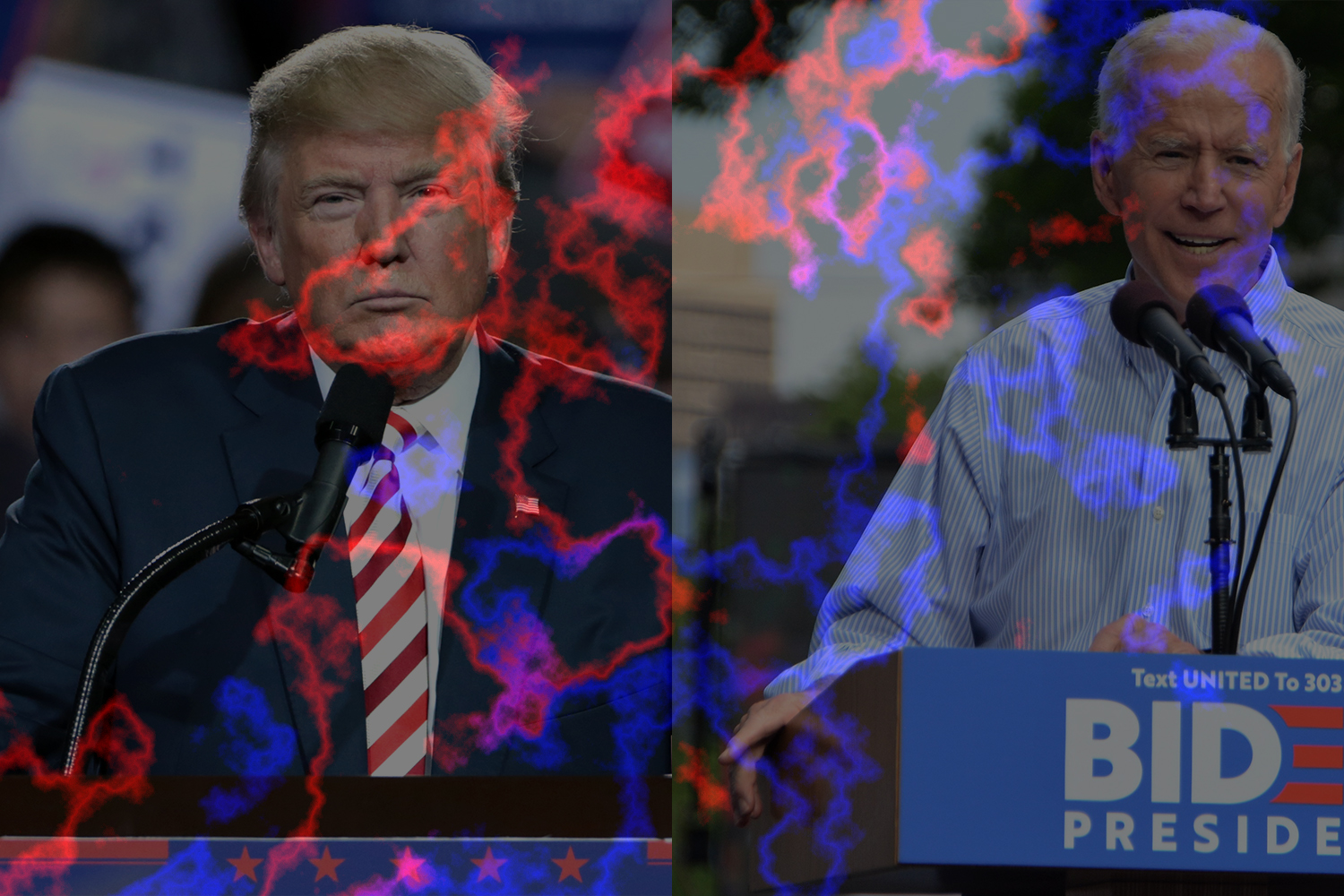 A Teen Perspective on the Candidates

More and more youth are getting involved in the political process. Even those not yet old enough to vote are making up their minds about who to support.

It has been a contentious election year, and no race has received more attention than the presidential one. Students across the political spectrum are passionate about their preferred candidates. From healthcare to the economy, immigration to climate change, there are dozens of issues young people care deeply about. Here, four Lamplighter reporters share the problems that are most important to them and how they think Joe Biden or Donald Trump would best address them.

Since the time of this article’s publication, armed insurrectionists have attacked the United States Capitol. Under the direct incitement of President Donald Trump, these individuals injured dozens of journalists and law enforcement officials.

PLD Lamplighter’s editorial board has chosen not to take down this article; in instances where opinions and viewpoints change after initial publication, it is not our policy to remove those pieces, and as a public forum, we do not make it a practice to censor or remove content. However, we reaffirm that opinion pieces do not necessarily reflect the beliefs of our organization and that the entire PLD Lamplighter staff, the authors of this piece included, condemn these acts of violence and the assault on our democratic institutions.

This year has been the worst rollercoaster ride known to man, and it being an election year has made it even harder. Presidential candidates Donald Trump and Joe Biden have been neck and neck all campaign long. As we approach Nov. 3, it is important that everyone be well informed on who they are voting for. If we were 18, we would be voting for President Donald Trump.

According to the Bureau of Labor Statistics, “Although the decrease in the number of unemployed people was relatively small by historical standards, the jobless rate fell to its lowest level since 1969, when it was 3.4 percent. In 2019, the unemployment rates declined to 3.5 percent for both men and women.”

For example, he signed The First Step Act,  a prison reform that gives inmates the opportunity to make more money, decreases the risk of their committing another offense, creates lower minimum sentences for certain offenses, and reviews the risks and needs assessment for inmates.

He also signed the CARES Act, which provided emergency assistance to individuals, families, and businesses affected by the coronavirus, and the Protecting Animal Cruelty and Torture Act (PACT), which made extreme animal cruelty a felony. And within the first 100 days of being in office, he fought to keep our country safe by protecting our borders from illegal immigration.

A negotiation, orchestrated by Trump, between Israel and several other Middle Eastern countries has shown him to be one of the most peaceful presidents in a long time. Trump is the first president in US history to step foot in North Korea. He also liberated thousands of Middle Eastern people from ISIS’s reign of terror by killing many of their leaders and fighters.

In December of 2019, less than a year ago, President Trump signed a bill creating permanent funding to historically black communities.

According to US News, “President Trump…signed a bipartisan bill that will permanently provide more than $250 million a year to the nation’s historically black universities, along with dozens of other institutions that serve large shares of minority students.”

According to a US national poll from Dec. 2019, “Fifty-seven percent of Americans say they are better off financially since Trump took office.”

A President should be judged for their policies and what they accomplish in office, not what they post on Twitter. Donald Trump was a beloved and admired person by many until he decided to run for President. Then all of a sudden he supposedly became a despicable human being.

All of the great things he has done in his first term as President of the United States indicate otherwise.

Do you usually watch presidential debates?

Four years ago, America elected the most unqualified person to ever run the country: Donald Trump. Now, on Nov. 3, we have a chance to replace him with a man who has spent more than 36 years in the Senate and eight years as a Vice President.

Donald Trump, the incumbent Republican President, inherited an economy that was doing well, and one that had managed to add jobs for 76 months before him coming into office. He took credit for the resulting boom and proceeded to give numerous benefits to the rich in the form of tax cuts while failing to help middle and working-class Americans. When the COVID-19 pandemic hit, his poor planning caused the loss of 14.7% of American jobs in 2 months, and he has denied on numerous occasions that there is a problem. He also claims that he has created thousands of jobs for Americans, when in fact the number of jobs has decreased by about 1.3% and the unemployment rate has gone up 7.9%.

But Joe Biden, the Democratic Presidential nominee, has a plan to fix the economy. He will extend the COVID-19 crisis unemployment insurance for those out of work, give aid to the state, local, and tribal governments so essential workers do not get laid off, and offer a comeback package to Main Street business. This means that under Biden, Main Street businesses, also known as small businesses, would have multiple policies set into place that would help them build back better and stronger through access to capital and targeted resources for woman-, veteran-, and minority-owned businesses.

He will also help to mobilize American manufacturing while protecting our climate.  Biden plans to invest in clean energy so America is carbon-neutral and has a 100% clean energy economy by 2050. He also believes that one of the core purposes of an economic agenda is to end systemic racism in America. He will pursue an agenda that will help to close the racial wealth gap, invest in Latino, Black, and Native American communities, and so much more. Biden will build back a stronger economy and truly help those who need it, instead of only helping billionaires as Trump has.

And it’s not just the economy that’s failing. Trump’s COVID-19 response has been almost nonexistent. He could have been able to control the pandemic like Taiwan, New Zealand, Iceland, and the UAE did if he didn’t get rid of the pandemic playbook that the Obama-Biden administration left him with.

When COVID-19 came to the US, Trump claimed that the virus would go “away in April with the heat – as the heat comes in. Typically, that will go away in April.” That was in February. As the virus progressed and the situation worsened in America, by April we were averaging around 21,000 new COVID-19 cases a day, while Trump continued to claim it was going to go away. He has repeatedly contradicted the public health experts, such as infectious disease expert Dr. Anthony Fauci and his own CDC director, Dr. Robert Redfield. Trump has even gone as far as suggesting that people should inject bleach and disinfectant into their bodies to help combat the virus, which was a ludicrous suggestion that put the lives of many in danger.

Biden and running mate Kamala Harris have a plan to stop the spread of COVID-19. Biden and Harris plan on fixing the problems with Personal Protection Equipment, PPE. This means that he will focus on making sure that the US has enough PPE for our frontline workers and healthcare workers in the future and ensure that we have the manufacturing capability on PPE so we don’t have to depend on other countries during a crisis.

The plan also includes fixing testing and contact tracing problems, having evidence and science-based national guidance, having an equitable distribution of vaccines and treatments, and helping protect the elderly and high-risk citizens.

While Trump tries to get rid of the Affordable Care Act (ACA), which covers over 20 million Americans, and replace it with his nonexistent health care plan, Biden will expand and protect the ACA by adding a new public health care option onto the existing plan, making our healthcare system less complex to navigate, and cutting healthcare costs.

Vincent Hutchings told MarketPlace, that “When it comes to Biden,… his ideas are more far-reaching.” Despite being a moderate Democrat, Biden’s plan goes further than most Democratic nominees on issues such as health care options, education, and housing inequity. While Biden has detailed plans and policies, Trump’s policies are very vague and he seems to be running a very nontraditional re-election campaign since he didn’t draw up any plans before being nominated during the Republican National Convention earlier this year.

Beyond his superior policy agenda, Biden is clearly the more ethical candidate. Trump disrespected our military by calling them “losers” and “suckers” in a private conversation. Take his comments about John McCain: “He’s not a war hero. He was a war hero because he was captured. I like people who weren’t captured.” Insulting the people who gave their lives to serve and protect our country is downright wrong, plain and simple.

Biden understands and respects what an honor it is to serve in the military. He has two sons, Beau (who sadly passed away from a brain tumor in 2015) and Hunter. Both sons served in the Navy, and Beau went to war in Iraq. Biden also has a plan to help military families by paying service members a competitive wage, prioritizing military children, and providing resources to military survivors, caregivers, and spouses.