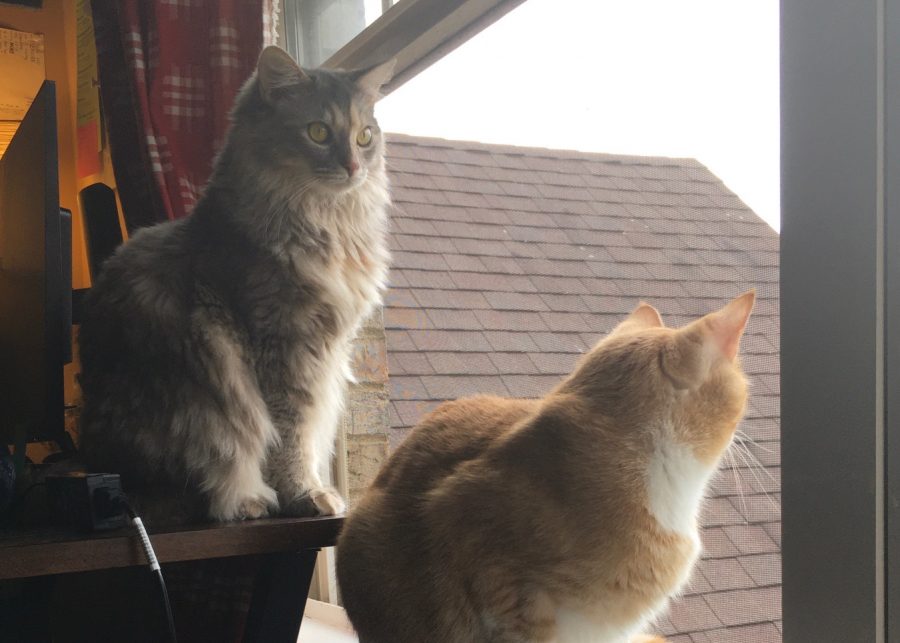 Minnow and Nova stare out the window, stuck inside like the rest of my family.

With More Time on My Hands, I Taught My Cats Some Tricks

It’s common for people to teach their dogs tricks, but did you know it’s possible to teach other animals, too?

Lying in bed has become a frequent pastime for me, with little to do and boredom becoming the new normal.

Luckily, an idea came to me one day when one of my cats hopped onto my pillow, scaring me awake from my midday nap: why don’t I teach my cats some tricks?

Those who know me more than likely also know that I adore cats, hence my obsession with these two little angels: an orange male tabby named Minnow and a gray long-haired female tabby named Nova.

My mom said dogs would be smarter and easier to train than my cats. Spurred on by an excess of free time and a desire to prove my mother wrong, I trained Minnow to shake hands to prove my mom wrong. Nowadays, he stretches out his paw and wiggles it if he sees anyone with food, from canned chicken to table scraps.

Anyone who gets to know Minnow can see that he’s obviously a smart cat. Then there’s Nova, who’s probably the prettier of the two, but a little slow at times.

During Minnow’s training, I had spent an afternoon sitting with him, shaking his paw before giving him a treat. He picked it up very quickly, but the same strategy didn’t work with high-fives. I suspected that this was because raising his paw fully would take more effort than simply lifting it halfway like the shake required.

So instead of trying to teach Nova something Minnow couldn’t even learn, I decided to teach them both an easier trick: to come to me whenever I rang a bell.

To start, I’d shake the box of treats as I always did when I called for them to come downstairs, except this time I added the sound of a bell ringing.

The only issue was that Minnow hated loud noises, including the obnoxious ring of the leftover Christmas jingle bell in my hand. But after a few attempts, Minnow got used to the bell and ate his treats.

For two days, I stood with treats in the kitchen while ringing a bell. They quickly realized that ringing a bell meant food for them, but I wanted the trick to work while in other places, or when another person rang the ball. This problem was solved by moving around with treats and then handing some over to my mom while I walked away and she rang the bell.

Truthfully, it is easy to condition your pets.

A classic strategy is to give them treats when they perform the desired action and a blank stare if they don’t. While dogs are the classic staple for a pet that you can play with, other animals are just as fun to train, like hamsters or birds. If you’re ever bored during quarantine, teaching your pets new tricks may not be such a bad idea.