This scandal came as a shock to the world. Here's how it effected students at Dunbar.

The Corruption of College Admissions

It is no surprise that the admissions process is somewhat biased. However, the corruption of the system has been completely taken advantage of, with people using their money to have power over others.

Colleges like U.C. Berkeley, Yale, Wake Forest, and UCLA, have rigorous requirements to be accepted, making the appeal of these schools even higher. This causes families to go to an extreme to help get their child into the college of their choice.

The bribery scandal that was made public earlier this week, indicted several prominent families that had persuaded various coaches, SAT proctors, and admission officers to get their student admitted.

By means of money in the form of generous donations or direct deposits, these parents made it clear that they would do whatever it takes. Some may call it using a “side door.”

Only a fraction of the population is lucky enough to be offered a spot at one of these schools, and as time has passed it has become more about what you can offer the school financially than your academic excellence or personal character.

At the base of these scandals is a man named William Singer. Wealthy business men, actors, and CEOs have paid him up to 6 million dollars to bribe coaches into making fake athletic accounts to highlight their student.

Singer used a non-profit organization for disabled children as a front to easily access large sums of money from parents without seeming conspicuous. He pleaded guilty and was charged with obstruction of justice, fraud, racketeering, money laundering.

This issue was brought to court to be questioned.

“These parents are a catalog for wealth and privilege,” Attorney Andrew Lelling said.

But in this case their money could not buy them out.

Around 50 people were arrested on Monday, while the universities themselves are not seen to be conspirators. Lelling argues that it is not only a scandal because of the multiple fraud accounts but because for every privileged student admitted, one more worthy of the position was turned away.

Outrage swarmed the public after 50 people were charged and accused of bribery and cheating in a scheme to secure spots for their children at pretentious schools. Their families attempts to cheat their way into the universities caused major backlash from the media and other perspective students. A select number of students apply to these high profile schools each year and even fewer are accepted as a member of the incoming class.

High school students across the country are appalled at how the process has been degraded and become more about money than academic excellence.

Dunbar senior Taylor Colony said, “It’s definitely unsettling, I know there weren’t a ton of people involved in the scandal and there’s a very low chance that I was next on the list, but it is still not fun to think about that being a possibility.” Taylor applied to Wake Forest and Yale University, both schools involved in the misconduct.

“It’s definitely unsettling, I know there weren’t a ton of people involved in the scandal and there’s a very low chance that I was next on the list, but it is still not fun to think about that being a possibility.””

As one of Dunbar’s brightest students, she was extremely thorough going through the application process. “I got a college counselor that was experienced with the process and served on boards at different universities so she knew exactly what they were looking for.” said Taylor. This is not at all an uncommon approach if you have the resources. Her methods were honest and her application was impressive. This is a perfect example of a deserving applicant.

The worst part of the intricate scandal was the students that were deprived of an excellent opportunity because of the superiority money can buy. The people being admitted should be well-rounded students with high academic achievement and good morals. Choosing a student based on what they will bring to the colleges community, rather than the money they can contribute, will deeply shape the character of a campus and ensure that the student body is filled with individuals that are driven and honest members of society. 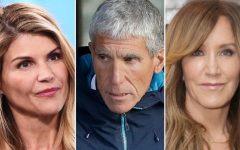 The Corruption of College Admissions