And here we come to the end of season one of Torch. Unfortunately, the problem of reckless driving doesn't have a visible end. Even in 2015, there are hard-to-swallow stories that are reality for Dunbar students. "I peer pressured her to get a Twitter," said Madison Dedman about Woodford senior Maddie Jackson. "But now there are no more posts. No more retweets. no more favorites." But Madison has shown that if we choose to #LiveLikeMaddie, sadness will turn into pride for those lost. This episode features Mrs. Amber Faris and Dunbar alumnae Madison Dedman and Kira Pauley.

The Nissan Altima lies on its roof after Maddie Jackson's wreck on Feb. 9, 2015. All lanes of Versailles Road were closed for several hours after the accident. 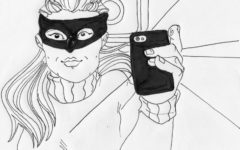