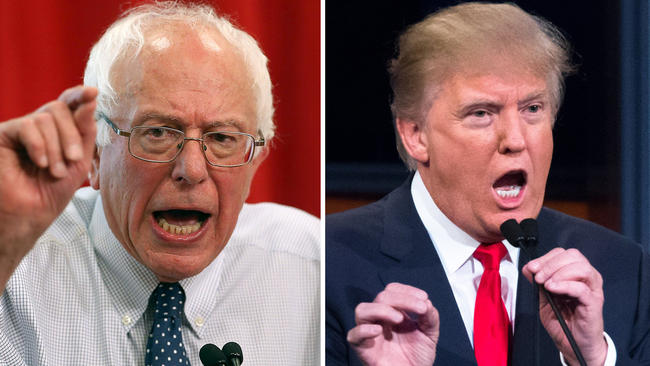 Jack and Keaton teach students how to register to vote.

Earlier this month, staff reporters Jack Stokely, a junior, and Keaton Allen, a senior, showed students how easy it is to register to vote at the County Clerk’s office. Now, they go head-to-head in their political viewpoints on the presidential candidates.

“A Political Revolution is Coming” 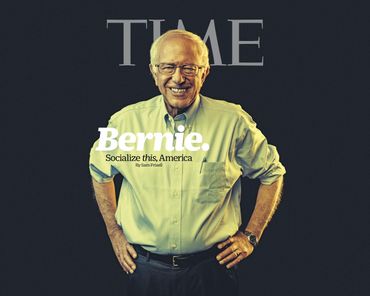 This November, citizens all across the country will come together to elect our nation’s next leader. As a high school senior, I have the opportunity to give my input; As little as my vote may seem, every vote counts. I have never really been actively involved in politics until this past year as I was approaching my 18th birthday. I started watching presidential debates involving both parties so I had a better idea of what my options were.

When I went downtown to register to vote, I chose to be known as a Democrat. The more liberal social views, opinions on immigration, and the way I saw my parents’ reaction to certain issues is what made me lean more towards the Democratic Party. After weighing my choices for Presidential candidate, I have chosen to back Bernie Sanders. His liberal views match seamlessly with mine, and his views on gun policy, immigration and taxes go along with my own.

We’re here to discuss how our country comes together”

His past is really what influenced me, though, along with how he reacts to certain situations that arise during his campaigning process. In Sanders’ past he was a civil rights activist. There are pictures of him chained to African Americans in protest during the 1960s because he believed in an equal country, and he supported desegregation. During one of his speeches in Chicago this past year, two African American girls rushed the stage to speak their minds. Instead of stopping the two girls who interrupted his speech, Sanders sat back and listened to what they had to say. This is in sharp contrast to Donald Trump, whose staff has been documented actually assaulting protesters. Sanders, to me, actually care about what citizens think, and he is civil to them.

Coming from a family who is very open-minded, extremely accepting, and not very religious, it is very important to me that I vote for the candidate who shares my same values. Although I don’t agree with raising the minimum wage, almost all of the issues he addresses I can stand by and support. Sanders believe in helping people. He wants to have free access to college, which I agree with. I feel like if you want to go to college, after years of being forced to go to school, it shouldn’t cost you an arm and a leg to go. If you make the choice to further your education then it should be provided. He also believes strongly in government assistance to those in need. I will admit that some people on assistance do cheat the system, but I’d say 95% of the people actually cannot work, and they do need this help in order to survive.

Something that scares people is that Bernie is known as a Democratic Socialist.

Although I don’t stand with Sanders on every single issue he addresses, I will vote for him this November. ”

He models himself politically after Franklin D. Roosevelt—the president who created social programs like Medicare and Social Security. The U.S. does not have economic equality, and this is shown in his economic proposals. The bottom and middle class have to rise to create a healthy Capitalist system.

If we want things to change in this country, we have to recognize that economic inequality and poverty are the core causes for violence and crime. When a whole segment of the population is disillusioned, when they cannot provide for their families no matter how hard they work, and when they can’t afford to get sick or can’t get an education to improve their situation, what else are they supposed to feel?

The happiest country in the world is Finland. Their government provides free college and health care for all using universal health care. Sanders believe in the idea of universal health care, and he wants people to have the same coverage as people who are out in the work place, also regulating health care companies. This would not only help the American people live happier, healthier and more fulfilling lives, but it would also promote innovation and entrepreneurship in every sector of the economy. People would be able to start new businesses, stay home with their children, or leave jobs they don’t like knowing that they would still have health care coverage for themselves and their families.

I also back Sanders because he is the exact opposite of Donald Trump who is a prime example of ignorant, foul mouthed, spoiled, inconsiderate, and racist people who sadly still exist in 2016. The fact he is trying to build a wall and kick out the people that helped build this country is outstandingly ignorant and racist; I don’t understand how someone could vote for such a man. Bernie Sanders specifically states, “We’re here to discuss how our country comes together to, among other things, make sure that 11 million undocumented people in our country no longer have to live in the shadows, no longer have to live in fear, but can live in security and dignity.” He understands the Mexican government is flawed, and it’s hard to get legal status in America as it takes years to become a citizen. He knows the Hispanic race works very hard for barely any money, yet still don’t complain. Ask yourself if you can honestly vote for a man like Trump who wants to label all Muslims to have IDs like the yellow stars Jews had during WWII. Ask yourself if you can vote for a man, when brought to his attention about his followers’ violent acts on a homeless man, responds “My followers are just passionate.”

Although I don’t stand with Sanders on every single issue he addresses, I will vote for him this November. He shows hard work, acceptance and understanding; He shows that he cares about America as a whole, not just a certain race. If you turn 18 before April and haven’t registered yet, please register for the party of your choice, and do the research to pick the right candidate for you. You may not think you matter much but every vote counts. Even yours. 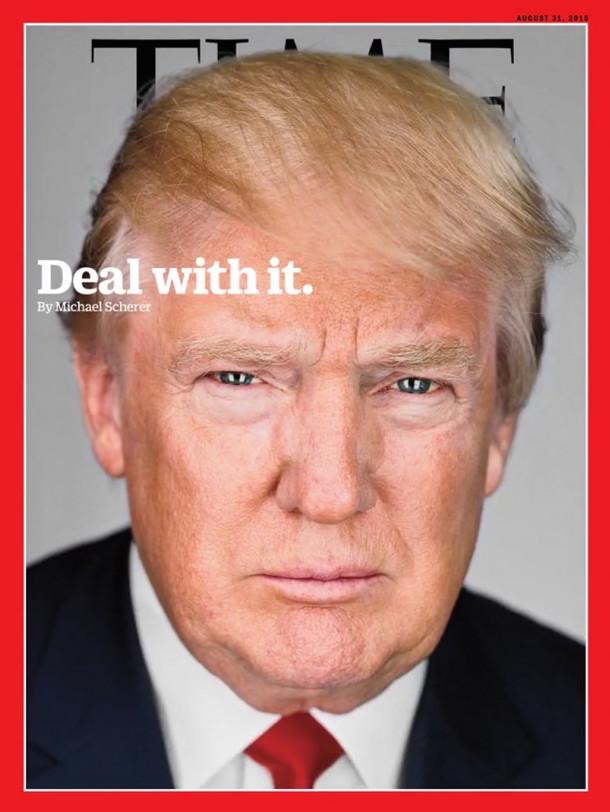 In the coming November, Americans all across the country will come together to elect our next president. As a high school student it may not seem as important but the cold hard truth is that every vote counts. As a student in the modern generation many of my political views are based on what I see in my day to day life usually via social media. Most of the views on social media are just extreme opinions on why the other opponent is wrong for the job. So knowing I will be voting in the upcoming election I know that it is important to find the facts on all candidates so I can pick the best fit for my wants and needs in a good leader.

When I registered to vote I chose the Republican Party. Because of my strong work ethic, devotion to family, and conservative social values, I decided to register under the GOP. When the election rolls around, there is only one man I want in office and that man is no other than business guru Donald J. Trump. This loud, aggressive, back talking man is exactly what this country needs after the terrible eight years of the Obama Administration. His ideas as a business man are exactly what this country is begging for.

With government assistance at an all-time high, we need to get the American people off the couch and back into the work place. According to the last two censuses the percentage of households receiving government aid has gone up from twenty five percent to forty five percent. Trump’s strong feelings on immigration laws could not more perfectly match my own. The number of illegal “citizens” who have come into the country has increased massively since the Bush Admin. From 2008 the number of illegal immigrants has reached an all-time high of 11.8 million people, for a total of 41 million immigrants, according to the Migration Policy Institute. And only continues to climb.

His ideas as a business man are exactly what this country is begging for.”

Now, I am a firm believer that the United States is a place of opportunity and somewhere people can make a life for themselves, but I also believe you must do it the right way. Not only are these illegal families stealing our jobs they are also reaping the benefits that only tax payers should receive. According to The Migration Policy Institute, American tax payers spend over eighty four billion dollars annually to subsidize illegal immigration. If you’re wondering why this makes me so mad, let me tell you that those 84 billion dollars are unnecessary expenses that could be spent on more important things such as our veterans. All I have to say is, build that wall!

Coming from a family that runs a small business, it is extremely important to me that the government lowers taxes on business owners. My family has had nothing handed to us, and we are nowhere near well off; for whatever the reason may be, Bernie Sanders thinks it’s okay to tax the middle and upper-class more and give that money to citizens who live off the government. Obama has set up a world where it is easier to just not go to college, get a minimum wage job, and simply receive government assistance instead of working hard and getting a degree and a job. These are not the values in which America was built, and it cannot continue for another term.

Sanders’ ideas for free college or higher minimum wage may sound like the perfect thing for the lower class, but it will be the pitfall for the rest of the working class. Increasing minimum wage will only cause inflation and will force business leaders to lay off millions and send jobs overseas due to lower production rates.

After finding the facts and comparing my options, I think he will make a great leader.”

Trump’s immigration ideas are not the only thing we see eye to eye on, as a businessman Trump’s plan to bring jobs back to the US is also high on my priority list. While Democrats are busy begging for fifteen dollars an hour to flip burgers, kids in china are making our clothes for sixty cents a day. With these numbers, it is no wonder why all the jobs are overseas. With the 2016 election looking more like a boxing match than a political race, it is important to have a leader who stands his ground and is not afraid to say what he’s thinking.

In order for the Republicans to take back the White House, we need a nominee who is more than capable of taking down Hillary Clinton. If I’m going to be honest, if you were to tell me I’d be voting for Donald Trump to be the most powerful man in the world, I’d initially call you crazy. However, after finding the facts and comparing my options, I think he will make a great leader. Make America Great Again.

*This story was corrected on April 6.