This movie is about four women who try to prove that ghosts are real. When strange things appear in Manhattan, these women try to help the city.

In the end, the women find out that a man is putting transporters to summon ghosts in order to help him take over the world. But the women stop him and become heroes.

I chose this because of the way the script is written to be scary and funny at the same time, is truly marvelous, and the storyline goods together.

Meet the Parents is a movie about a couple who goes to meet the girlfriend’s parents. The father is a man who had worked for the CIA and is very strict about the boyfriend, Greg Focker.

When Greg tries to impress the father, everything goes wrong. He breaks his mother’s urn, loses the cat, and destroys his girlfriend’s’ sister’s wedding. There are also two sequels.

I chose this because there are so many things that go wrong and that makes is so funny. The cast worked well together, and the script was phenomenal.

Happy Gilmore is about a terrible hockey player who tries playing golf to buy his grandma’s house back. Since his slap shot was so good and can hit the golf ball over 400 yards in just one hit.

Gilmore is played by Adam Sandler, one of my favorite actors. Sandler portrays him as a man in his 30’s who acts like a little boy.

Happy doesn’t even want to play golf and when he does, he acts terribly. There are so many battles that he has to face allowing viewers to see him grow during the movie. 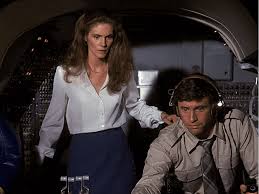 This movie is about an ex-pilot, Ted Striker, who gets on a plane because his ex-girlfriend is the stewardess. In parts of the movie it flashbacks to when they first met, when they broke up, etc. When some people on the plane ordered fish for dinner, they got food poisoning. So Striker had to land the plane so it wouldn’t crash.

My Best Friend’s Wedding is a romantic comedy about childhood friends, Julianne Potter, and Michael O’Neil. They made a deal that if they weren’t married when they were both 28, they will marry each other. Michael tells Julianne that he is getting married to a 20-year-old and Julianne freaks out. At the end of the movie Julianne tries to win Michael back because she loves him, but it doesn’t work.

The Break-Up is a movie about a boyfriend, Gary, and a girlfriend, Brooke, who lived together when they were dating. But then they broke up and started fighting for the condo. They tried to make each other jealous and make the other one want to get back together, but it didn’t work.