Bulldogs struggle in Season Opener with Loss to Woodford County on Nov. 26 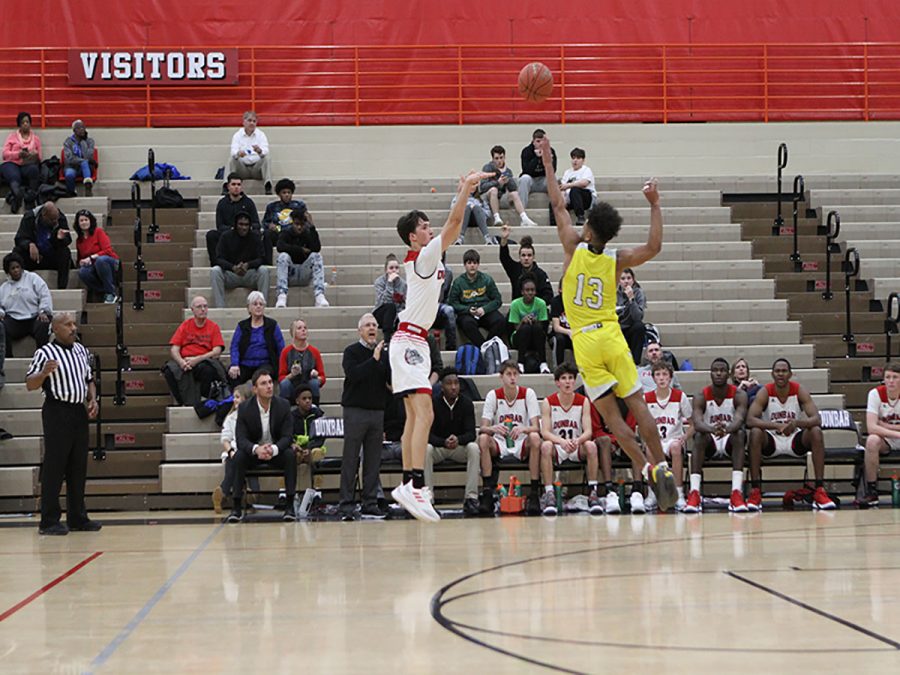 #0 Grayson Shively releases the ball outside the three point circle.

Dunbar’s boys’ basketball team lost their first game of the season to the Woodford County Yellow Jackets with a final score of 52-44.

The Bulldogs were off to a promising start when they won the tip-off. Due to a turnover by Woodford, however, the first score was to the Yellowjackets.

Throughout the game, the audience was on the edge of their seats as the teams battled it out.
The first Bulldog score was by #32, Trevor Rogers. After a foul by Woodford, Dunbar’s #25 Rabbi Kamona got two more points by making both free throws. After the first quarter, the Bulldogs looked hopeful as they were up by one.

Unfortunately, the Yellowjackets took it back in the second quarter leaving the half with a score of 19-15.

Dunbar kept fighting through the second half, and at the bottom of the third #0, Grayson Shively scored a 3, and then soon after scored on a pull-up jump shot, but still trailed behind Woodford 27-30 by the end of the third.

The Bulldogs started the fourth with possession, but the ball was stolen by Woodford for another score. Shively scored two free throws. After a timeout by Woodford, the Bulldogs fought aggressively to come out on top of the Yellowjackets with a 3 pointer by #23, Tim Hall, then one by #31, Max VanDyke. With 1:30 left, Shively scored a 3, leaving fans convinced that the Bulldogs would take the game back. With 21.2 left, a score of 43-48, and a foul by Woodford #12, Jared Gadd, missed the first free throw but made the second. Soon after, a foul was called on Dunbar, and Woodford made both free throws. Those free throws clinched the game and put a Bulldog victory out of reach.

The Bulldogs gave it their all, but after two more free throws by Woodford, the Yellowjackets came out on top.