Sports-related injuries are a major problem in high school athletics 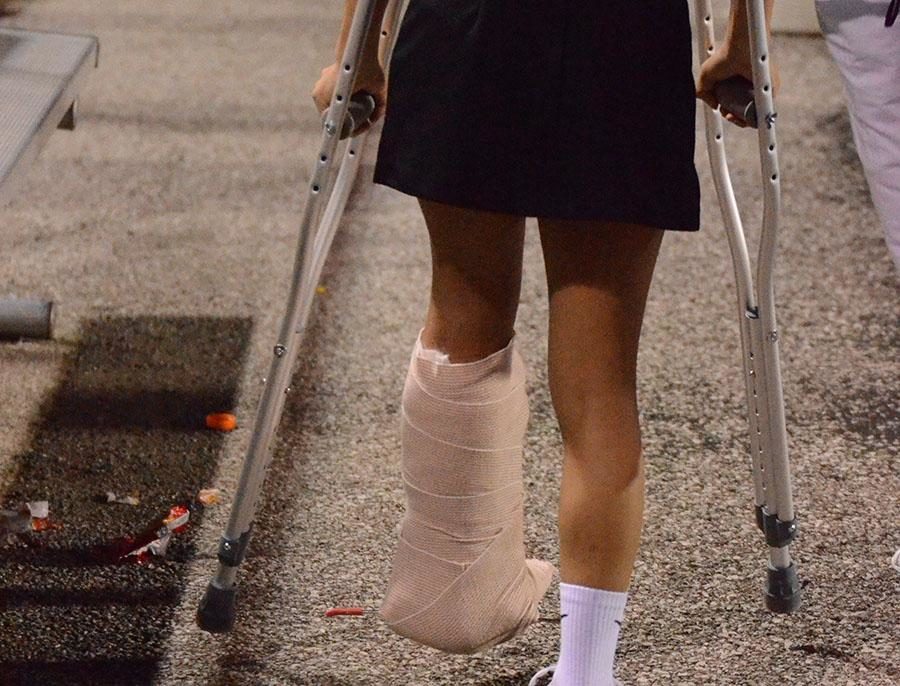 Junior Kimberly Espinoza using her crutches after suffering an injury

Many high school students participate in athletic teams and clubs at their school. Dunbar has 19 different sports teams with practices or games almost every day.

However, injuries frequently stand in the way. High school sports have been made as safe as possible for students, but injuries are unavoidable.

According to Safe Kids Worldwide, over 1.35 million kids were assisted in the emergency room in one year due to sports related injuries.

Sports injuries happen in many different ways. Some injuries are short term like a small sprain but many injuries can leave athletes out for the entire season. Senior football player Dontell Brown tore his ACL during a game this season after contact from an opponent. Brown has received five Division 1 football offers, but due to his injury, he may not receive any more.

Injuries can limit athletes from what they are able to do. Injured athletes are usually held out of practices and games which is devastating to both them and their team. Teams are vastly affected by injuries because they would be missing a key part of the team which could lead to a lack of hope and motivation for the rest of the season.

Concussions are big topics when it comes to sports related injuries because they are one of the most common and damaging injuries in high school sports. A concussion is a traumatic brain injury that is caused by contact to the head and it results in long-term neurological damage. Research has suggested that if an athlete has already received a concussion then they are 1-2 times more likely to receive another one. Senior soccer player Jack Sheroan received two different direct contact concussions from playing soccer, both of which he didn’t remember much from.

Sports injuries are drastic to the health of growing high school students, but the real pain comes from not being able to be a part of the team.

“It feels like I should be out there. I want to help more and it’s kind of sad that I have to stand on the sideline and I’m limited to certain things,” said junior football player Cole Haney.

Injured players can only encourage their team to do better, but they can’t be out there with them making an impact in the game. For many athletes, sports are what keeps them going in life. Athletes have dreams of playing the sport they love in the future but many times injuries have cut careers short.  For many high school athletes, this is the last time they will get to play the sports they love and when their careers are taken away by injury, it can provoke emotional pain and instability.

Nothing will be able to completely stop injuries from happening. Athletes will be able to heal physically from their injuries most of the time, but the injury will always leave behind an emotional mark.