Concussions are becoming more and more relevant in sports, especially in football. 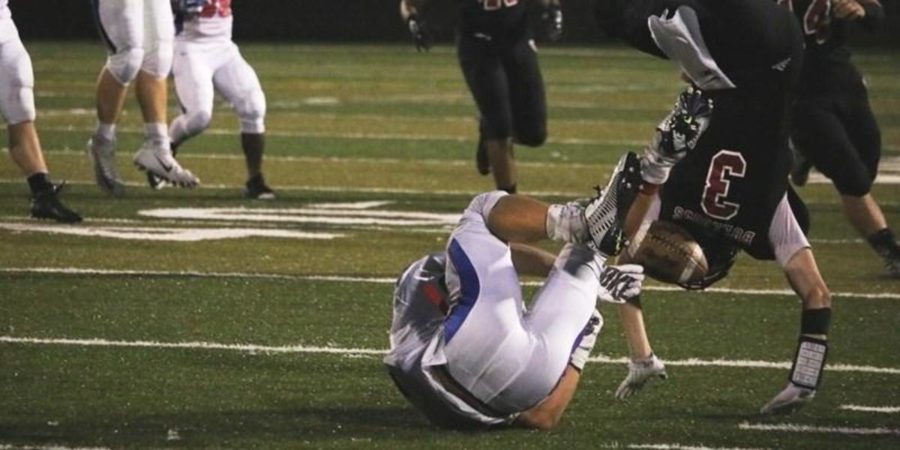 The sound of two helmets crashing together creates one of the most distinct sounds during a football game.  Whether or not you’re in the play, on the sideline, or in the bleachers, hearing that sound gives you chills.  Best case scenario, it is just a slight shake up. But more often than not, it is a looming concussion.

Concussions have become very common among sports injures over the past years.  Football, especially, seems to be a head injury waiting to happen, as players smash and bump into each other.  According to a study done by University Interscholastic, over 236 schools reported football related concussions from the 295 schools that were sampled. This number is extremely high and is rapidly growing all over the United States.

The concussion rate is an outlier in comparison to other injuries in the world of football, and it seems it can’t be halted. Senior defensive back DeRante Sanders believes that there is a possibility of more head related injuries in high school football due to the poor fundamentals of tackling, especially in helmet-to-helmet collisions. The majority of the time, a head-on collision results in a chilling shake up.

Unfortunately, although concussions are very prevalent in college football, they are even more so in the professional league. There have been retired NFL players suing the NFL of not warning players and hiding the damages of brain injury.  The players came together and filed a lawsuit statement regarding this concern.  In turn, the NFL reached a tentative $765 million settlement over concussion-related brain injuries among its 18,000 retired players, agreeing to compensate victims, pay for medical exams and underwrite research.

As mentioned earlier, the NFL basically ended its extensive legal battle over concussions.  As a result, the nation’s largest brain bank conducted a study that focused primarily on brain trauma in NFL players.  Through extensive research, the study concluded astounding results. It found that 96% of the deceased NFL players it examined had clear evidence of a degenerative brain disease known as Chronic Traumatic Encephalopathy. This condition is a form of encephalopathy that is a progressive degenerative disease well known to the football community.

Concussions do not pertain solely to football.  Although many of these injuries can be directly linked to this sport, it is important to note that a study in North Texas recorded more than 2,500 concussions in all sports in the middle and high schools in the district.

For Dunbar’s junior soccer player Jack Sheroan, getting a concussion during the pre-season came as no surprise. He experienced his first head related injury in the 7th grade when he was kneed in the side of the head. “When you get them you can’t really remember what happened, and you have a constant headache. You become really moody,” said Sheroan.

Sheroan had a headache for about eight weeks, and he struggled to read or watch television.  After the blow, he purchased head gear to help prevent this injury in the future. Nevertheless, it can only do so much, as he was still elbowed in the back of the head during a pre-season game this year. This time, he was only held out for two weeks, but similar symptoms occurred. He says concussions are scary, and he hopes it will be his last.

At the end of the day, you can tackle more precisely.  You can purchase higher quality helmets.  You can buy head gear for better protection. But what you can’t do is control what happens out there on the field. Injuries are inevitable.  We, as players, just have to be cognizant and follow the correct procedures if a head injury is diagnosed.

Back to top of page