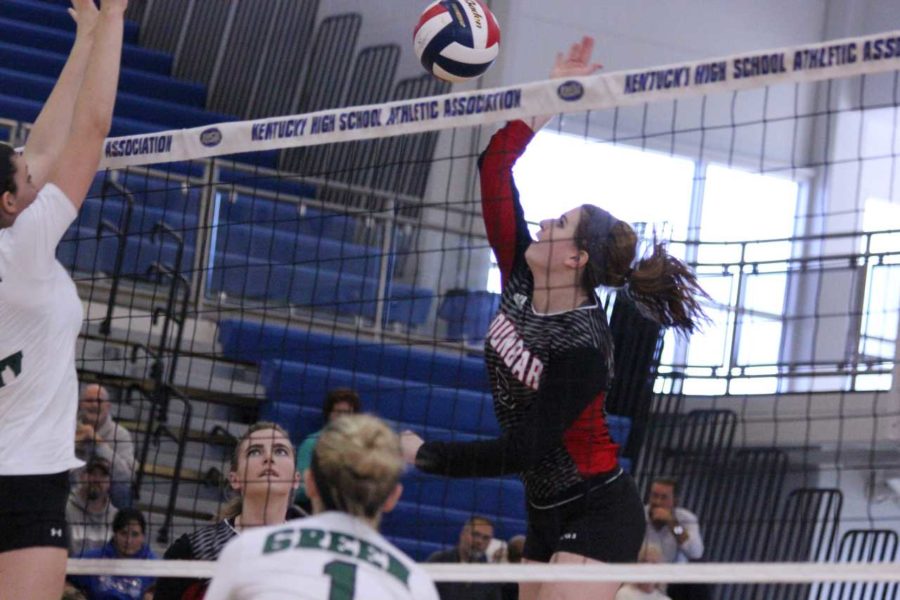 The volleyball team this season achieved all of their goals and exceeded expectations. The girls ended the season 28-11, which made them finish with the third best record in the region. This season, the Bulldogs had an enthusiastic student section that supported them all the way to the final four game in Louisville.

The student section had a number of props including flags, posters, signs depicting the players’ faces and a broom to “sweep the competition away.” It’s safe to say that the student section had an impact on how the volleyball team played . On Friday Nov. 7, the Dunbar volleyball team played in the first game of the state tournament-the sweet 16-and students could pay $25 to ride a spirit bus to Valley High School in Louisville, Kentucky, get an excused absence from school, and get a t-shirt that says “PLD volleyball Dog Pound. Road to State.”

They sold out, and some students even drove up to the game on their own. On Saturday, students carpooled and drove up there on their own time to support the team in their elite eight and semifinal games. There are a lot of talented players on the team, many of whom are seniors. Olivia Canales, outside hitter, Mary Martin, setter and junior, Leah Edmond, outside hitter, are a few. Edmond is already committed to UK as a junior, and Canales is committed to Texas Christian University. There is also a lot of talent with the underclassmen on the team. Sophomore Francesca Macchiavello plays libero and 8th grader, Alexa Hendricks have also stepped up. After a tough loss against Notre Dame on Nov. 8, the team still celebrates all of the challenges they overcame this season, and they congratulate one another on how far they have come.

The Bulldogs had a great season; they started out by winning the Bluegrass State Games and ended with playing in the state tournament semifinals. Everyone in the student section agrees that they have a lot to be proud of, and that they have accomplished so much this season.