Dunbar falls to Henry Clay in the 11th Region Championships

Henry Clay walked away Region Champions after a 3-1 victory over the Bulldogs. 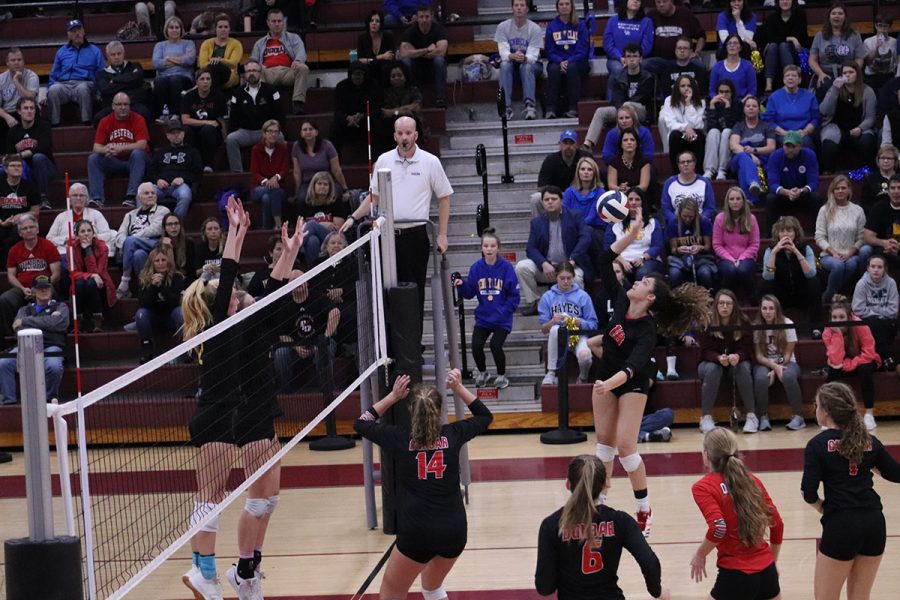 On Oct. 30, both Henry Clay’s and Dunbar’s volleyball teams came to fight. Both teams had had good seasons coming into the matchup, Dunbar ranked 6th in the state and Henry clay ranked 9th. Henry Clay started the game strong, earning the first point in the first set off of a serve. The Bulldogs responded with strong blocks from seniors #13, Peyton Gash, and #14, Eleanor Davis. Henry Clay continued to stay strong, while Dunbar struggled due to communication issues.

At the first time out, the Blue Devils were ahead 18-13, and soon after were the first team to reach 20 points.

Dunbar’s communication issues continued throughout the first set and allowed Henry Clay’s #1 to score the winning point, handing them set one in a 25-18 victory.

In set two, the Bulldogs came out stronger and gained the first point from a ball served by Henry Clay going out of bounds. Dunbar continued to score off of successful plays of their own for a short time, and then the Blue Devils got their heads back in the game and began a strong comeback, the score being 12-9.

As the Bulldogs’ confidence began to fade, #13 Peyton “The Hammer” Gash made a hit that started to change the tide for Dunbar.

After a tough fight from both teams, Dunbar player #14, Eleanor Davis, pulled the rug out from the Blue Devils, and scored the 25th point, winning the second set 25-22.

The Bulldogs started off very strong in the third set, The Hammer bringing the heat early in the match to give Dunbar a quick 10-6 lead. The unorganized Blue Devils soon after began to reassemble themselves and tied the game 13-13.

The lead went back to the Bulldogs after a successful serve by #3, Dunbar libero Caroline Cole, and it was a constant battle from then on. Both teams fighting every second, the game was again tied up at 16s, 19s, 21s, and 23s.

A bad hit from Dunbar resulted in a ball going out of bounds, giving Henry Clay their 24th point, which was soon turned into 25 after a successful serve from Blue Devil #6. The third set ended with Henry Clay in the lead, 25-23.

Henry Clay was the first team on the scoreboard, starting out the fourth set. Dunbar’s Bulldogs continued to fight hard, despite being down 2-1 in sets and had point-scoring blocks by #18, Nyla Gains, hits by #9, Ava Jackson, and digs by #6, Kaetlin Ethington. The Blue Devils then started to communicate better and took the lead again 16-12.

Just after that, a questionable call was made by the official, resulting in an uproar from Dunbar players, parents, and fans. The Bulldog bench received a yellow card for yelling about the call, and in the next play Bulldog #3, Caroline Cole was pulled aside by the official and had a heated discussion with him.

With the score being 19-14 at the time of the issue, Henry Clay soon widened their lead with hits by #2 and blocks by #1. The Blue Devils were the first team to break 20 points and after a few rallies, Henry Clay walked away victorious winning in the fourth set 25-20.

While Dunbar’s season is over, Henry Clay will continue on to the first session of the state championship tournament, playing the Region 12 champions on Friday, November 8th at 6:30 p.m. at Valley High School in Louisville.