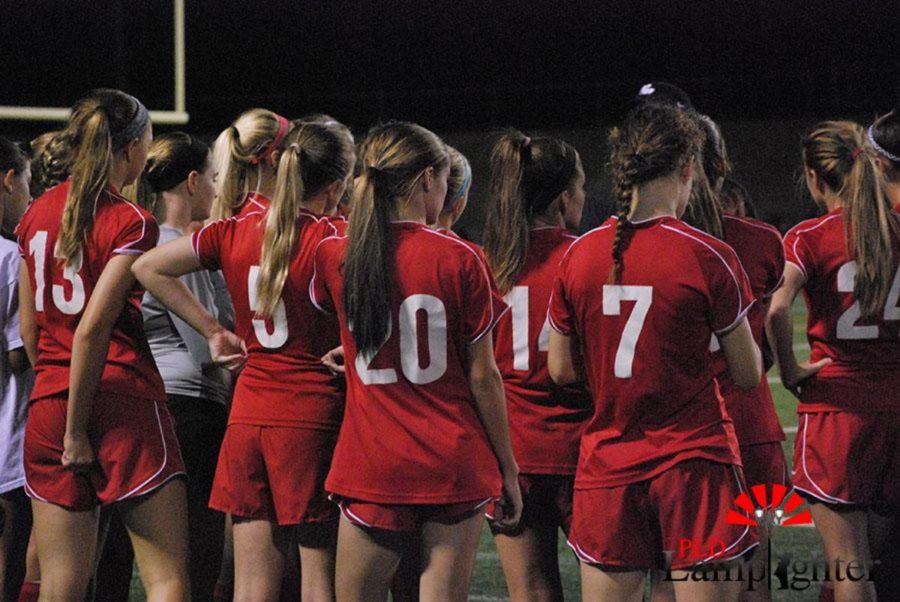 Dunbar Soccer girls have a group meeting after the first half.

Dunbar Girls’ Soccer and Lexington Catholic Girls’ soccer went head-to-head in the first round of districts Tuesday with both their seasons on the line.

The game started off with a shot taken by #43 Bethel Green, the shot went high. A foul on Lexington Catholic earned Dunbar a free kick taken by #19 Olivia Bretz.

At the 7 minute mark, Dunbar fouled giving a free-kick opportunity to Catholic, but the shot was high. The ball was kicked out of bounds by Dunbar, and Catholic earned themselves a corner shot. This led to a play that set up their first goal of the game at the 9-minute mark, making the score 1-0, Lexington Catholic.

Catholic gained back the possession of the ball and took another wide shot on goal. Both teams took and missed a free kick in the 12th minute. Then Dunbar subbed Senior #3 Allison O’ Hara into the game.

At the 20-minute mark, #12 Carmen Combs took a corner kick for Dunbar which was followed by a foul on Lexington Catholic, earning Dunbar a free kick taken by #19 Olivia Bretz that went wide.

A minute later, a shot by #12 Carmen Combs was saved by Catholic’s goalie.

Just before the end of the 1st half, Catholic earned a free-kick saved by our goalie, #00 Caitlin Loope.

The teams went into the half with score 1-0, Catholic on top.

The ball went out on Catholic which led to a corner kick taken by #12 Carmen Combs. Dunbar got a shot on goal, taken by #15 Isabella White, but it was saved by Catholic’s goalie.

Catholic ran the ball all the way up the field and was able to take a shot on goal, but it was saved by Dunbar’s Goalie #00 Loope.

At the 10-minute mark, Dunbar substituted in #17 Mary Elizabeth Bretz.

At the 12-minute mark, there was a shot on goal by #12 Carmen Combs, saved by Lexington Catholic’s goalie.

The ball went out on Dunbar giving Catholic opportunity for a Corner kick.

A foul on #12 Carmen Combs gave her a yellow card within the 17th minute.

Just after the 30-minute mark, a shot was made on Dunbar’s goal making the score 2-0.

Just 7 minutes later another shot on Dunbar was made making the score 3-0 with just a few minutes left to play in the second half.

3-0 was the final score, sending the Lady Bulldogs home for the season.