On Oct. 3 the Bulldogs beat the Thoroughbreds 3-2. 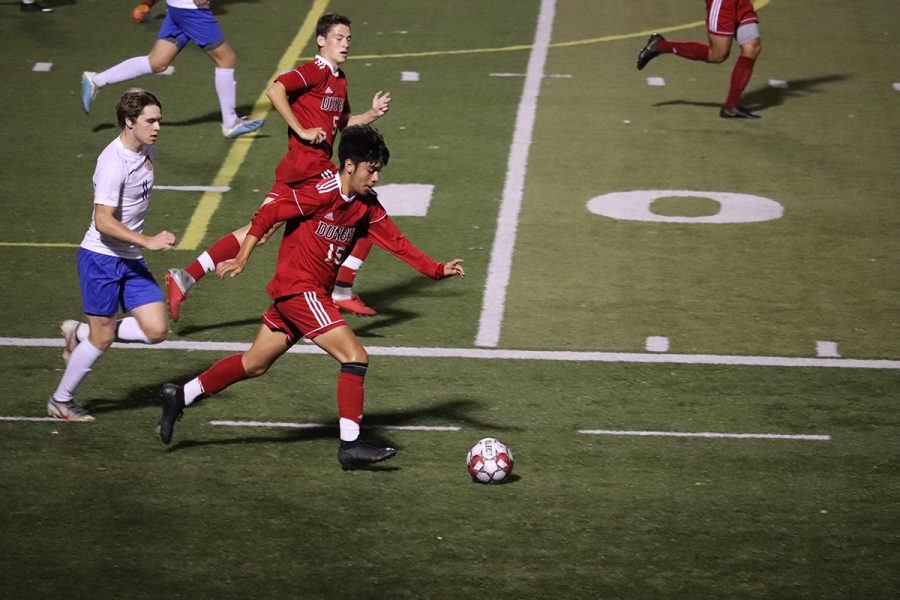 The game began rather slowly with the ball being passed between the Bulldogs and the Thoroughbreds with neither side able to make it to the goal. The Bulldogs tripped up a few Thoroughbreds, but nothing of note occurred until #10 Edward Navarro was able to get a shot in. Unfortunately, it ended up going too high and went through the field goal instead of the soccer goal.

Newport decided to play much more offensively and put a lot of pressure on Dunbar forcing the Bulldogs to defend heavily. One of the Thoroughbreds almost got a goal but missed. Dunbar’s goalkeeper, #0 Arturo Alonso, was able to kick the ball back out to the center of the field, which allowed the Bulldogs to catch up. #14 Drew Doza almost scored but was fouled offside before being able to shoot.

The ball was passed high and far, while the Thoroughbreds and Bulldogs got stuck in a cycle of almost scoring but not quite making it. Multiple out-of-bounds slowed down the game’s pace, but eventually, the Bulldogs almost broke that spell but were fouled while the ball was in mid-air. The clash continued until Newport was able to crack through Dunbar’s defense and score the first goal of the game making the score 1-0.

Not long after, #14 Doza almost made a goal but was fouled again. Multiple other attempts on Newport’s goal were warded off by their goalkeeper. #11 Crescenio Torres was cornered by two Thoroughbreds and made a last stand before knocking one of them down and causing a call for a corner kick. Another clash ensued with #10 Edward Navarro attempting a shot but missing. Luckily, one of his teammates was able to swoop up the ball and make the first Dunbar goal of the game evening out the score at 1-1.

#14 Doza almost scored again but was fouled this time before even being able to kick. #3, Jason O’Hara, almost got a goal from a corner kick, but the goalkeeper kept him out. #13 Kobe Valdiva ran the ball all the way to the Thoroughbred’s net, and almost bumped the score up a notch, but was intercepted when he tried to make a pass.

After lots of nothing, the first half ended with the goals balanced at 1-1. 10 minutes went by and half-time was over, with both sides coming back out reinvigorated.

Five minutes of contesting happen, but then #3 O’Hara managed to get to the goal and kicked it cleanly through the goalkeeper’s blocking area making the score 2-1. It was a very hard contest near Dunbar’s goal and the goalkeeper nearly blocked an opponent’s goal.

After a few more minutes, Dunbar gradually worked their way towards the Thoroughbreds’ goal and attempted to score, but their goalkeeper took a hard hit to the chest to blocks it. One of the Thoroughbreds almost made it to the goal but missed. His shot was swooped up by #14  Doza, who scored after a run to the goal making the score 3-1.

#14 Doza almost scored again but got fouled for offside for the 3rd time. Then #16 Dylan Li managed to get in close and made a kick just inches away from the goalkeeper resulting in both the Goalkeeper and a nearby Thoroughbred getting knocked down. After more clashing, one of the Thoroughbreds managed to bounce a shot off his head and straight into the goal, making the score 3-2.

As the final quarter begins, there were lots of contests with lots of high shots. About 30 minutes in, #15 Johnny Vazquez lead an initiative to almost score on the Thoroughbreds’ goal but sadly made a kick too high which went out of bounds. The game sort of plateaus out from there and the game ends in a Dunbar victory.