Bulldogs Pull Out Win Over Colts 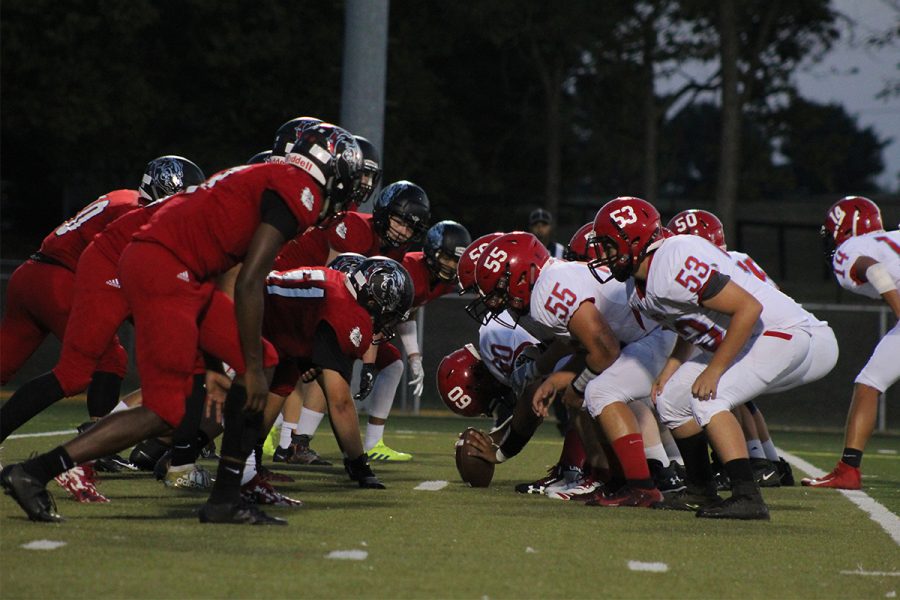 The Dunbar Bulldogs and the West Jessamine Colts faced off for the first down.

It looked to be a tough match-up for both teams. The Dog Pound was vacant at kick-off, the fans were quiet, and the team seemed unenergized even though the weather conditions were perfect for the game.

The Bulldogs started off with the ball, and on the kick, they brought it out to their own 35-yard line. The O-line was not off to a good start as the Colts got a lot of pressure on the running and passing game alike. The Dunbar backs did their best to make something out of nothing, however, and they marched the ball downfield and scored off a 15-yard run from #6 Jacob Green.

With the PAT sailing through the uprights the score was 7-0 with the Bulldogs on top.

The Colts were unable to do anything on their next drive, thanks to a big stand made by the Bulldogs’ defense, and they went 3 and out. But the Colts put points on the board shortly after punting the ball away.

#18 Jake Smith went to throw the ball and was picked off by #9 Jackson Green who took the ball to the house for a pick-six. The Bulldogs were able to block the PAT, making the score 7-6 Bulldogs.

They took over on offense at their own 35-yard line. The pick didn’t seem to rattle #18 Smith’s confidence. Early in the drive, he hit a big 59-yard pass to #2 Mitchel Joseph which took the ball to the 1-yard line. #6 Green ran the ball in shortly after for the touchdown. After the PAT went good the score, was 14-6 with the Bulldogs on top.

The Colts offense was moving the ball much better than they were on their first drive, getting the ball to the Bulldog 35-yard line. #4 Kane Lathery took a pitch and ran at the line, but then pulled back and fired a shot downfield to #9 Green for a 35-yard touchdown. The Colts lined up to go for 2 and were able to get it with a pass from #12 Noah Reliford to #9 Green tying at 14.

The Bulldogs pushed the ball to the Colts’ 18-yard line which is where they were when the clock expired on the 1st quarter, the score tied at 14.

The Bulldogs turned the ball over on downs at the start of the 2nd quarter but got the ball back shortly after. #12 Reliford threw an interception to #9 Tyler Johnson, which gave the Bulldogs great field position.

The Bulldogs capitalized off of this quickly, with #18 Smith getting a 38-yard touchdown throw to #8 Frank Illunga. With the PAT, the bulldogs went up 21-14.

But the Colts weren’t finished yet.

#12 Reliford moved the ball well for his team throwing multiple good passes and shredding the secondary. They capped off their drive with a 36-yard touchdown pass from #12 Reliford to #4 Lathery. The Colts went for 2 and got it off of a run, making the score 22-21 Colts.

Neither team had much luck for the remainder of the half and the score remained 22-21.

The Colts got the ball to start the 3rd quarter and started marching the field, however, the Bulldogs defense started showing up in the RedZone. They forced a fumble at the goal line and were able to recover the ball.

#2 Joseph ran for 14-yards to set the Bulldogs up at the Colts 39-yard line early in the drive. They capped the drive with a 34-yard touchdown pass from #18 Smith to #1 Jamarcus Robinson. #20 Kamarion Robinson ran in the 2 point conversion giving the Bulldogs the lead, with the score 29-22.

This was still the score when the clock expired on the 3rd quarter.

The Bulldogs scored early in the 4th with a 47-yard touchdown pass from #18 Smith to #3 Howard Jackson. The PAT went good, lengthening the Bulldog lead to 36-22.

The Colts responded with a well-sustained drive that ended with #12 Reliford completing a 13-yard touchdown pass to #9 Green. The PAT was no good, which made the score 36-28.

There was very little time left on the clock and the Colts had no timeouts left, so the Bulldogs could have just kneed out the clock but Coach Wes Johnson elected not to. #2 Joseph ended up running in a 29-yard touchdown and the Bulldogs then chose the disrespectful option to go for 2. #4 Tyre Garrard got the 2 point conversion making the score 44-28.

When the clock hit 0’s the game was still 44-28, with the Bulldogs walking away with the win.

The Bulldogs go on the road to face the Great Crossing Warhawks on Sept. 27.