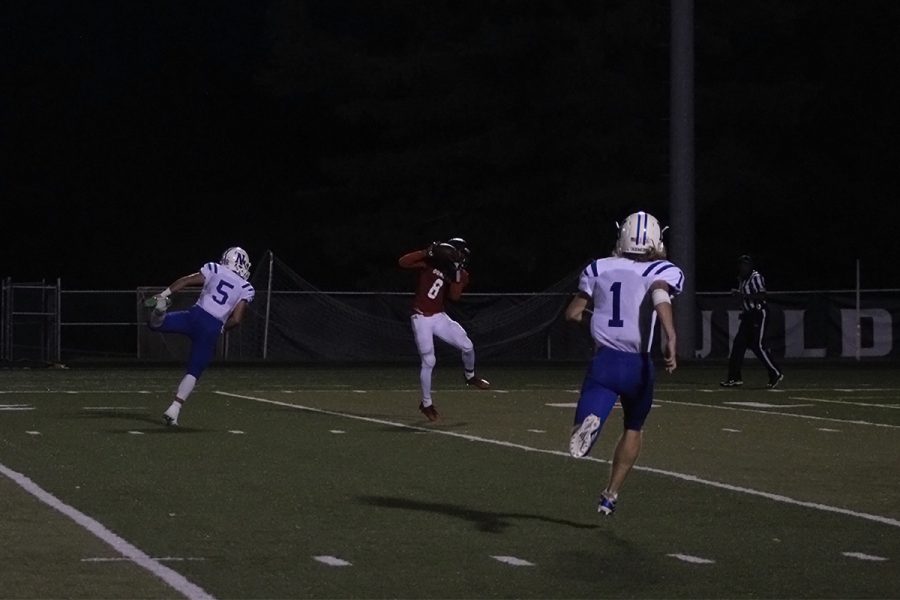 #8 Frank Illunga, receives a pass to go on to score a touchdown for the Bulldogs

The start didn’t look hopeful. The Bulldogs slumped onto the field with low energy that was reflected by the crowd.

On the opening kick, Dunbar got called for an offsides penalty allowing #6 Jacob Bowman for the Jaguars to get the ball to mid-field.

North Laurel was able to put together a sustained drive that lasted 4:28 and was capped off by a 19-yard touchdown run by #6 Bowman. The Jaguars tried for 2 but fell short, making the score 6-0 with 7:32 left in the 1st.

Dunbar got the ball at their own 35-yard line and hit it big on the second play with a screen pass from #18 Jake Smith to #2 Mitchel Joseph that went 35 yards. It got called back due to holding on the play, and the Bulldogs went 3 and out.

The defense showed up on the Jaguars’ second drive and forced them to punt the ball. The 1st quarter expired with North Laurel on top 6-0.

The 2nd quarter didn’t start well for the Bulldogs with #18 Smith throwing an interception which gave the Jaguars the ball on the Dunbar 9-yard line.

The Jaguars capitalized off of the good field position with a touchdown run from #8 Grant Woods. They went for 2 and got it with a run from #12 Konnor Robinson. The score with 11:33 in the half was 14-0 North Laurel.

Nothing else big happened in the remainder of the half and the Bulldogs went into the locker room down 14 points.

Everything would turn around for the Bulldogs in the 2nd half, though.

The ball was brought to the 38-yard line on the 2nd half kickoff. The Bulldogs first drive was marked with a 14-yard through from #18 Smith to get the Bulldogs into the red zone, then a 6 point and 3-yard throw by #18 Smith to #8 Frank Illunga. With the PAT going through the uprights the Bulldogs were on the board with their first score and were within a touchdown of tieing the game, with the score 14-7 North Laurel still on top.

With a facemask penalty on the kick, the Jaguars got the ball at mid-field but were unable to do anything going 3 and out.

The Bulldogs hit an explosive play with a 68-yard screen to #1 Jamarcus Robinson that went for a touchdown early in their drive. With the extra point, the Bulldogs tied the game at 14 with 7:25 left in the 3rd.

The Jaguars were unable to do anything on their 2nd drive of the half and went 3 and out just like their first drive.

The Bulldogs marched the field on their 3rd drive, but hit a roadblock and had to face 4th and 3 in deep North Laurel’s territory. Coach Wes Johnson made the decision to go for it. The play call had #2 Joseph run the ball to the outside. He used his speed and power to pick up the 1st down and keep the drive, and Dunbar’s hopes of winning, alive. And it was #2 Joseph that ran in the 6-yard touchdown to end the drive. The extra point was good and Dunbar took its first lead, 21-14, with 3:22 left in the 3rd.

North Laurel took over on offense after the kick was taken to their own 30-yard line. The Jaguars got a jolt of life when #6 Bowman ran for 9 yards. The drive exploded right before the end of the quarter with a 38-yard quarterback keeper by #5 Dalton Sizemore.

The 3rd quarter expired, the score still 21-14 with Dunbar still on top, but North Laurel had the ball on the Dunbar 9-yard line.

The last quarter saw a 6-yard touchdown run early by #12 Robinson for the Jaguars. They weren’t planning on tieing the game, though. The Jaguars were lined up to go for 2, but the Bulldog defense blue up the play to hold onto their lead. The score was 21-20 with 11:50 left in the game with Dunbar on top.

Dunbar brought the kick to their own 38-yard line. Early in the drive #18 Smith threw a screen that was almost picked off by a North Laurel corner. But then the next play, #18 Smith dropped back on a pass and threw it deep. A North Laurel defensive back went up for the ball and tipped it and the ball fell right into the hands of #1 Robinson, who took the ball 68 yards for a Dunbar touchdown. With the PAT going through the uprights, Dunbar extended their lead to 8 points, making the score 28-20 with 10:53 left in the game.

The Jaguars fumbled the kickoff but were able to recover it. Their drive featured several big runs by #5 Sizemore, #6 Bowman and #8 Woods. The drive was capped off with a 2-yard touchdown off of a quarterback sneak by #5 Sizemore. The Jaguars went for 2 to try and tie the game, but #5 Sizemore mishandled the snap causing a fumble and for them to not get the conversion. The score was 28-26 Dunbar with 8:34 left in the game.

North Laurel went for an onside kick, but Dunbar was able to come up with the ball and got started their drive from their own 48-yard line. The Bulldogs were unable to do anything the ball and went 3 and out.

The punt was fair caught by the Jaguars at their own 24-yard line. There was still plenty of time on the clock, so North Laurel stuck to their ground and pound offense. The Bulldog defense showed up strong after the Jaguars pushed to mid-field, however. The Jaguars were faced with a 3rd and long situation. Their quarterback, #5 Sizemore, dropped back to pass but was blind-sided by #17 John Law, dropping the quarterback for a huge loss and making a very crucial play to keep the Bulldogs alive. Unable to get the 1st on the next down the Jaguars turned the ball over on downs.

Dunbar may have been up, but they needed another touchdown to put the game away. The Bulldogs were putting together a well-sustained drive until #18 Smith was sacked for a huge loss. But that didn’t silence the Bulldogs. They answered back with a 35-yard touchdown through from #18 Smith to #3 Howard Jackson. With the extra point, the Bulldogs put the game away extending their lead to 9, making the score 35-26 with 2:19 left in the game.

Barring a miracle, the Jaguars were out of the game. They didn’t get one.

The Jaguars brought the kickoff to their own 38-yard line, but the Bulldog defense proved to be too much for them to handle and they turned the ball over on downs.

With under 2 minutes left on the clock, the Bulldogs knelt out the clock and won, in a thrilling come from behind victory, 35-26.

The Dunbar Bulldogs go on the road for their next game to face the Boone County Rebels.