By eliminating the 3-point stance and kickoffs, their good intentions are actually causing more danger to young players. 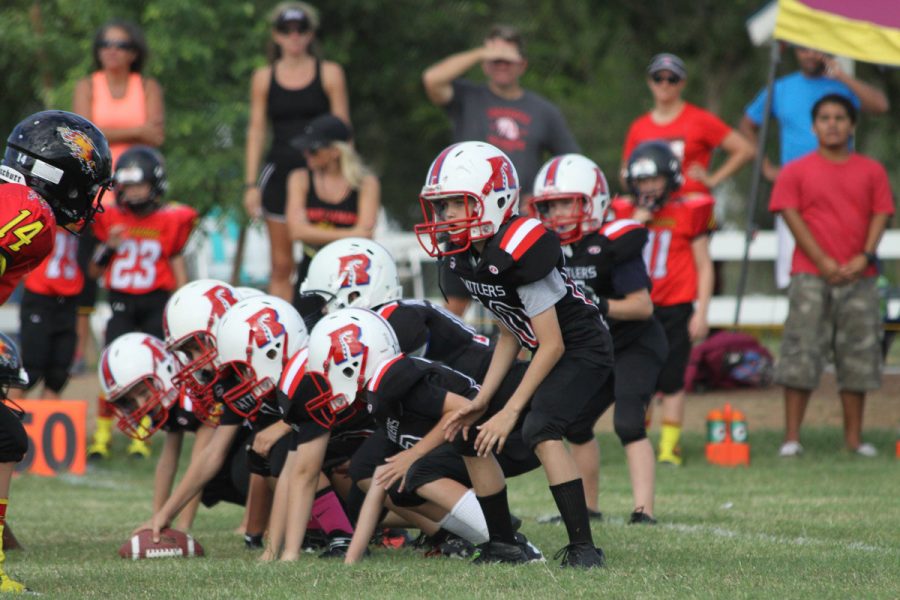 A Pop Warner Football team lining up on offense about to run a play. The front line is displaying the now banned 3-point stance.

Head injuries have become increasingly common in football, with about 79% of players getting at least one concussion in their career.

Pop Warner Football is trying to eliminate these injuries in their younger leagues, but this could be hurting more than helping.

The first way they are trying to prevent injury was in 2016 when they banned kickoffs for their bottom 3 leagues. They have banned it in all leagues for the upcoming season.

This, however, was a move that doesn’t help kids prepare for how the game is played on the next level.

Once a player gets to middle school, there are live kickoffs in which they could be getting hit by people running at full speed.

What if the player has never experienced a hit with that type of force behind it? If they aren’t prepared to handle the hit, it increases the likelihood of injuries.

In a middle schooler’s brain, the prefrontal cortex is still very much underdeveloped. This area of the brain deals with memory and impulse control, and a brain injury at this stage could prevent this area from fully developing.

Some wonder if the kickoff should be banned for football entirely, but if young players are taught to take the hits delivered, the part of football that is considered the most dangerous could be just as safe as the rest of the game.

The other way Pop Warner is trying to create a safer game is through eliminating the 3-point stance in their bottom 3 leagues.

The 3-point stance is used by offensive and defensive linemen, and in some formations, the running back. The purpose of the stance is to get a more explosive first few steps to block or get a stronger push through a gap.

The reason for this ban is because it can lead to helmet-to-helmet contact on the line. However, if a coach is teaching proper technique, a player’s head should never dip. There won’t be contact if the players are able to see what is in front of them.

There are also many dangers to using a 2-point stance over the 3-point. The 3-point stance was designed specifically to put linemen in positions to give hits, but more importantly, to take hits. With going from a 2-point stance players aren’t as low as they would be in a 3-point, and they don’t have their feet set the way they should be.

This poses the issue of head injury even more.

With the changes Pop Warner is implementing to make the game safer, they seem to be making things more dangerous by not preparing young players.