Only YOU can prevent coronavirus! 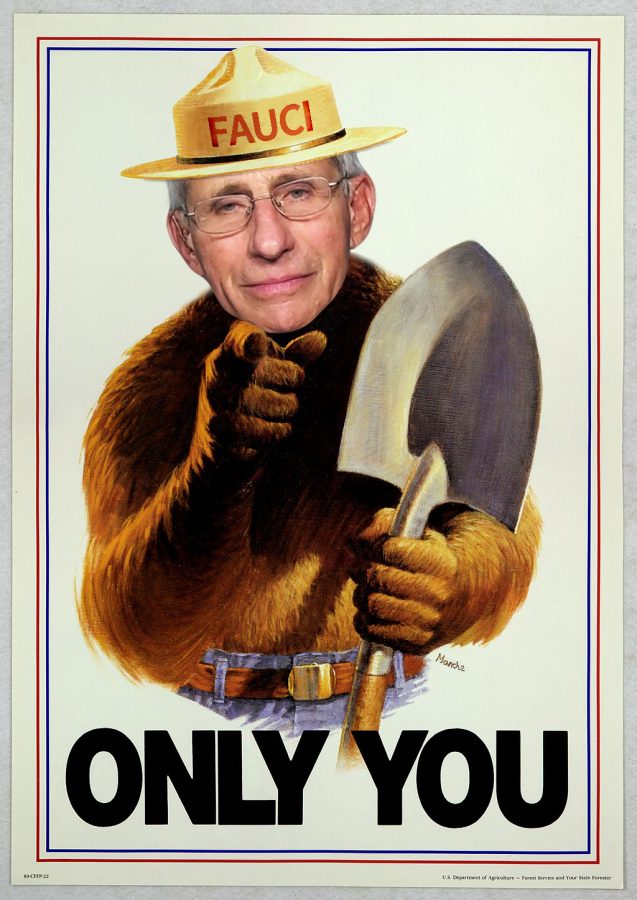 what the title says

In a new move of great progress and innovative marketing, the coronavirus task force revealed in a briefing last Sunday that they have a new mascot, Fauci Bear.

Trump expressed concerns about this opinion, saying “He’s completely wrong, like, totally wrong, he doesn’t know what he’s talking about. We should fire him.”

According to Creative Director Mike Pence, the character of Fauci Bear was designed to increase the relevancy and popularity of the coronavirus task force following Trump’s May 5 statement that the task force would be “phased out.”

This is where I would normally put a quote from Mike Pence, but to be completely honest, I’ve never heard the guy speak. So we’ll just say that when questioned about the design of Fauci Bear and who came up with such a brilliant idea, Mike Pence stood menacingly behind Trump and stared at a specific point on the back of his head.

President Trump said, “Really, it was a brilliant idea. Totally original, Mike Pence came up with it on his own. He should trademark it. He really should.”

When questioned about the similarities of Fauci Bear and Smokey Bear, an anonymous source in the coronavirus task force stated that there were many mascots in the running to represent the task force. Some of the other mascots that were considered included Allstate’s “Mayhem” and Mr. Clean, who has recently been in the news due to President Trump doing a public promotion of their line of beverage products.

In the end, it was decided that Fauci Bear was the best option because it shifted the responsibility of coronavirus onto the citizens. YOU are the only one who can stop coronavirus. Not us.

Some critics believe that this was actually an effort to distract people from internal conflict in the task force. One of the most notable incidents was the exit of Joe Grogan, who got so aggravated by people confusing him with Joe Rogan that he had to resign.

It doesn’t help to have a name one letter from someone that is well-known for their drug use when you are a former pharma-lobbyist, especially in the midst of a national pandemic.

The task force also decided to hold a concert on the live stream before the next briefing because some members were upset after learning from their grandkids that Ninja had more viewers watching him play Fortnite than the task force had watching them discuss the future of the country. Trump called in a favor from his good friend, Kanye West, to play some of his favorite songs.

The task force specifically requested “No More Parties in LA” and “Ghost Town,” but unfortunately the public opinion has been leaning more towards “Can’t Tell Me Nothing” and “Yikes.”

More recently, there has been great debate about reopening businesses across the country because apparently the frog likes to dip its toes to test the water before jumping back into the frying pan.

Elon Musk notably tweeted in support of reopening factories because he wanted to get Tesla factories up and running.

In the meantime, philosophers across the nation finally learned that socioeconomic status is equivalent to your value as a human being.