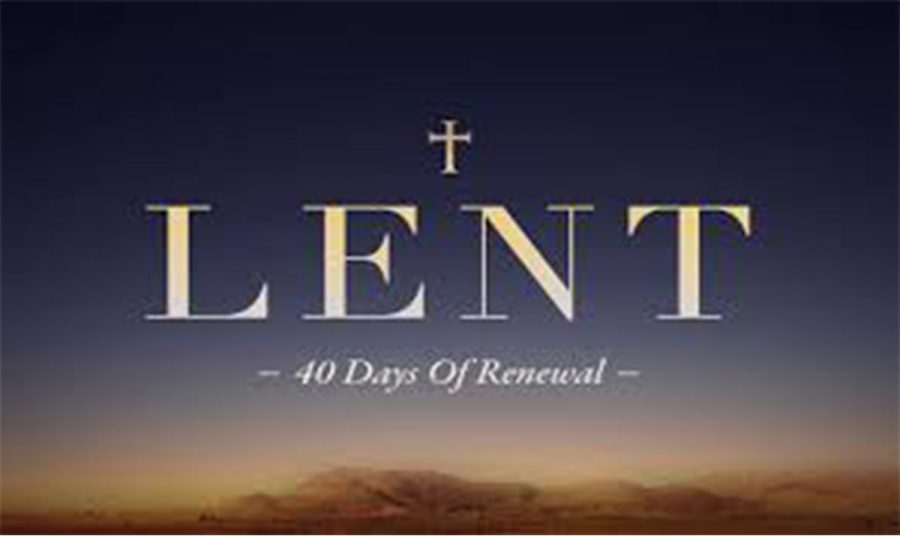 Lent is a 40-day period, not including Sundays, of fasting that resembles the length of time Jesus Christ walked in the desert without food or water. A select few individuals fast their meals for the entire season. The majority of others give up a favorite of theirs: sweets, social media, TV, caffeine, etc.

“I spend an absurd amount of time on my phone, mostly scrolling through Instagram. I felt the most challenging thing for me to give up for 40 days would be the thing I spend my most time doing,” she said.

The season gained the name ‘Lent’ from its old English definition: lengthen. This period of the Christian calendar occurs in the spring when days become longer.

Members of Christianity use this time to pray and show penance as they recognize the events leading up to the Easter season — the time in which Jesus was crucified, died, buried, and rose from the dead three days later.

Lent begins on a Wednesday referred to as Ash Wednesday. During the Ash Wednesday church service, a cross of ashes is placed on the attendee’s forehead. The mark is a sign of mortality and penitence.

These ashes are a reminder that death is imminent, sins must be recognized, worshippers must alter their lives for the better, and that without God humans would simply be dust and ashes. The ashes used for the markings are made of burned palm. The palms are burned on the previous Sunday — Palm Sunday.

The day prior to Ash Wednesday is known as Shrove Tuesday. The name originated from the word ‘shriven’ — which, according to Merriam-Webster’s dictionary means, to administer the sacrament of reconciliation to, or to free from guilt. Since the start of Lent always occurs on a Wednesday, members of the church confess their sins the Tuesday before, rewarding the day with the name “Shrove Tuesday.”

Shrove Tuesday is not the only name given to the 24-hours before Ash Wednesday. Another common title is Pancake Day. The name was born from an old English custom of consuming glutinous foods in the home before the season of Lent begins. Most people during this time only had an excess amount of eggs and milk. They commonly used these ingredients to make pancakes.

‘Mardi Gras’ is another label for the day. Mardi Gras in French means “Fat Tuesday” which also goes off of the idea of consuming food in the preparation of fasting. During the celebration of Mardi Gras, people attend carnivals and fill the streets with singing, dancing, and marching while dressed in festive attire.

The period of Lent is represented with the color purple. In churches, purple can often be seen as drapes, altar frontals, and the robes worn by priests. The color has immense symbolism. It represents pain and suffering, as it is said that the garments Jesus wore leading up to his crucifixion were purple. The color of royalty is also purple, allowing Jesus to be represented as the King in the Christian faith.

Lent is a time in which followers of the Christian faith give up something important to them in the hopes of understanding the suffering Jesus went through during his crucifixion. They use this time to memorialize their Lord and Savior’s sacrifices for all man-kind.