My Life as a YouTuber

WPLD Broadcast editor Sloan Scroggin has his own channel 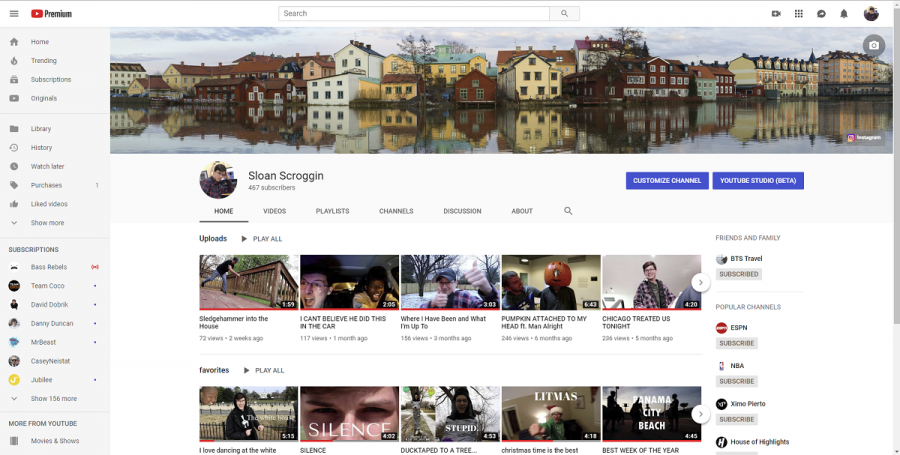 Sloan's YouTube channel homepage. This is where all of his videos appear.

In summer 2016, two months before I started eighth grade, I made my first YouTube video.

It was titled “Sloan Water Bottle Work Hard Video.” I remember that day vividly. I stuck my phone onto my mom’s old tripod and spent the summer day filming the video. One of my proudest moments was editing that video on Windows Movie Maker.

The late nights, long weekends, seven-hour editing sessions were all worth it in the end.

From that moment on, YouTube was my second home and where I discovered my passion.

Ever since I made that video two and a half years ago, I have been all in.

However, I have to admit, my uploading schedule has been a roller coaster. At one point I uploaded every day, but now I upload every two months.

Even though YouTube seems like a lot of fun all the time, and it is, it’s hard trying not to bug everyone around you with your camera. A lot of times I struggle being that annoying vlogger that is always filming. I try to respect everyone’s boundaries and make sure they want to be filmed, but I still get ridiculed all the time for it.

If I wanted to film myself eating a bowl of cereal for 10 minutes and put it on the web, I could do that. It’s my outlet for whatever creative project I want to do.

I know this may sound cheesy, but YouTube has shown me how to express myself the way I want and the way I can be my happiest and my best self.

Another thing I find really interesting about it is the fact that I had no idea what I was going to be doing on YouTube when I first started. I basically just kept throwing random clips together until I was satisfied with the product. My work has slowly changed over the years into what I have now. It’s a weird mix of film/cinematography and my horrific attempt at being funny.

Making videos is my passion and it will be for a very long time. I hope everyone else can find something they love to do.