My Life on the Rink

A reflection of roller derby and all it entails 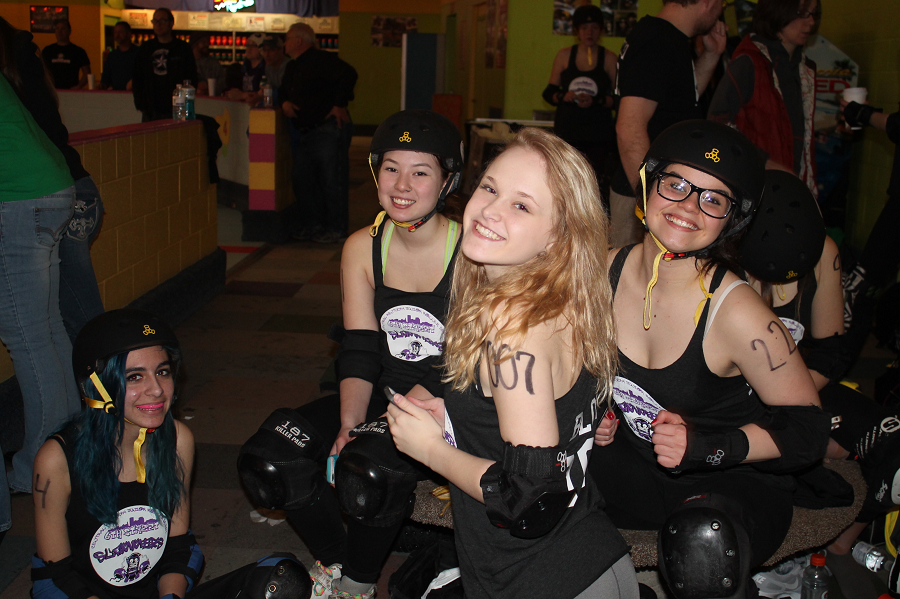 I tried roller derby, and I never looked back

From an unbiased point of view, I can understand the reservations someone might have about participating in roller derby. I have to admit it: I had them too. I’ve seen the San Francisco Bay Bombers sling each other like rag dolls and show absolutely no mercy on the track; I’ve seen the broken bones and bleeding faces and bruised limbs women have in the movies. But, despite all the negativity and “Don’t do it”s I got, I decided to give it a try, and it was the best decision I’ve ever made.

All my life, I was the one holding onto the wall at Champs taking baby steps while everyone else flew past me. I never really learned how to skate, and half the time I just pushed myself around on my toe stop. Then I discovered roller derby. One of my best friends from middle school had been playing derby since the junior team was created by Dunbar English teacher Wendy Turner, and, as a member of the Lamplighter, another major activity Mrs. Turner sponsors, I always heard her talk about it. One Tuesday I had free time on my hands, so I decided to go to one of her practices. It was winter, and the team practices in a warehouse with no heating or cooling – I was freezing the second I entered the building. About eight girls were on the track at the time, and I was amazed at how easy it looked – the girls were skating and spinning like it was all they’ve ever known. I watched them scrimmage, and I instantly fell in love.

I went home with all the sign up papers and told my parents about it. At first, they were skeptical. Their initial response was one full of “no way” and “I will not pay for you to get shoved around on skates.” But they could see how interested I was, and they eventually caved. The next practice was coming up, and I was so eager to get out on the track. I borrowed my friends mom’s gear (who played on the woman’s team) and found some old skates in my basement that I had bought from a garage sale about a year prior. I went to practice and tried countless times to get my gear on the right way. After a long ten minutes, I was out on the track, and within the next five, I was falling on my butt. Practice was over, and I seriously considered giving up and forgetting the whole thing. But I didn’t. As I continued attending practices, I could feel myself getting stronger and faster – I almost never fell anymore. I wasn’t going to let anything stop me from playing roller derby.

The Junior Roller Derby Association (JRDA) requires skaters to take skills tests before they are eligible to bout (a bout is the roller derby name for a game). There are three levels, each requiring certain skills to reach the level. Just like anything else, participants start at level one. According to the JRDA, by passing level one, “the skater has demonstrated the basic skating competency necessary to safely engage in non-contact (positional blocking) play.” Eventually, players work themselves up to level three, and are therefore eligible to bout. After a year of playing roller derby, I have leveled up and am now competing full contact.

Within a year of playing, the team became my second family. From the minute I walked into that warehouse, I felt at home. Because of the constant support from my teammates, players on the women’s team, my coaches and my friends, I wouldn’t want my second home to be anywhere else.

“The environment is so nice,” said teammate Ashley Holsclaw. “Everyone is always really friendly and supportive of each other.

Roller derby has taught me so many things you really can’t learn anywhere else: I learned confidence, I learned to never let anyone treat me less than how I thought I should be treated and I made new friends that I now consider my sisters. When I asked my teammates what lessons they have gained from competing, I heard answers such as communication skills, building confidence and improving teamwork skills. In addition, roller derby provides athletes with a safe way to channel their anger and frustrations.

“It’s definitely an outlet for my anger,” said Dunbar student and roller derby participant Rachael Prewitt. “I learned how to hit people and not regret it, even though sometimes I say I’m sorry.”

“As far as what it means to me,” says coach Jack King, “it’s easily the most rewarding thing I’ve ever done in my life.”

There is one very significant thing I learned from derby. Despite its cheesiness, I learned that when you fall you have to get up. Fast.