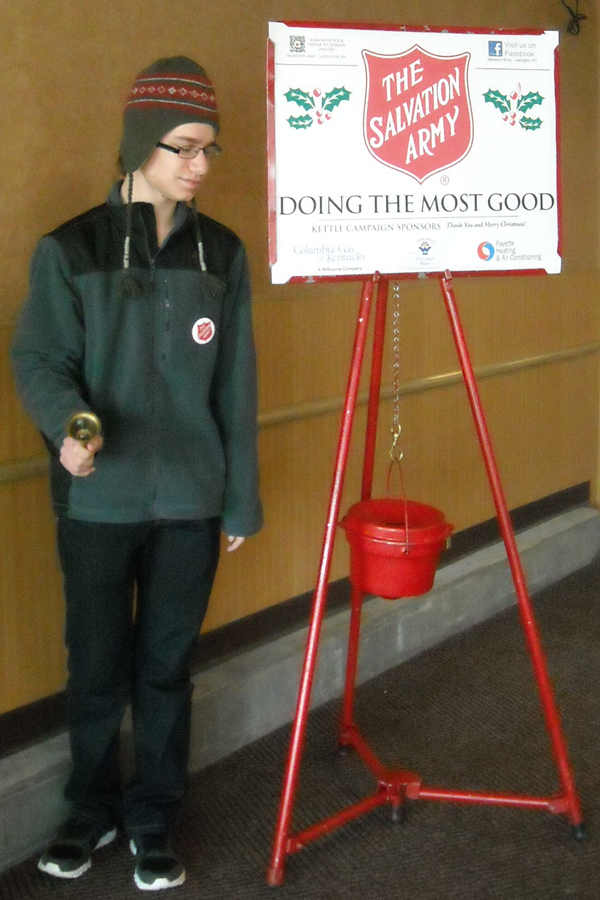 It’s a tradition that seems as old as the holidays themselves–in front of grocery and department stores, you’ll see bundled-up volunteers from all walks of life ringing bells for the Salvation Army. I’ve often wondered what it would be like to volunteer, so, one Saturday I decided to find out.

Signing up offered the surprise of its simplicity. I only needed to give my telephone number and address.

I had three options for service. I could ring for four hours in the morning, five hours in the evening, or nine hours all day.

I decided to take a four-hour morning shift. When I asked if I could have a break, I was promptly told, “No.” I would have to ring the bell continuously.

On Saturday morning, I collected the kettle from the service desk at the Beaumont Kroger. I was told to set up inside rather than outside, which I felt was odd–but I certainly didn’t complain.

Like most who ask for donations, I thought I’d be ignored by the shoppers who passed. Although that was mostly the case, I didn’t realize I would experience the generosity and kindness I found.

For example, many donors gave bills instead of pocket change. One kind man promised to return after shopping and he did–his hands filled with coins–as he left the store.

Their kindness went beyond monetary donations. Many passersby went out of their way to be kind to me. One even offered to buy me coffee from the nearby Starbucks. I declined, but his care and selflessness greatly impacted me.

When it was over, I had collected $50 worth of donations, a blister on my thumb, and the never-ending sound of bells in my ears, but I had gained experiences that made it worthwhile.

I’d advise volunteers keep the Salvation Army in mind. I thoroughly enjoyed bell-ringing, and I would recommend it highly.

Although it may require a serious time commitment, and may entail some sacrifice, nothing could be a better use of four or five hours.