The continued rise in local COVID-19 cases led the district to cancel most activities that could spread the virus. 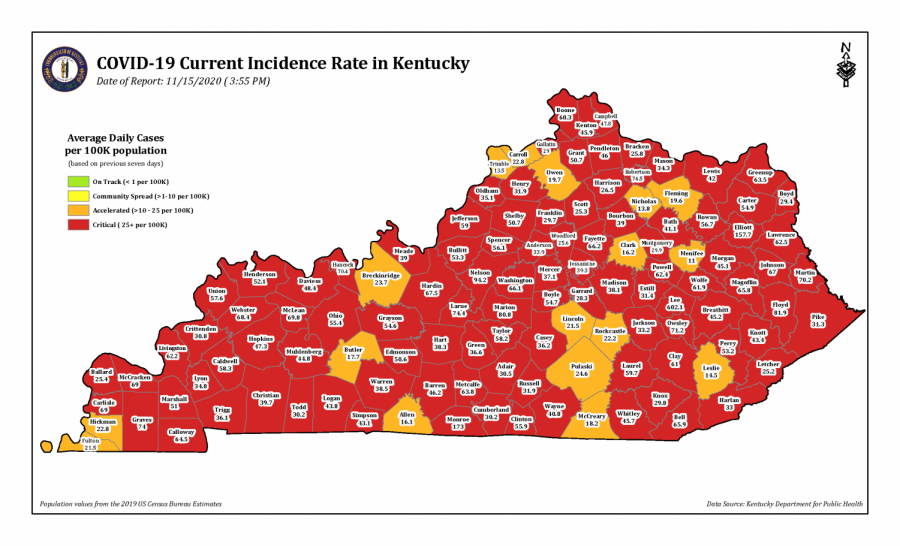 More than 100 of Kentucky's 120 counties are currently in the red zone. Unlike in previous days, none of Kentucky's counties are in the "yellow zone," which indicates community spread but not accelerated transmission of COVID-19.

Three days after Fayette County public schools asked students to choose between in-person and online learning during the spring semester, FCPS Superintendent Manny Caulk announced that all FCPS schools would stop providing targeted services by Nov. 20. And on Sunday, FCPS Chiefs of School James McMillin and Tracy Bruno announced that FCPS is “pausing all athletics and extra-curricular activities” except football due to the recent increase in COVID-19 cases.

FCPS started targeted services in October to provide in-person instruction to small groups of students. Dunbar’s Administrative Dean, Tonya Merritt, said that over 450 Dunbar students who were failing two or more classes at the end of the first grading period were invited to participate, although only 256 students were participating in the program.

He added that despite Governor Andy Beshear’s recommendations, many families will likely gather during Thanksgiving, which Caulk said “could drive community spread.” Because the semester will end three weeks after Thanksgiving break, Caulk made the decision to end targeted services for the rest of the semester.

McMillin and Bruno similarly explained that the decision to pause athletics until at least Thanksgiving was “not a response to a problem on our teams,” but to the broader increase in community COVID-19 transmission.

In his email, Caulk also mentioned the district’s plans for January.

While the goal is to have in-person learning for students and families who want it, he said that “if Fayette County’s incidence rates are in the red as we get closer to January, then in-person learning could start as NTI: 2DL until cases decrease,” although targeted services could resume.