Around 50 protesters gathered on the same night that the governor announced updated guidance for returning to school. 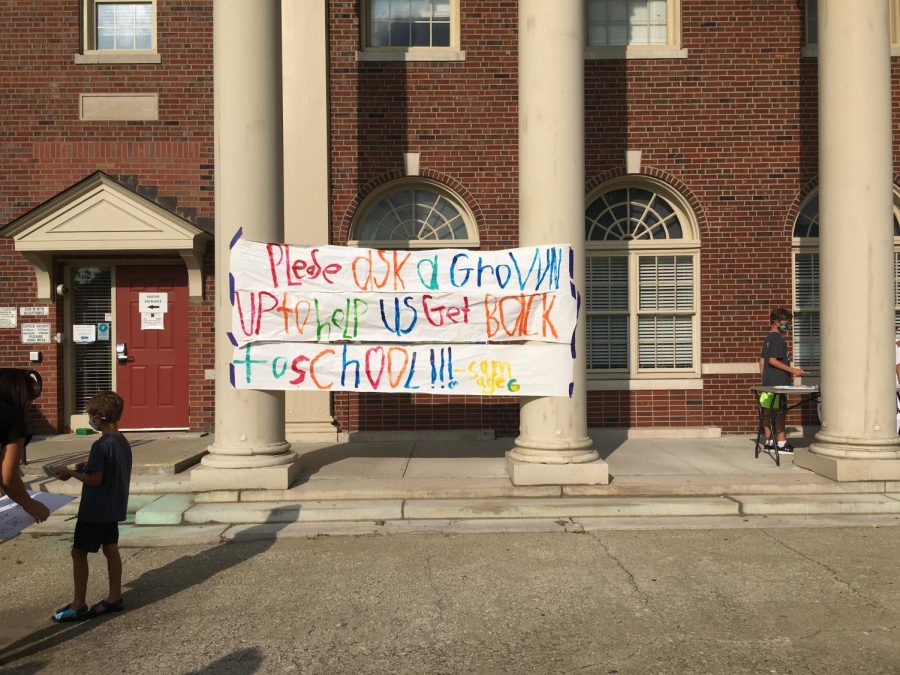 Protesters taped a handmade banner outside the FCPS building on Main Street.

On the evening of Sept. 14, a group of around 50 parents and children gathered outside the office of Fayette County Public Schools to protest Fayette County’s virtual learning policy.

The protest was scheduled to coincide with the FCPS Board’s monthly virtual planning meeting. However, the board announced that it will not decide whether to resume in-person instruction until the meeting on Sept. 28.

The protest also occurred on the same day that Governor Andy Beshear announced updated guidance for returning to in-person instruction on a district-by-district basis. The guidance indicates that districts can consider in-person learning if they have no more than 10 new COVID-19 cases per 100,000 people each day.

School Board member Tyler Murphy announced on Facebook that Fayette County has an infection rate between 10 and 25 cases per 100,000 people, meaning the district is “advised to remain with remote instruction.”

Many of the parents at the protest said that they wanted FCPS to allow parents to decide whether to send their children to school or not.

Angela Costa, the mother of two Dunbar students, said she would be willing to sign a form asserting that she “[is] not going to sue the school if anybody gets sick” if it meant her children could return to in-person schooling.

Parents expressed a variety of motivations for wanting their children back in the classroom. Many felt that the quality of virtual instruction was worse than that of traditional education.

Hetzel said she felt UK was “handling [COVID-19] well” and that FCPS could do the same. As of Sept. 14, UK had a total of 1732 student cases of COVID-19 (including recovered students) and 102 new cases. These new cases made up more than half of Lexington’s total new cases.

Ashley Gann, the parent of two high school students, was worried about the possible mental health and equity consequences of virtual learning.

“When we look at risk, we can’t just look at the risk of COVID, which we know is low for school-age children,” she said, but also the risk of mental health problems like “anxiety, depression, [and] suicidal ideation.”

Gann also said she was also concerned about potential achievement gaps and the struggles of children facing food insecurity.

Numerous studies have found that food insecurity has increased nationwide during the pandemic. To combat this rise, the district has established 50 sites for free food pickup for anyone age 18 and younger from 11 a.m. to 1 p.m. on Mondays and Wednesdays. At the Sept. 14 board meeting, Child Nutrition Director Michelle Coker reported that, on average, more than 4000 children receive meals from the district each day.

Families can also find support for meeting their basic needs at their school’s Family Resource and Youth Service Center or by submitting a digital request.

Many researchers also predict that the pandemic will increase educational achievement gaps and student mental health concerns. In response, the district has expanded social/emotional services, although it remains to be seen how effective these measures will be.

Other parents said that technology issues were a major problem for them.

Candis Morgan, the mother of a kindergartener and two other children, said that her daughter had gone through “three Chromebooks because they all keep breaking.” She said the sound was not working on her daughter’s current Chromebook, so that “now she has to have just worksheets.”

Nationwide, multiple surveys have indicated that technology problems create a significant obstacle for thousands of students trying to access online learning. Although FCPS has spent 6.5 million dollars to provide all students with mobile devices, there have been some delays in delivery and some reports of malfunctioning devices.

At the board meeting, Technology Director Bob Moore said that the district has received 2000 Chromebooks since the last board meeting and expects 10000 more to arrive within the next week, as well as additional webcams, speakers, and hotspots. He said that FCPS has also contracted help for Chromebook repair.

The protesters generally felt that for these reasons, in-person school was worth the risk of COVID-19.

Other parents thought that returning to school would not increase COVID-19 transmission, although reopenings in Georgia and other states have led to rising infection rates.

“My concerns for my child and other children not getting their education far outweigh my concerns for whether somebody’s going to die at school because of [COVID-19],” Jennifer Rock, the mother of a fourth-grade student, said. “I think the numbers have been inflated. I think everybody has been fear-mongering and has caused a great hysteria about this.”

Other parents and students, however, feel that Kentucky’s COVID-19 infection rate is still too high to safely return to school, especially given the difficulties of social distancing in school buildings.

“I’d rather see my friends over Zoom than in the hospital,” Dunbar sophomore Daksha Pillai said.

While children are less likely to experience severe illness due to COVID-19, some research shows they can transmit the virus to others. Additionally, some children have experienced intense inflammatory syndromes or died as a result of the disease.

The protest was organized in a Facebook group called “Let Them Learn in Fayette County,” which was created on Sept. 1 and currently has over 1900 members.

Another Facebook group, “We Support Fayette County Public Schools,” was created by Ashley Tolson on Sept. 3 to “provide positive support and feedback regarding our children’s education experiences in FCPS… during this difficult time.”

As of Sept. 15, the group, which supports continuing NTI, had over 3200 members.