Many Dunbar students are calling for colleges to drop the requirement that applicants submit standardized test scores. 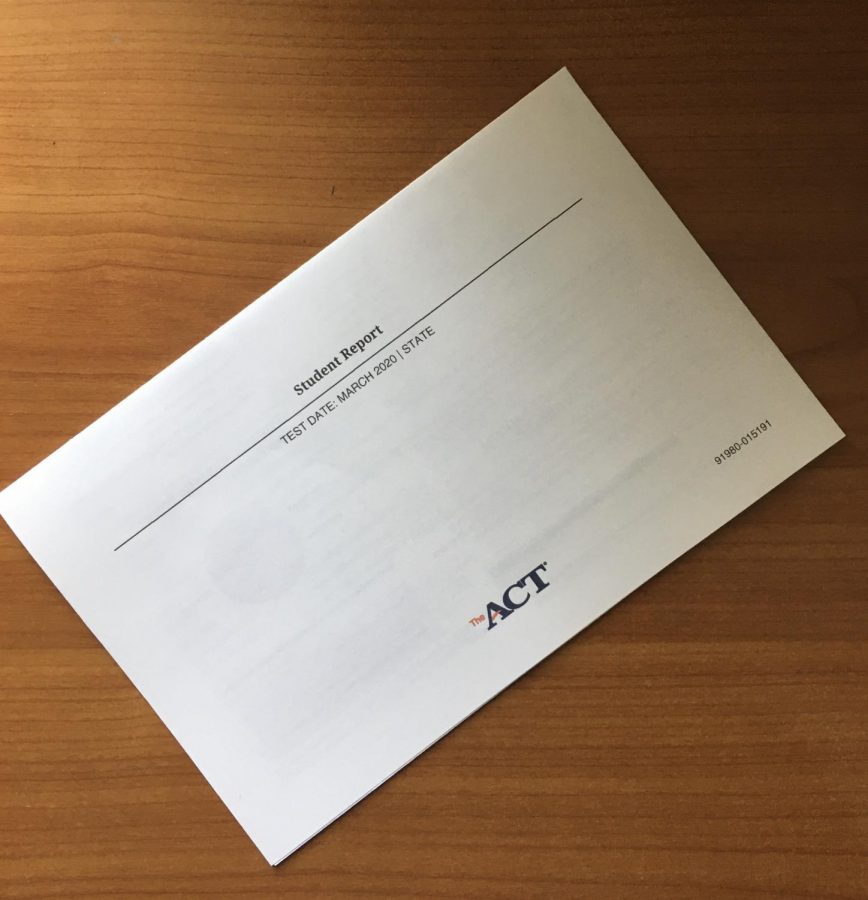 While students who took the ACT on March 10 are getting their scores, those who missed the original test date will be unable to take the exam for months.

Elizabeth Moore, a junior at Henry Clay, woke up sick on the morning of March 10.

“I had a GI bug and was throwing up the night before,” she said. “We thought it might pass and I would be able to take the ACT, but realized at 3 a.m. that I wasn’t going to get over it quickly enough.”

She said that she wasn’t too concerned about missing the test. “COVID cancellations hadn’t started,” she said, “so I was sure that I could test on the makeup day or at least take the ACT I had scheduled in April. Everyone still thought the U.S. would be unaffected. Cancellations started the next day.”

Most sophomores and juniors at Dunbar and across Kentucky took the ACT that Tuesday. But many students like Moore were not so lucky. According to Ms. Pamela Bates, Dunbar’s College and Career Coach, 32 juniors and 20 sophomores at Dunbar missed the March 10 test, including those who normally take the test on a different date because they receive testing accommodations.

Now that all Kentucky schools are closed because of the pandemic, those students will be unable to take the ACT on the state’s make-up day.

The College Board and ACT, Inc., which administer the SAT and ACT respectively, have canceled tests until at least June. These changes are expected to cause around one million high school juniors to miss the chance to take the SAT. Over 70 percent of those juniors are missing a free test provided by their state or school system.

Standardized test scores are usually an important part of the college application process. Alongside a student’s GPA, standardized tests provide a measure of whether students are “ready to take college-credit courses,” according to Ms. Bates.

“It’s not the one deciding factor,” she said, “but it is important.”

As a result, these cancellations are causing anxiety for many Kentucky students.

Autumn Boone, a junior at Beechwood High School in Kenton County, was able to take the ACT on March 10. But she is still concerned about her ability to get the score she wants. “I was planning on taking it this summer and this fall to bring my score up,” she said. “Now it’s a little bit more stressful.”

“Right now I have a pretty good score, but I’m going to be applying to some Ivy League schools,” Moore said. “A couple more times taking that test to push me over the top would have been really helpful, and I don’t think that’s happening at all, even in the next year.”

Some students are less worried. “I had a decent score that I was pretty satisfied with beforehand,” Dunbar junior Zach Susini, who missed the March 10 test, said.

Still, Susini acknowledges that cancellations could create a problem for many students.

“If I hadn’t gotten lucky last year, then I would probably be a lot more worried,” he said.

These problems are especially pressing for students who may not have the means to take standardized tests outside of the regular school day.

The Kentucky Department of Education, or KDE, provides funds for all juniors (and sophomores, when funds are available) to take the ACT once per year. This state-sponsored exam not only allows students to avoid the $52 registration fee, but also provides “equitable access for all students to participate,” according to KDE’s website.

“Many of those test dates are not only more accessible because a district or state pays for them, but also because there’s no institutional knowledge required to register for those tests,” Emanuelle Sippy, a junior at Henry Clay, said. “Those tests are taken at school, often the only test taken during the normal school day. There are also barriers we don’t often think about on a weekend test date in terms of transportation.”

In response to these widespread test cancellations, many students are calling for colleges and universities to go test-optional for the 2020-21 admissions cycle: that is, to not require that applicants submit standardized test scores. This #TestOptionalNOW campaign is being led by Student Voice, a national student-led nonprofit.

Many Dunbar students have taken an active role in this campaign. On April 13, Dunbar junior Gabriella Staykova moderated a virtual press conference discussing the movement.

Other students have participated in virtual letter-writing parties or by signing Student Voice’s digital petition, which now has over 1300 signatures.

“I’m signing because we need to take immediate action to address the inequities faced by the people my age in this time of uncertainty,” Sanaa Kahloon, a junior at Dunbar, wrote.

Kentucky schools like Northern Kentucky University and Midway University have taken note of student’s concerns and are all transitioning to test-optional policies for Fall 2020 applicants. However, as of yet, schools like Kentucky State University are not changing their admission policies, according to Melissa Bell from Kentucky’s Council on Postsecondary Education.

Nationwide, too, dozens of schools are adapting their requirements. The list of schools that have suspended their testing requirements includes prestigious colleges like Williams and Vassar.

The movement is also prompting a broader reckoning with the role of standardized tests in college admissions. Many of the schools switching to test-optional policies are launching multi-year pilot programs to test whether standardized tests should be required at all once the pandemic is over.

Some argue that the pandemic is only exacerbating pre-existing inequities with standardized testing. According to Jamaal Muwwakkil, the University of California Student Regent-designate, success on the SAT most closely correlates with family income, so “the SAT can be seen as a proxy for means.”

“Test scores have a problematic correlation with family income, with sex, and with race and ethnicity. Period,” Andrew Palumbo, Dean of Admissions and Financial Aid at Wooster Polytechnic Institute, said. “Admissions offices do not need a single high-stakes test score to make solid admissions decisions.”

Ms. Bates agrees that standardized test scores are not the best measure of a student’s academic aptitude. “For me personally, what it says is whether a student can ‘standardized test well’ or not. On the ACT, it’s not so much the content that you’re being tested on,” she said. “It’s strategic, more than anything.”

Many FCPS students believe that schools should maintain their new test-optional policies. Sippy believes that the emphasis universities place on standardized testing creates a culture of “teaching to the test,” which “disempowers teachers to have a say in what they’re teaching and students to have agency in what we’re learning.”

Other students, though, are not so convinced. While Susini believes schools should go test-optional for the next admissions cycle, he’s “not sure if it should be a long-term thing.”

Some university officials argue that standardized test scores are a necessary metric because they are not subject to grade inflation, unlike GPAs.

Claudia Marroquin, Director of Admissions at Bowdoin College, which has been test-optional since 1969, admits that “it does take the commitment of resources to really spend the time to go through an application and not rely on a single test score.”

But according to Staykova, that’s not a valid reason to avoid switching to an admission policy that she sees as more equitable.

“It’s easier to plug a 24 ACT and 3.8 GPA into a calculator and see whether a kid’s admitted than to look at a student holistically and look at what they’ve done with their extracurriculars,” she said. “But we know that the easier thing to do is almost never–when it comes to equity policies at least–the right thing to do, nor is it the reasonable thing to do.”