A loaded gun was found on on a student on Nov. 7 at Frederick Douglass High School hours after he entered the school. 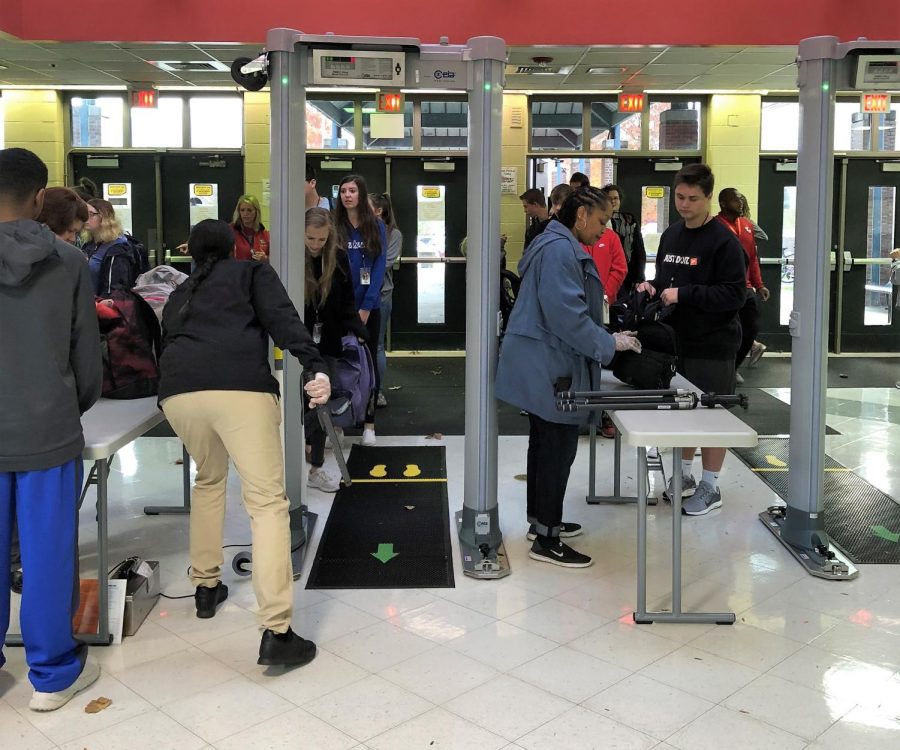 Students have been learning the process of going through metal detectors.

Frederick Douglass High School principal Lester Diaz sent a letter home to parents this afternoon indicating that a student was caught on their campus with a gun. In the letter, Diaz stated that the male student did not enter the building through the walk-through metal detectors and that he checked in after the day had started.

The metal detectors are taken down after students enter in the morning, and people who enter later in the day come in through the front doors to be checked with a metal detector wand as opposed to walking through the ones that are standing. Although the student at Douglass’ backpack was checked, the loaded gun was not found at that time because he had hidden it in a zipped binder inside his bag.

It wasn’t until the student got in trouble later in the day for allegedly throwing a laptop at a teacher that his bag was checked again. At that time the gun was discovered and the student was apprehended.

Diaz stated that he would “continue working with the contracted security ambassadors to revisit their search procedures.”

Fayette County has a contract with Greene’s Investigations, LLC, to provide metal detectors and “safety ambassador” personnel to schools. According to job search site, Indeed.com, Greene’s Investigations is currently hiring. The part-time job description states, “screening for school security and hall monitoring for Fayette County Public Schools,” and it pays $10 an hour.

Because of this incident, a question on many Dunbar students’ minds is: “exactly how much safer are we with the metal detectors?”

“I think [today’s incident at Douglass] shows that metal detectors aren’t necessarily the answer that is going to save us all, and that bad things could still happen,” junior Anthony Mondelli said.

Dunbar Principal Betsy Rains said, “I am grateful the administrative team at FDHS found the weapon, and no one was hurt.”

Dunbar’s student body is still getting used to the new process of entering the building now that metal detectors are in use.

On the first morning of full implementation, Oct. 29, there was a long line outside the front doors at 8:22, three minutes before first block. Tardies were put on hold so that every student could go through the lines.

“Using metal detectors and wands is a new procedure at Dunbar and we are learning how to be efficient with searches and how to implement the procedures without limiting the use of backpacks and what students can bring to school,” said Principal Rains.

Teachers were stationed out front to remind students to place their phones and keys in their bags, and to have their IDs visible on the lanyards around their neck, but students weren’t always prepared. The hold-up was because students were getting stopped by the buzzers.

As of Nov. 7, Dunbar has had the metal detectors turned on for seven days, and bags have been checked since Oct. 31. Yet, some students said that they haven’t felt that the bags are checked thoroughly enough.

“I feel like we aren’t checked enough because in order to check [bags] thoroughly it would take a lot of time,” junior Nate Rich said. “I don’t really know the solution, though.”

There are nine metal detectors in the gym foyer and three in the front foyer, and students walk through them to enter the building.

If a student sets off the alarm, he or she has to step back, remove what might be setting the detector off, and then go back through again. Administrators, teachers, school resource officers, and the contracted safety ambassadors are on hand to oversee the process each morning.

“I genuinely feel safer at Dunbar, but you can never stop everything,” junior Jenna McCauley said. “There are so many ways to sneak things in, and that’s just the sad reality we live in.”

The metal detectors are part of a 10-point safety plan Superintendent Manny Caulk proposed last year. At the time, he said the plan would make the district among the safest in the country.

The $13.5 million plan was funded through a five-cent property tax increase approved by the district’s board of education in July.

Many students said that they agree that although the incident at Douglass was unfortunate, it shows the necessity of some kind of action.

Senior Kayla White said that because Dunbar just started the process, she feels like things will get better. “They’re doing their best,” she said. “At least they’re trying.”

“We have displayed at Dunbar a culture where safety is a team effort involving a commitment from students, parents, and staff. We will learn from what happened at FDHS to improve our safety procedures,” said Principal Rains.

Correction: An earlier version of this article stated that the administration was allegedly tipped off by the STOP Tipline. We have updated our article to show that the bag was rechecked because the student got into trouble.