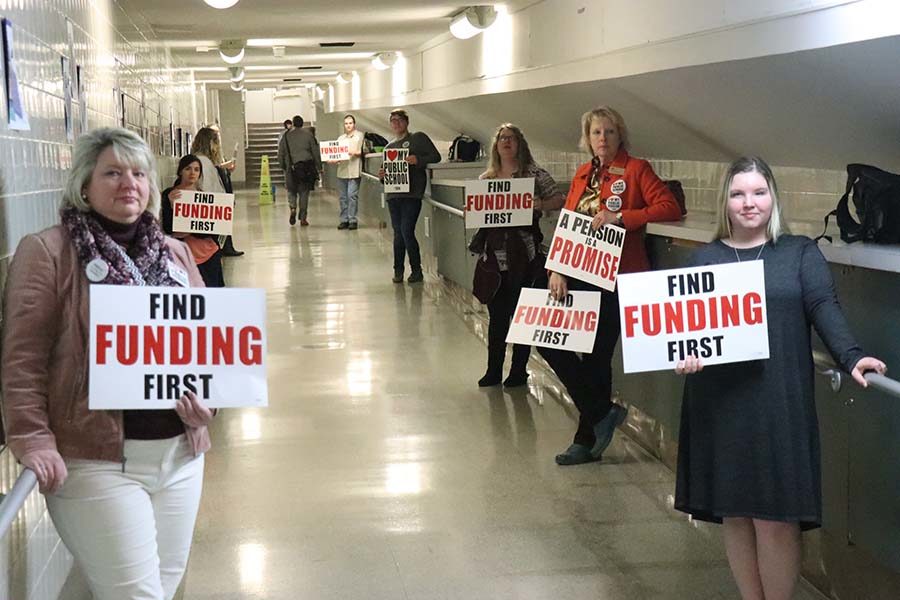 In the midst of a pension crisis, teachers in Kentucky have been fighting for their “inviolable contract” for nearly a year. A group of Dunbar teachers and students went to Frankfort on Feb. 13 to meet with legislators to discuss pension reform.

“It was a great experience,” said junior Abigail Wheatley, who has been following the pension issue. “I care about my teachers, and I can see how this is hurting them.”

The bill that was initially presented by Governor Bevin was widely criticized, so lawmakers have been revising the proposal, and the new “SB1” was unveiled on Feb. 20. Many teachers are still unsatisfied.

Ms. Stephanie Winkler, president of the Kentucky Education Association, told the Courier-Journal that the Senate’s Republican-crafted bill doesn’t go far enough to honor the promises made to public-school employees.

“Teachers across Kentucky are not happy with lawmakers because they have not been funding their responsibilities,” she said. “The way it’s saving money is putting the brunt of the costs back on the employees, which is not fair.”

Dunbar citizenship teacher, Mrs. Sharessa Crovo, has been active in speaking out on behalf of teachers during this process. She worries that the general public won’t understand the implications on teachers because they will not “feel” the repercussions of this bill.

“As I read through the bill last night I was discouraged and felt like now is the time we need to stick together,” she said. “They will try to divide workers, and pit the veteran vs. the new teachers.”

One of the largest complaints is that cuts to teacher benefits doesn’t make sense when other means of revenue haven’t been discussed.

“Legislators need to find funding first,” said Mrs. Crovo. “Casino boats, sin taxes like tobacco, and luxury taxes. and if they won’t vote for those, then we must raise the sales tax.”

Ms. Winkler agrees. “We don’t have structural problems with our retirement systems, we have funding and revenue problems,” she said. “It’s not going to happen overnight, but we have to have lawmakers that make courageous decisions to find new revenue so that we can fund all of the programs necessary for citizens.”

Mrs. Crovo also expressed concern over the healthcare stipulation. “Healthcare during those years before teachers are 65 is a necessity,” she said. “No one can afford [the plans they are suggesting] because they are the cost of another mortgage.”

And it’s not just teachers who are critical.

Matt Alley, a labor activist who has a Facebook page dedicated to issues facing public employees,  stated in a comment that the bill is “more of Bevin’s war on teachers, state employees, retirees, the poor and working families…anyone who isn’t rich.”

The bill is expected to get its first hearing next week.