A Pension is a Promise

Dunbar teachers are concerned for their future in light of Matt Bevin’s proposed pension reform. 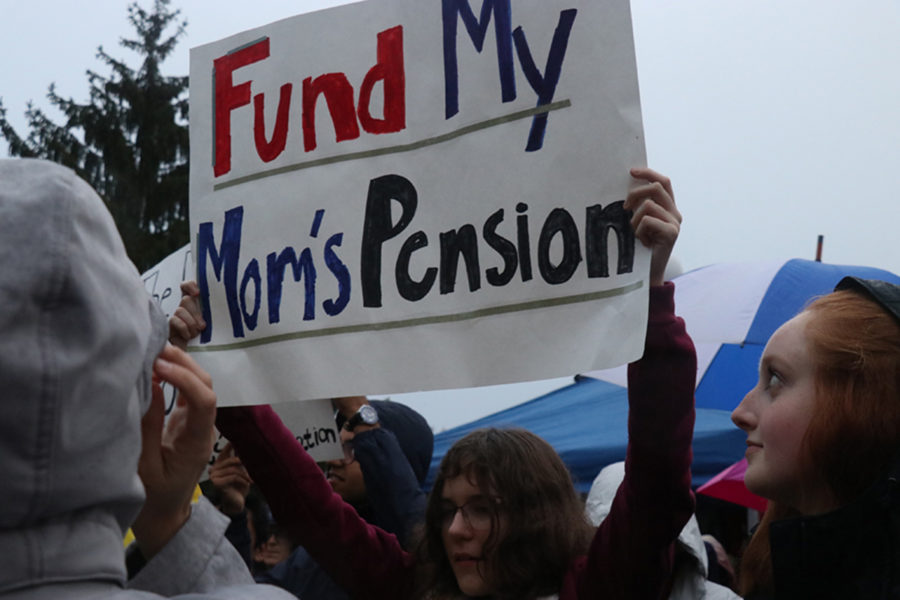 After paying a consulting firm a sum of $556,300, Governor Matt Bevin presented a 505 page bill he dubbed “Keeping a Promise,” to make significant changes to the pension system in order to pay back decades of government debt. Bevin will need to call a special session in order to vote on the bill which has been met with significant backlash.
What Does the Bill Do?

Teachers and many other public workers will be switched from pension to 401(a) plans, depending on their years of service. The primary difference between these plans is that a pension is a guaranteed amount of monthly income that is controlled by the employer whereas contributions to a 401(a) from the employees paycheck are mandatory and set by the employer. Under the 401(a) system, 9% of teachers’ paychecks will go towards retirement funds and 6% will be matched by the state. In addition, 3% of teacher salaries will go toward the TRS medical insurance fund. Essentially, teachers who have already signed onto a secure retirement plan (a pension) are now being forced to pay more money to a plan that is less stable, as 401(a) contributions are invested in the ever-changing stock market.

In addition, a fact that many people overlook is that teachers are also not eligible for social security. Even if they worked in the private sector before teaching, they still cannot draw benefits. They also cannot draw death benefits in the event of their spouse’s passing.

“A Pension is a Promise” quickly became a trending social media hashtag in response to Gov. Bevin’s bill. Every teacher signs an “inviolable contract” at the beginning of their careers to approve their retirement plans. If Gov. Bevin’s bill is passed, these contracts will be broken and replaced with a plan that reduces teacher salaries, places them at the mercy of the stock market, and makes them pay for an immense debt they did not create.

According to the Courier Journal, Kentucky’s pension debt is approximately $33 billion with an additional $6 billion for retiree health plans. It is estimated that “That number will go up to at least $43 billion because of new, more conservative assumptions adopted for Kentucky Retirement Systems plans this year.”

Gov. Bevin said that he will not raise state taxes, but under his plan, districts are asked to pay 2% more each year. For districts that cannot afford this, school or property taxes will have to be raised nonetheless to cover the debt.
What Happened To The Pension Fund?
Ten years ago, Kentucky Government’s Pension was fully funded. Today, it is 42% funded.

According to the Courier Journal, the state has taken over 200 million dollars from the Teacher Retirement System and Health Care Funds, and there has not been an effort to put enough funding back into the system.  Benefits have also been increased in the past two decades in increments known as COLA (cost of living adjustments), despite the fact that the state did not have the funding to cover such increases for current retirees.

Former English teacher and current Dunbar librarian Summer Perry said that “our legislators should have been earmarking some money and setting it aside for the pension. However, they have been choosing to use it on other projects. Well, those other projects maybe need to go on the backburner now and that money needs to be earmarked back where it belongs in the pension system.”
How Do Local Educators Feel About the Plan?

Several Dunbar teachers have spoken out against Gov. Bevin’s plan.  Among them is Tonya Merritt, who began her career as an English teacher and currently serves as administrative dean. Her husband, Brent Merritt, is also a public school educator in Scott County, so her family is facing a total of 6% salary decrease.

“My older son is an eighth grader this year,” she said. “He will be a sophomore in college in 2023 when this dilemma takes place. Our younger son has Down Syndrome so he is going to need financial support for his entire life.”

The Merritt family is an example of a household that will be drastically affected if Gov. Bevin’s bill is passed.

“Here I am facing this impossible situation if [Bevin’s plan] goes through. I have to make the decision that is going to result in the best financial deal for the family,” Mrs. Merritt said. “Whatever I want to do for myself is not going to be able to matter.”

Mr. Doug Wilkinson is a Dunbar social studies teacher. Like Mrs. Merritt, his spouse is also a public school teacher. Mrs. Tara Wilkinson works in the Dunbar English department. He said that the passing of Bevin’s bill would have a significant impact on his household income.

In a letter to Kentucky legislators, Mr. Wilkinson wrote, “It goes without saying that we didn’t enter this profession to get rich, but we have also never complained about our salaries. We knew exactly what we would get paid when we started down this path, and we have created a comfortable life for our family. We never expected to be rewarded for our service, but we did count on the promise from the state that in exchange for 27 or more years of public service, our basic needs would be taken care of. That’s all we ever expected, just what we were promised. Now, however, all that seems to be in question.”

Like many other teachers, Mr. Wilkinson is being forced to question his future in public education as the prospect of Gov. Bevin’s bill looms closer.

“The unpredictability of what may lie ahead makes it critical that we pay attention. We recognize that the current bill further victimizes employees for a problem they did not create. As the picture becomes more clear, we’ll be able to better determine how to use our collective voice to have the greatest impact if and when a special session is held.”

“As educators, you stand for students every day. You help children overcome barriers to learning with unwavering creativity and determination. You give up nights and weekends to ensure that every child has a chance to succeed. Now is the time to be diligent in standing up for yourself as well.”

“Decisions made in Frankfort about pension reform will have very real consequences for every single Fayette County Public Schools employee. Only you can determine how proposed changes will impact your financial stability and future plans.”

“Please get involved. Follow the news. Read proposals for yourself. Share your thoughts with the people you elected to represent you. They deserve to know how their collective actions will impact you individually.”
Is there a proposed solution?
Members of the Kentucky Educators Association (KEA) and the Kentucky Association of School Superintendents (KASS) have proposed a possible solution to the current proposed pension reform. The “Shared Responsibility Plan” retains most retirement benefits for current and retired public servants, and requires incoming employees to make retirement payments similar to those of current teachers. State workers will maintain secure plans as the state makes fixed payments toward pensions.

According to the Caldwell County Retired Teachers Association, “The plan manages risk to the state… which will help us attract and retain great educators and public servants. In addition, under the Shared Responsibility Plan active employees and current retirees would incur no loss of earned benefits.”

“We appreciate the governor for bringing attention to the pension issue because it certainly needs attention and focus.  The biggest issue we’ve had is the fact that there are eight different public pensions and not all of them are in the same level of crisis as the others. This focus from the governor of trying to apply a one-size-fits-all solution to all of those pensions and also this focus on trying to rush to a solution and have it happen in a special session, we feel it’s not appropriate.  We feel that there should be more time taken, we feel that there should be more conversations,” said Dr. Shelton.

According to Dr. Shelton, KASS has met multiple times with legislators regarding the Shared Responsibility Plan, which is currently being drafted as a bill in order to be considered in lieu of Gov. Bevin’s plan.

“We also know that there is a compromise bill that is being generated in the House that has some of the features of what we proposed with the Shared Responsibility Plan so we do believe it is getting more and more traction and should continue to do so as we continue to make sure people understand this issue and don’t jump into it just thinking there is only one solution,” said Dr. Shelton.

Bevin publicly criticized Dr. Shelton on Oct. 27 for requesting that schools be closed during a rumored special session date so that teachers could go to the Capitol to advocate for themselves. “What he’s calling for is for schools to be shut down, for your children to be sent home, so that teachers and superintendents and other people can come here and protest us saving the pension system,” Gov. Bevin said via his Facebook page.

This would not be the first time teachers rallied against Gov. Bevin’s plan. On Nov. 1, hundreds of people gathered outside the Capitol to protest the bill. Among them were several Dunbar teachers and members of student groups like Dunbar Student Council and the PLD Young Democrats.

“We supported our teachers because typically what has happened at rallies like these, whenever teachers go and become activists, people try to bring these teachers down by saying they should be caring about their students instead of going off and protesting,” said Dunbar senior Young Democrats president Akhil Kesaraju.

“We thought that being students there would show that we care about our teachers; it’s not just them running around and trying to get more money.”

We sincerely hope that they don’t continue to villainize the teachers who spend countless hours giving us what we need to succeed. It’s not their fault that this happened, Governor. Stop blaming them.