Black and White and Blue and Gold 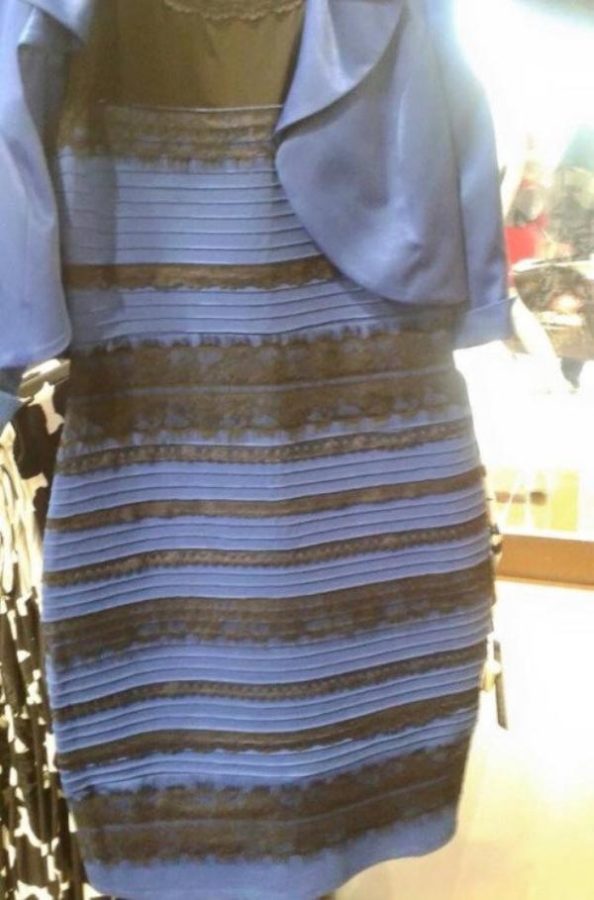 If you tell someone that it’s white and gold, you’ll be beaten until you’re black and blue.

Less than 24 hours ago, that sentence would have had little to no meaning.  What are you talking about?  What’s white and gold?  Why are you threatening me?  Today, however, it seems as though everyone knows about the white and gold vs. blue and black.

It all started with a simple post on Tumblr.

The confusion quickly trickled down to other forms of social media.  Within hours, hashtags such as #thedress, #whiteandgold and #blueandblack were trending nationwide on Twitter.  All over the country social media users were panicking over a simple picture of a dress.  But why?

The controversy stemmed from the fact that some people saw the dress in the colors white and gold, while others saw it in blue and black.  Everyone had their own opinion, and everyone wanted to prove they were right.  Fights broke out, celebrities got involved, and, of course, even the Kardashians were mentioned.

One popular tweet showed a picture of Kylie Jenner rocking black and blue hair.  The words accompanying the picture, however, read “remember when Kylie Jenner dyed her hair white and gold?”

Similar jokes appeared all over the internet.

Teenagers on Twitter weren’t the only ones infatuated with the trend – even celebrities got involved.  Taylor Swift, whose tweet is shown below, clearly sees the dress in black and blue.

I don't understand this odd dress debate and I feel like it's a trick somehow. I'm confused and scared. PS it's OBVIOUSLY BLUE AND BLACK

Katy Perry tweeted that “the dress conversation is seriously going to make me have to take a Xanax.”

The dress conversation is seriously going to make me have to take a Xanax.

University of Kentucky men’s basketball coach John Calipari even chimed in, saying all he sees is blue and white.

You people are all crazy. All I'm seeing is blue and white.

If you are curious about the scientific explanation for this phenomena, click here to read more.

Lamplighter staffed polled students and staff in the library, and found that 38 saw blue and black, while 11 saw white and gold.

So which do you see?  Make sure to take the Lamplighter’s poll found on the front page, and tweet your results @pldlamplighter!