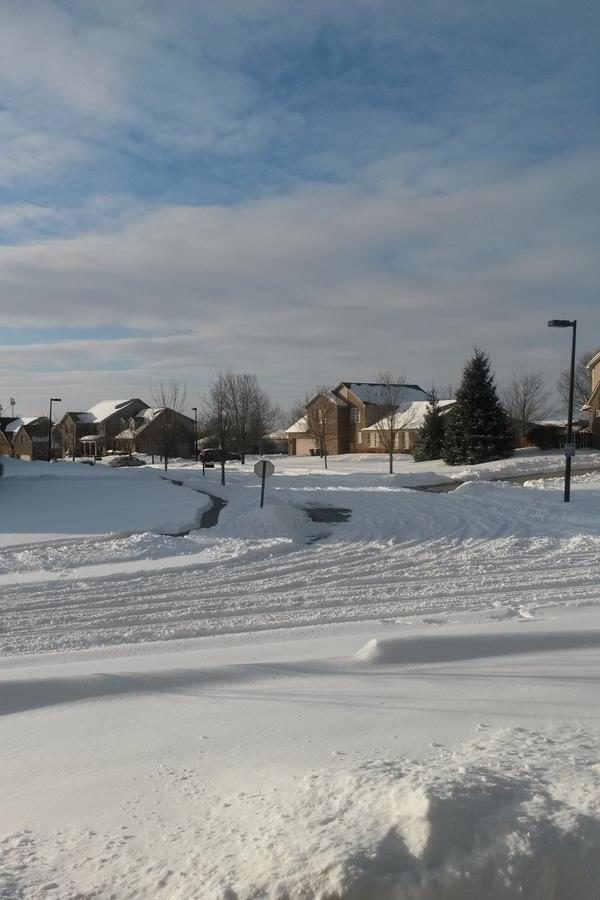 This snowy intersection has stalled many cars, as well as been surmounted by neighbors helping each other out.

The biggest nightmare one can experience on a snowy day is their car getting stuck in the snow. Foot jammed on the gas pedal and mentally urging the car to go, people can feel pretty helpless in this dire situation. If you are lucky enough to live in a neighborhood that’s home to some snowy day superheroes, then you won’t be in this predicament for long.

In Arbor subdivision, two snowy superheroes were helping their neighbors out in this very problem, though they did not consider themselves to be superheroes.

In fact, both men admitted to beginning their morning snow clean ups just on their own driveways.

“We were just trying to get Carrington Court  cleared off, so first of all, my wife can get to work tomorrow,” said Chris Dearinger, one of the neighborhood helpers. “I was just working on my part, and then the neighbors came out, and started helping out with theirs, and then it just became a street-wide thing.”

Bob Ryzowicz, another snowy saint, had a similar story. “My wife was stuck earlier, and so I came out to help her. Then everyone else was getting stuck, and so I just kind of helped everyone else out.”

Mr. Dearinger and Mr. Ryzowicz were thinking about the conditions of tomorrow morning, and how difficult it would be for the entire street to deal with, when they continued their snow clearing work.

“We wanted to try to get a little bit cleaned up before the morning,” Mr. Ryzowicz said. “If the plows don’t come by tomorrow, it’s going to be pretty hard to get up out of this subdivision.”

Neighborly relations are important to both of them, but they also just seem themselves as being good people, and doing what anyone would do.

Mr. Dearinger said, “We started seeing everybody getting stuck, and I mean, you just kind of start feeling bad for people. I mean, what are you going to do, just let them sit there and suffer? I mean there’s no way. It’s just the right thing to do.”

The conviction that these two men have about these ideas is apparent. From Mr. Dearinger and Mr. Ryzowicz, I learned that community involvement actually goes a lot deeper than just racking up points for Beta Club.  Feeling a sense of community and having friendly relations with your neighbors is a wonderful thing, and something to be grateful for.

“That’s what a neighborhood is supposed to be,” said Mr. Dearinger, about his and Mr. Ryzowicz’s helpfulness on this snowy morning. “You see someone in need and you kind of just help them out.”

Though Mr. Dearinger is certain that this sight, of neighbors coming together for a common cause and helping each other out, is common, to many of us, it definitely doesn’t seem that way. This mindset is understandable, especially in a world where the media tends to focus on the negatives, and sensational headlines are the norm because that’s what sells.  In these conditions, good can seem very hard to come by. In fact, it’s even harder to find the good things in life when are brains have been wired to only focus on the negative. It’s actually harder for our brains to shift from a negative focus to a positive one.

Good neighbors like Mr. Dearinger and Mr. Ryzowicz remind us that there is good in this world.

Mr. Dearinger said, “I think if you went around to other neighborhoods you would see a lot of this. It’s not just isolated here. It’s just what people do.”

When asked if they do this every year, Mr. Dearinger gave a resounding “no.”

“I think they said, since ’98, this is the most snow we have had, and I rememebr that one. It was probably about 18 inches. It was pretty bad.”