Lexington is Getting Bigger and Brighter 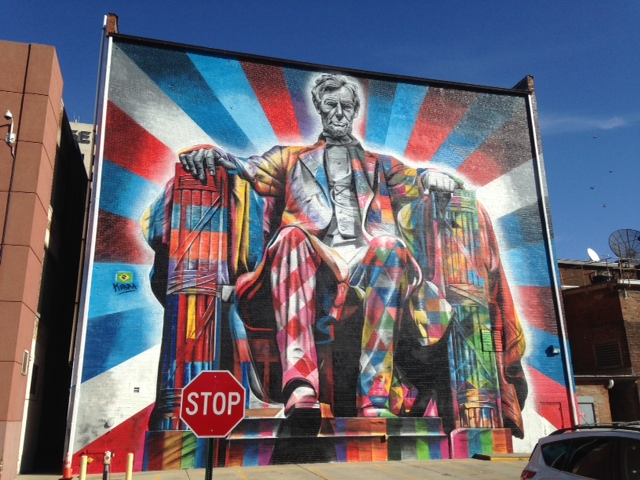 This is a photo of the Lincoln Mural painted by Eduardo Kobra. It is on the back of The Kentucky Theater building, and it can be seen from Vine Street in downtown Lexington.

When other people talk about our city, it is easy for them to be absorbed in stereotypes. It doesn’t help that in 2011 Lexington was ranked as the most sedentary city in America, earning us Stephen Colbert’s “Golden Reacher-Grabber Award.” Not our brightest moment.

However, there are many reasons to be proud of our Bluegrass home.

Recently, Lexington was rated as one of the most educated cities in America according to the American Community Survey, a collection of data by the U.S. Census Bureau. Our city found a place amongst far bigger names: Seattle, Washington D.C. and San Francisco — all with over a million people.

Praise is more frequent for Lexington than criticism. Lexington has received high rankings for its diverse, business-friendly economy and low cost of living. In 2010, Lexington was rated as one of the 17 cleanest cities in the world by Forbes.

Lexington isn’t just home to high rankings. George Clooney was born here in 1961, and actor Ashley Judd went to both Sayre School and the University of Kentucky.

Lexington has also been an important home to history. Most know Mary Todd Lincoln and Henry Clay were born in Lexington, but it was also where the first Beethoven symphony was played in America — Symphony No. 1 was played in Postlethwait’s Tavern, once located along the present-day East Main Street downtown, in 1817. Lexington is also the home of Transylvania University, the first college in the American west. Transylvania was the alma mater of famous Texan Stephen Austin and numerous other politicians.

Lexington’s history is also a history of firsts. In 2012, Lexington played host to the first “Tattoo Project.” People from all around the city allowed themselves to be tattooed with the words of a poem. In 2010, the World Equestrian Games were held for the first time outside of Europe — and Lexington was the host city. While many think that Portland, Oregon, was the first American city to have an urban growth boundary, Lexington has protected its rural lands since 1958 — fifteen years before Portland.

With a rich sense of history, it’s not surprising that Lexington also hosts a rich sense of culture. Around Lexington, murals have been painted by both foreign and local artists. A mural of Lincoln downtown is perhaps the most famous. Painted by Eduardo Kobra, a Brazilian artist, the mural, which depicts the image of Lincoln seen in the Lincoln Memorial in Washington, D.C., is massive — a person standing at the bottom will barely reach Lincoln’s shoe. On Alexandria Drive, another mural can be found on a Marathon gas station. Dedicated by a local artist to a cashier who was shot and killed during a robbery, the mural promotes nonviolence.

One writer fell so strongly in love with this local spirit that she wrote a “Love Letter” to Lexington as part of a series on the Huffington Post. In it, she hailed everything from Lexington’s placid pronunciation of Versailles (vuhr-sales) and Athens (ay-thens) to its fanatical obsession with basketball.

With such a wonderful past and present, and a promising future, it is hard not to love Lexington. However, the truly marvelous side of Lexington is how unique this side of the Horse Capital of the World is — it should be a source of great pride.