Mrs. Turner makes a lasting impression on every student she meets. 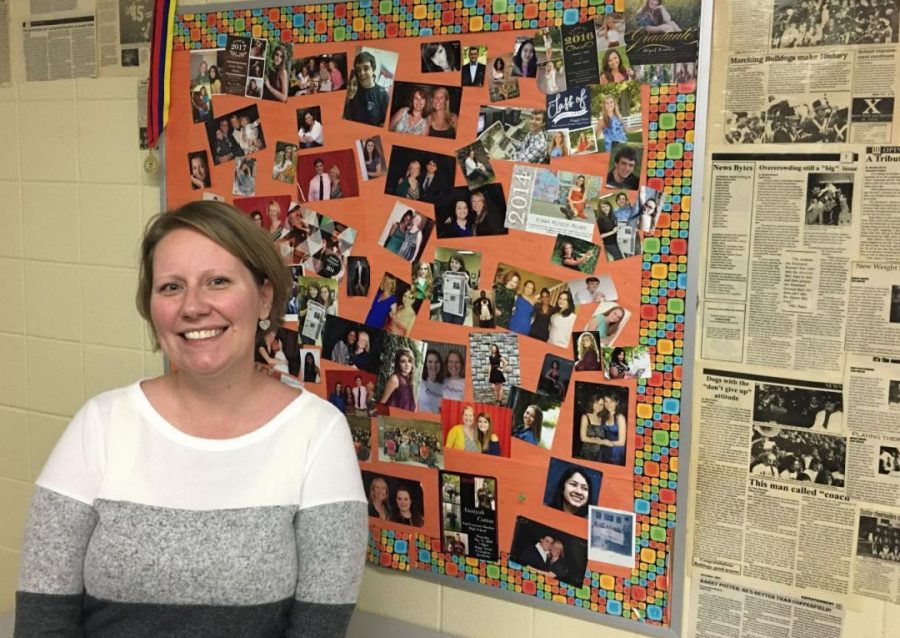 Mrs. Turner has a bulletin board of former students who now work as professional journalists.

Dunbar students know that Lamplighter kids put so much work into their products, but what many don’t know is the face behind the program: Mrs. Wendy Turner.

Mrs. Turner has been teaching for 18 years. However, before she became a teacher, she worked at the Lexington Herald-Leader as a Bluegrass Communities reporter and this is what she said led her to discover her love for education.

“I was writing so many stories about schools and teachers doing amazing things that it began to occur to me that maybe I’d like to combine my passion for journalism with the profession I was feeling a calling to do,” Mrs. Turner said.

Her favorite part of her job as a teacher is advising the Lamplighter program of which she has been leading since 2006. Over the years, she has helped countless students produce award-winning journalism such as winning first place honors at the National  Scholastic Press Association in 2015, 2016, 2017 and 2018 as well as Gold Medal distinctions from the Columbia School of Journalism (CSPA). In 2017-18, she led her staff to be recognized by the Fayette County Public Schools for numerous outside recognitions such as winning KY Best High School News Web site.

“I have a strong commitment to my students, and to the media program that I have grown since 2006. This year, I was able to expand my program to better help my students make connections to careers in Media Arts,” she said. “I’m really proud of that.”

Of the students that graduate with Lamplighter experience, she said many go on to study journalism in college.

“I think the passion for a career in media arts is kindled with early experience in the field, especially through our media internship program that partners students with professionals,” she said.

Mrs. Turner was selected as 2014 Kentucky Journalism Teacher of the Year, and she currently serves as the vice president of the Kentucky Journalism Teachers Association. She also co-authored “Creating Conditions for Literate Engagement: Teaching, Learning and Acting in the World” published in the Journal of Adolescent and Adult Literacy with Mrs. Amber Faris and Dr. Leslie Burns. In this article, she explained the importance of student voice and student journalism program.

A student featured in the article, 2019 graduate Abigail Wheatley, learned this firsthand.

After being rejected from a roundtable discussion on education, she and her co-Editor-in-Chief Olivia Doyle were picked up by the Washington Post in their editorial about their experience. Afterward, they were also featured in Education Weekly.

Mrs. Turner is also the sponsor of Dunbar’s Student Voice Team and helped students hold a rally about gun violence in Lexington.

The student voice team is important to her, she said, because students deserve to be heard as stakeholders in education.

In terms of her own education and upbringing, she said that she grew up an “army brat” and that she lived on army bases in Germany, Kentucky and North Carolina.

She said that one of her most interesting memories was during high school at Fort Campbell, Kentucky. During Operation Desert Storm she said that “almost everyone’s dad on the army base was sent to Iraq.”

“Because of this,” she said, “our school canceled all final exams because everyone was so upset and worried about their deployed parents.”

The life Mrs. Turner has led has built her into the person and teacher she has become.

Every student who has her as a teacher learns not only how to become a great journalist, but also how to be a great person.

“I try to integrate life lessons into everything I teach because I want my students to be ready for the real world.”