The more accepted use of 'they' as a singular gender-neutral pronoun illustrates society's strides toward equality. 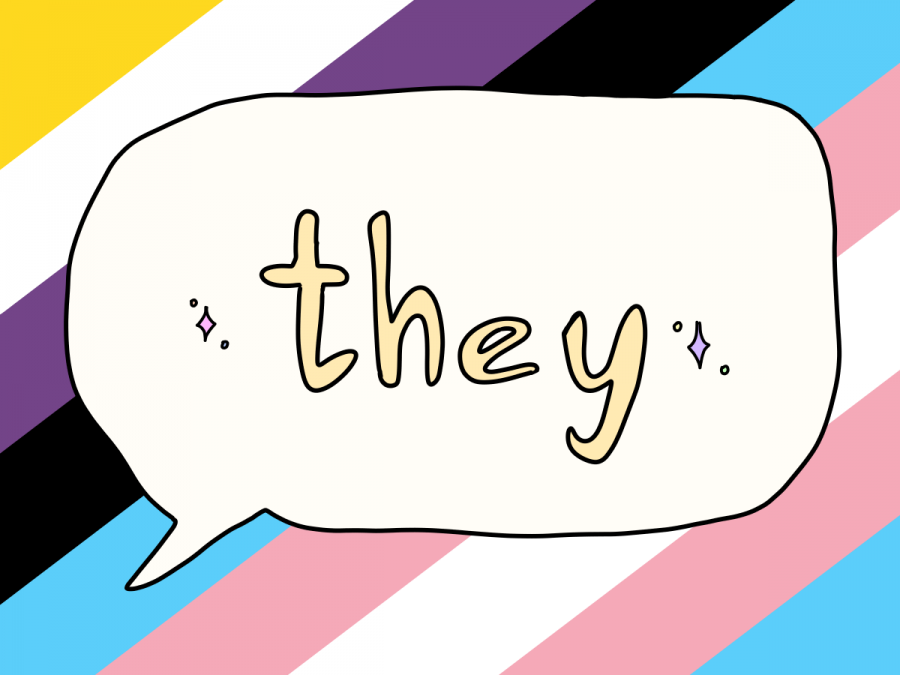 For such a small word, the pronoun they has been stirring up a lot of trouble.

High school is a time when many students are discovering who they are, but for some non-binary and transgender students, it can difficult to ask for their preferred pronouns.

Non-binary, agender, bigender, and transgender are just a few nonconforming terms that describe those who do not identify with their assigned sex. Students who fit these descriptions sometimes find that their requests for others to use their preferred pronouns aren’t always met.

But many teachers are trying to incorporate inclusivity into their classrooms.

“It is always my intention to make people feel comfortable and valued in my classroom,” English teacher Mr. Trevor Tremaine said. “Everyone has the right to have their identity affirmed.”

According to transgender activist, Drew Adams, something as simple as using the correct pronouns can make a big difference in a student’s life. “For so little action on your part, you can really change a student’s entire school year,” he said.

“We have been conditioned since birth to see black and white, pink and blue, male and female, but in reality, some people don’t feel like they identify with their assigned birth gender. When people purposefully misgender someone, it shows that they don’t see them as who they truly are at their essence.”

Although there are clear strides being made toward inclusive language, there is still a stigma.

“Language purists have invested a lot into the idea of ‘one true English’ that’s mostly fictional, but conveniently the fictional language happens to be exactly the version that is spoken by well-off White Americans,” Linguist Dr. Kirby Conrod (they/them/their) said. According to their profile, Dr. Conrod’s dissertation Pronouns Raising and Emerging explores the “sociosyntax” of pronouns and gender in English.

Grammar purists who are rigid in the English language’s ability to evolve are part of the problem. The use of they as a singular pronoun is only wrong if the rules of standard English are unbreakable. A language dies if it does not evolve, and many argue that they has become a necessary evolution.

“When language and culture shift together, it’s usually the case that language conveniently has a mechanism that’s filling a need that people already had,” Dr. Conrod said. “People have talked about needing a gender-neutral term of reference for decades–the language was eventually going to shift to fill that need one way or another.”

Society has become so conditioned to the pre-determined he/she, that the use of they to refer to someone can be a shock. Pronouns are political, and history shows how culture and politics can drive language change.

“We may think we are left or right, but the truth is most of us are more in the middle when it comes to politics and gender,” Mrs. Faris said. “Why do we have to choose one or the other? Gender shouldn’t be an A or B category.”

And those who identify as non-conforming are acutely aware of the bias.

“When language is not inclusive, people who are not included notice,” Dr. Conrod said. “When I, a non-binary adult with a fancy degree, am looking at job ads I sure notice when the job ad says he or even he/she because that tells me–even if the company doesn’t really think about it–they don’t want to hire someone like me.”

According to Dr. Conrod, this is an issue of unconscious prejudice because people don’t know that they have internalized this really unbalanced world-view.

“In their mind, it’s just normal.”

Because it’s unconscious, some people truly do not understand the negative impact that misgendering and purposeful exclusion causes. Even though it’s not intentionally dismissive, some teachers find it difficult to use non-gendered pronouns because they slip or forget–not because they’re ignorant.

“We all screw up pronouns at times, and when we do this to students who go by they, we should always apologize and use the correct one, and try to do better in the future,” Mrs. Faris said.

According to a study conducted by The American Journal of Preventative Medicine, gender non-conforming students, genderqueer, or transgender students are more than four times as likely as their cisgender peers to experience one or more mental health issues.

“To misgender someone can make them feel like they are not seen or understood, and can lead to feelings of discomfort and dysphoria,” Mrs. Faris said. “This is why GSA is really pushing for more training for teachers on these types of issues.”

Most people would agree that students are supposed to feel welcome, safe, and included inside school doors, and schools should have the proper resources for all students.

“Many think that [teachers not using pronouns] is more of a lack of training and embarrassment–teachers screw it up, and instead of owning up and apologizing, they just continue to use the wrong pronoun,” Mrs. Faris said.

That is why she is advocating for better training. She believes that students need to have trusted allies in their teachers.

GLSEN (Gay Lesbian and Straight Education Network), founded by a group of teachers in 1990, has a curriculum that teachers can incorporate into their classrooms. On their web site it is described as an “LGBTQ-inclusive curriculum that benefits all students by promoting acceptance and respect, and teaching them more about the diverse people and families in the world.”

Activist groups like GLSEN are not the only ones working toward more social acceptance of the LGBTQ community. Now, even time-honored publications are getting involved.

This past year, Merriam-Webster Dictionary named they as Word of the Year 2019. But this is not the first time they has been recognized for its importance in the English language.

“Singular they keeps getting named word of the year by various organizations who document and describe the state of English because it’s on the up and up,” Dr. Conrod said.

The difference this time is that it comes from a familiar source that people have been using for years.

“The special significance in the Merriam-Webster word of the year over, say, the American Dialect Society, is because the dictionary puts out a resource that people use and trust as authoritative,” Dr. Conrod said. “It might mean that more people will accept singular they as here to stay, rather than a brief trend.”

Not only is the Merriam-Webster Dictionary acknowledging the ever-changing English language and the word they, but The Associated Press Stylebook also added they as a singular, gender-neutral pronoun in 2017 whereas in 2016 they advised just working around the use of they.

“[AP’s style guidelines] are trying to balance between sounding highfalutin’ but also keeping up with the language that people actually speak,” Dr. Conrod said. “Enough people use singular they that it’s more awkward to avoid it than to use it, and the change reflects that.”

Gender is no longer just male and female, and language has to match that change.

“I’m very interested to see how pronouns in English evolve to fit into this new model where gender is more of an add-on feature than something that’s core to the language,” Dr. Conrod said.

They and the use of non-gendered terms are not going anywhere. With more groups in support of the LGBTQ community, gender nonconforming pronouns are more common than ever.

“The validation of non-binary and transgender people is a settled case in biology and the social sciences, but even if you don’t want to accept that, what harm does it do to just respect others’ wishes?” Mr. Tremaine said.

“The ethics of reciprocity and the Golden Rule is a good principle to apply here.”