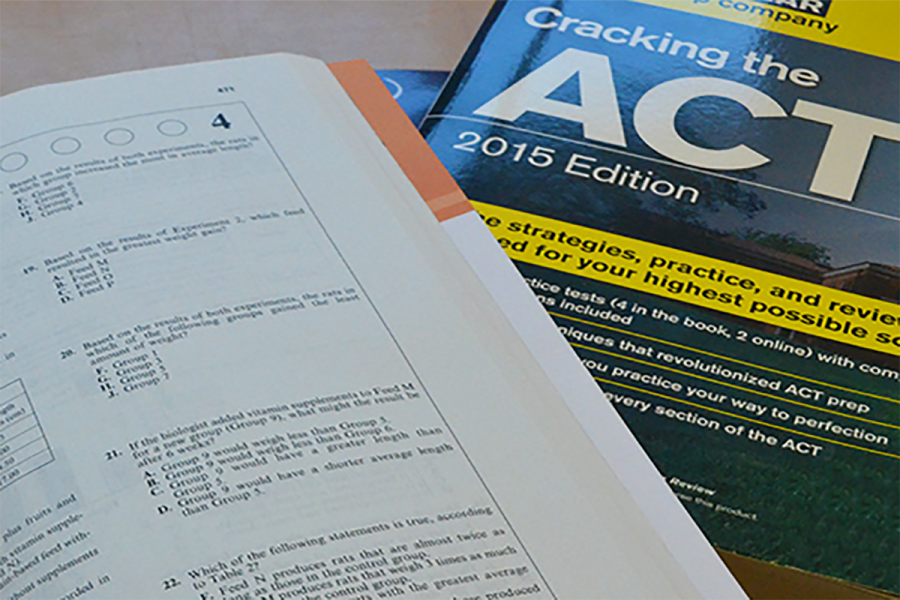 ACT practice booklets are commonly used by students in preparation for the exam.

Starting in the year of 2020, students will be allowed to retake certain sections of the ACT in order to improve their overall “superscore.” A superscored ACT takes a student’s highest score of each subject and averages it creating a “best overall score.” Allowing students to retest on specific portions of the test will allow students to easily improve their score.

The ACT is a three-hour standardized test used by most colleges and universities as a factor of determination in who is accepted into their institution. The purpose of the ACT is to measure how prepared a student is for college. Most high schoolers take the test during the spring semester of their junior year or the fall semester of their senior year.

The test is divided up into four sections: English, reading, math, and science. Each component has a specific number of questions, a scheduled amount of time allotted and is scored on a 1 to 36 point scale. There is also an optional writing test. The writing portion is not required because only certain schools take it into consideration during the admission process.

This decision could be caused by the graduating class of 2019’s level of “college readiness.” Students tested at a record low in the math and English portions of the ACT. 59% of the test scores indicated the level of “readiness” deemed appropriate for the English portion. In math, 39% scored the ideal level. The new retaking rule could boost this percentage for many students.

Students at Dunbar are voicing different opinions on ACT’s new decision. Chris Williams, a senior, is in favor of the new rule. He believes the new alterations to the test will prove quite beneficial.

“I think it is a fantastic idea that will dramatically increase the potential for students to get the score that they want,” Williams said.

Williams, who has attained his desired score on the ACT, also wishes the retaking of certain standards was a possibility during his time of testing.

“I think that a lot of students who are graduating the year before this is going to be put into effect express some negative emotions towards it because they wanted to have that when they were taking the test, but I think it is a step in the right direction,” Williams said.

In contrast to Williams’ view, junior Emily O’Nan feels this new rule has the potential to negatively impact the value of the exam in the future.

“The value of the test, overall, will go down due to the fact that students will be able to retake whichever section they want. The retaking will lead to a higher superscore, and a student achieving a 36 on the ACT will not be as valuable,” O’Nan said.

Due to the length of the ACT, if a student wishes to improve their score on one standard of the exam, it may seem useless and frustrating to sit through the entire exam for one section. The allowance on retesting of specific portions would end this issue. It would also eliminate the possibility of fatigue from affecting lower scores on the later subjects of the test.

Overall, while the retaking of certain subjects of the ACT tests could improve a student’s overall score, it may diminish the value of the test as a whole.