Should Students Use Wikipedia?

A look into how much of Wikipedia’s information is inaccurate, and whether or not students should use it as a resource for projects and papers. 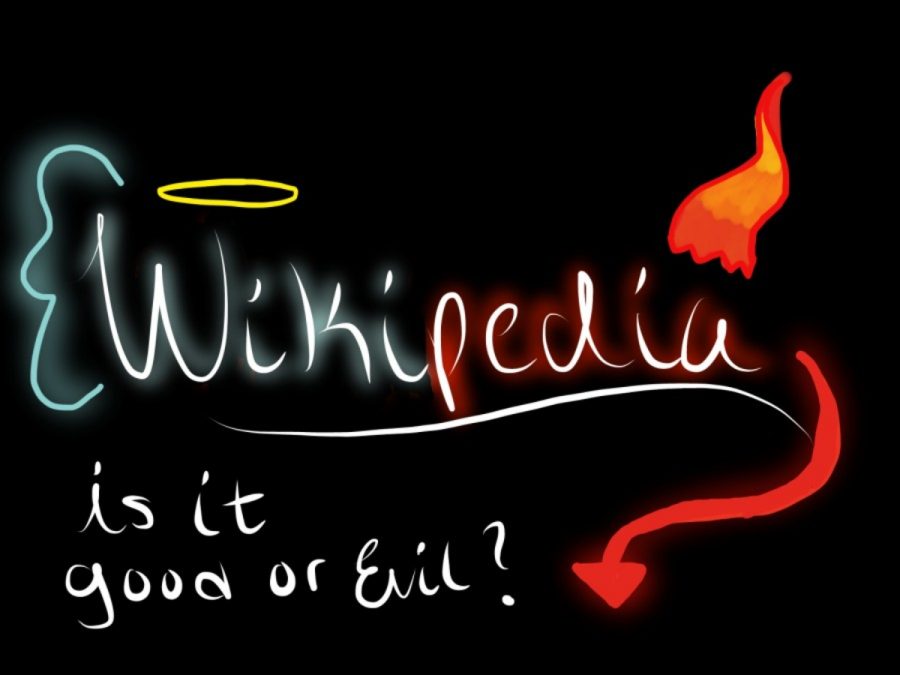 Angel vs. Devil Theme. Wikipedia: Is it good or evil?

Wikipedia is considered a free encyclopedia site, containing articles on many different topics and interests for people to access.

Many students enjoy using Wikipedia to gather large amounts of helpful information. According to Live Science, Wikipedia has over 3,000,000 English language entries, simple to use and easy to access, stealing the preference of students of all ages.

“Wikipedia is really good for getting information about general aspects of various topics. I don’t trust it for details, but when doing research, the sources cited at the bottom can be a good place to start,” sophomore Zoë Jenkins said.

However, teachers constantly emphasize how crucial it is for students to not use Wikipedia and instead find trustworthy sources online. Arguments like this are not new and have been debated for several years now.

“If you need a deep dive to support an argument or an analysis or your own research, you need to go to the primary sources. Wikipedia is not that,” English teacher Trevor Tremaine said.

Due to Wikipedia’s ability to let users edit article information, many find this digital encyclopedia to be inaccurate and untrustworthy. The longest Wikipedia hoax was the creation of an article claiming the existence of a fake word,  “Vivarem,” which, according to Wikipedia hoax page, lasted 12 years and nine months

It’s only natural to expect this, considering that people can edit whatever and however much they’d like. Regardless of this fact, several studies claim that

Wikipedia is actually a reliable and easy-to-go-to source, with plenty of information and most accurate information.

According to a study conducted by a group of German researchers who systematically analyzed pharmaceutical drug information on Wikipedia.

While the same study also shows that the completeness of these articles is anywhere ranging from sixty-eight percent to ninety-one percent, the data this research provides show that these articles, or at least the ones about drugs, are close to being completely accurate.

If this is the case, then should students be able to use Wikipedia for all their research and papers?

“Its an aggregation of knowledge of some professionals and some quacks. So you need to go into their sources, the footnotes and the citations of a Wikipedia article, and go to the real sources the peer reviewed academic sources,” Mr. Tremaine said.

“Without this academic rigor and additional research that has been proofread and further researched by the students themselves, arguments can lose ethos,” he said.

Wikipedia continues to expand and grow to this day. While students may not directly use it for school papers, many teens still use it for outside information many different topics, ranging from pop culture to how to care for their pets.