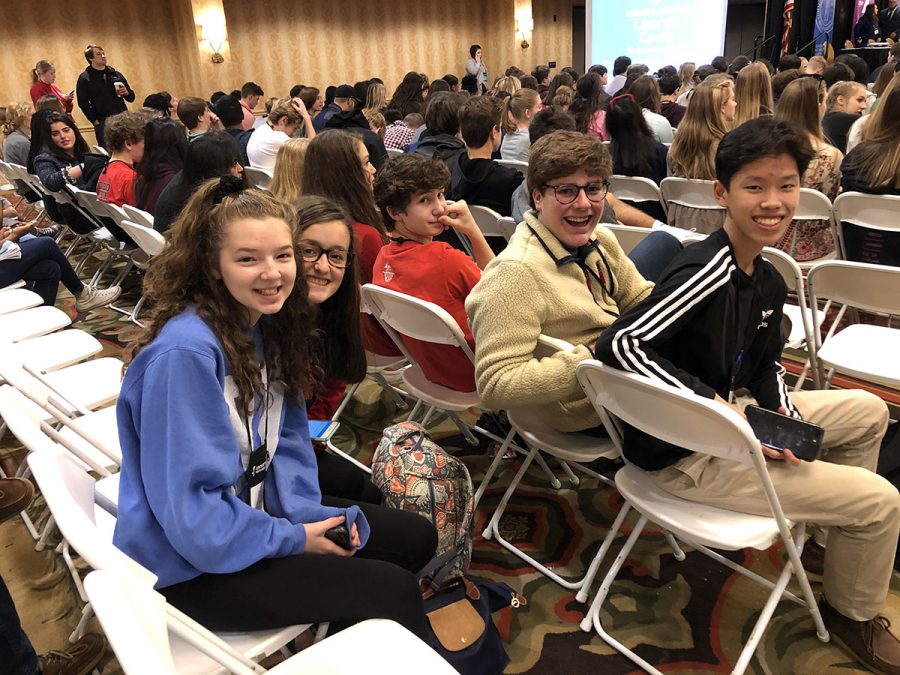 Right before Thanksgiving break, a group of students from Dunbar went to a YMCA sponsored event called The Kentucky Youth Assembly (or KYA).

This assembly creates a mock government for the students. KYA has such a large number of students attend the assembly, that the Y staff splits the group in half by grade. Freshman and sophomores are put in the Bluegrass delegation, juniors and seniors are put in the Commonwealth delegation.

The only way that a sophomore could be in Commonwealth is if they have attended every KYA assembly since middle school.

To make the assembly as similar to real life government as possible, the staff also splits Bluegrass and Commonwealth into the House and Senate. To add the full effect, fewer students are in the Senate than the House to show state representation.

Once in the smaller groups bills are presented. Some bills presented were, requiring everyone to wear reflective gear from dusk to dawn, extra money for teacher supplies, termination of parental rights after no contact with child after 5 years, decreasing the monthly period with a driving permit from six to three months, required heart testing for all athletes prior to sports season, etc.

The bills are presented again and opened for non-debatable technical questions (NDTQ) and pro-con debate. To be called on delegates must raise their placard with their name on it and be called to the front by the speaker. Each delegate has one minute to ask their NDTQ or present their speech in opposition or favor. If the delegate doesn’t want to use the full extent of time then they can yield their time, splitting it with another delegate of their choice.

After questioning and debate the bill is then put to a vote.

Some bills were defeated such as wearing reflective gear from dawn to dusk when outside, teachers having extra money for supplies. Other bills were passed such as termination of parental rights after 5 years with no contact, decreasing the driving permit time from 6 to 3 months and requirement of all athletes to have their heart tested prior to the sports season.

If the bill is passed in the first room it is then moved onto the opposite room. If passed by both it is presented to the Governor or Lieutenant Governor to be vetoed or signed into law.

To add some extra fun to the weekend students are required to attend mandatory fun the second night. Mandatory fun has different rooms like karaoke, dance, gaga ball, and food. The majority of students attend the dance. Mandatory fun lasts for a couple of hours and during that time students must vote for the presiding officers.

After the mandatory fun, current presiding officers give their closing statements. These statements can be very powerful displaying their personal struggles in society and how they overcame them.

This year at KYA Dunbar had the governor, Kevin Jing. Kevin ruled over the entire assembly signing bills into law and leading students. Each year the presiding officers are picked through an election by the students. Students vote twice during the two days, once throughout the dance and again the next morning.

The final positions were announced at the end of the closing ceremony. Dunbar was very excited for Nasim who won the position, Speaker of the House. A student from St. Xavier High School won the position of governor.

After a good weekend at KYA, students learned more about how our government works and how to make a difference in society. Officers asked students to leave thinking about how they want to change their community for the better.