I Refuse to Let Cancer Define Me 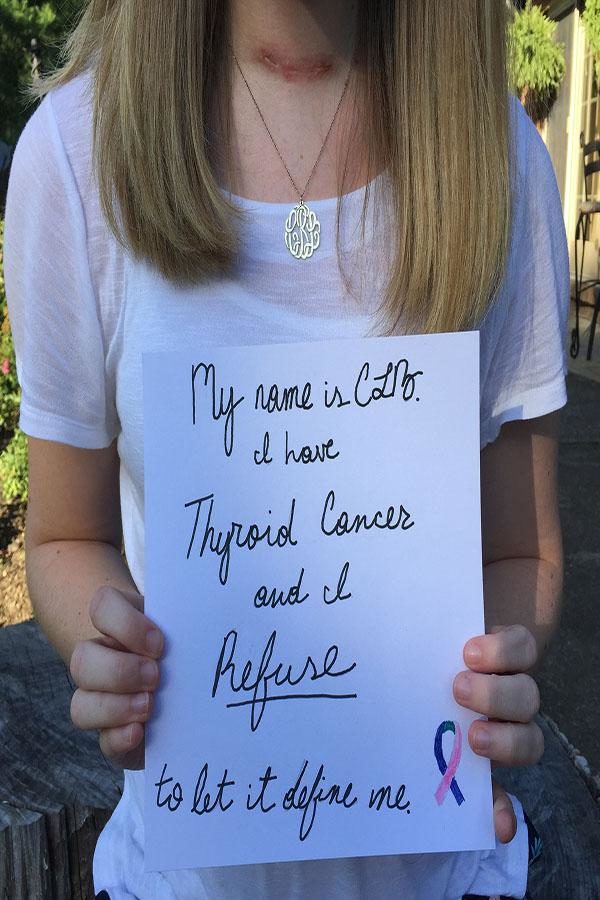 On July 28, 2015, I sat in a doctor’s office at Central Baptist Hospital and was told that my recent thyroid removal had come back with diffuse sclerosing papillary carcinoma, an extremely treatable but extremely aggressive form of thyroid cancer. My entire world was rocked; just when I thought my battle was over, I was facing an entirely new beast. Today I celebrate six months since my diagnosis, and six months of growth as a person.

In March of 2015, after noticing an increased heart rate, tremors in my hands and what I thought was just an extremely enlarged thyroid, I was diagnosed with Graves’ disease. While it came with some struggles, I pushed through the multiple doctor visits and an extensive surgery on July 22 to remove my entire thyroid. Leaving the surgery, I cried tears of joy thinking my battle was finally over.

I came back six days after the surgery to get my stiches removed, and was instead hit with a billion medical terms and a big scary c-word that I didn’t know how to deal with. What we had thought was just an enlarged thyroid was in fact a four-inch tumor that had been infiltrating my trachea. We would need to treat any remnant cancer as soon as we could, and I would be monitored for the rest of my life.

The thing about cancer is you can skirt all around it and list symptoms and treatment types and medical terminology, but it’s that word that really gets to people. Doctors often do this with patients and families to ease the blow, but nothing can pull from that one little word. When it left the doctor’s mouth, I completely shut down. I heard nothing else he said. What does this mean for performing? Will I keep my hair? How do I tell my friends? Will this affect starting a family one day? So many questions filled my head that I could barely see between the tears that burned my eyes.

All these questions were promptly answered for me, but it didn’t cloud this scary diagnosis I faced. For almost a week I didn’t leave my house; I holed up in my bed and watched seven seasons of RuPaul’s Drag Race with the stuffed bunny my nurse had given me in pre-op. I was then faced with a problem of how to tell my friends and blog audience. My closest friends had been informed as soon as I left the hospital room, but there were still so many people to tell. I decided to break the news the only way I knew how: an Instagram and a blog post. The immediate outpour of love from friends and family that followed was overwhelming.

Coming back to school was another challenge. Some people cried upon seeing me, some people went to my close friends for information on how I “really was,” some people talked behind my back and said truly horrible things like that I was “milking” my diagnosis and some people simply didn’t know how to react. My teachers had mixed reactions: some completely understood how difficult finishing schoolwork was going to be, while others expected no change in my abilities. As if junior year wasn’t going to be hard enough, I would be missing school for appointments, surgeries and a weeklong treatment.

Thyroid cancer is an endocrine cancer, so instead of chemotherapy and other kinds of treatment, I would undergo radioactive iodine therapy. This would involve starving my body of iodine for two weeks (not as easy as it sounds) and going off of all my thyroid medications, therefore making me sluggish and unable to focus. Those two weeks were some of my hardest days, with schoolwork piling up and dance becoming out of the question. As bad as it was, I had no idea what was in store for me in the near future.

At the end of the two weeks, I consumed a pill of radioactive iodine in order to make me radioactive and hopefully kill all of the cancer cells. The moment I took that pill, I immediately felt awful. I couldn’t eat, I could barely sleep and I threw up multiple times. I put on a façade, telling friends and family I was fine, knowing I was lying. Somehow, I powered through, encouraged by visits from friends and my then-boyfriend. The months following treatment were a roller coaster of amazing times, such as meeting Kaylee Hartung and attending Sadie Hawkins. Coexisting with this high points, however, were the lows: seemingly drowning in schoolwork and experiencing emotional breakdowns far too often. The end of the semester was an extremely needed break, and I’m pretty sure I slept the entire time.

2016 is here, and I’m glad to put last year behind me. But at the same time, 2015 made me who I am. The night of my diagnosis, my dad shared a quote with me that says “we don’t know how strong we are until being strong is the only choice we have.” If this crazy journey has taught me anything, it’s how strong I really am, and how to be strong when I really have to be. I used to be afraid of needles and feared any surgeries. Today, I’m spending my six month anniversary in a hospital room after getting all the lymph nodes in my neck removed with an IV in my arm. I’ve learned a whole lot about myself these last six months, and for that I am extremely thankful.