What it really feels like when your teacher is your mother 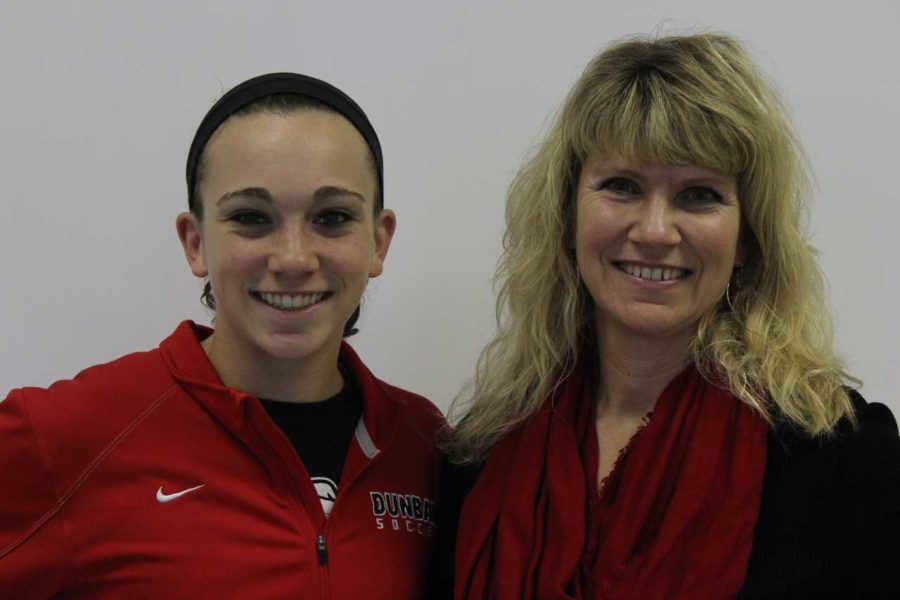 Senior Alyssa Montgomery appreciates the perks of having mom at school.

Have you ever accidentally called your teacher Mom? Don’t worry, so have these students.

Many faculty members’ at Dunbar have their own children as students. While to some this could seem like a terrible punishment, these students say it’s not so bad after all.

Calculus teacher Mrs. Melanie Brooks has learned from previous experience how easily the student-parent-teacher relationship is set apart from the rest of the class.

She said that her oldest son once fell asleep during a lecture. “With any other kid I would’ve nudged them awake, but since he was my kid I went by him and slapped him on the back of the head,” Mrs. Brooks said with a laugh.

Most students already knew that he was her son, but one student didn’t. With a shocked expression on her face the students whispered, “She just slapped him on the head really hard!”  and then other students waved off her concern. “Don’t worry. He’s her son.”

Apart from the possibility of getting a smack on the noggin, some students say the biggest problem that teachers have is making sure they don’t show favoritism.

“When it comes to picking someone to get bonus points, he might not get picked,” Mrs. Brooks said, referring to her youngest son Skyler.

Some teachers even feel like they have to be harder on their own kids than other students to prove they aren’t just letting them off easy.

“I think [Jared and I] would both agree that sometimes I’m way harder on him than other students in the class,” said physics teacher Karen Young. She has had Jared in class for two years.

When Jared first came into school knowing he would have his mother as a teacher, he wanted to establish himself first without being known as a “teacher’s kid.” This effort lasted for less than a day when everyone somehow figured out they were related.

“The biggest thing we were worried about was that I would say something to embarrass him during class,” said Mrs. Young. So far, he says that she hasn’t. Not yet.

Other children/students feel differently about the arrangement.

“It’s nice to have my mom here because I can always come to her to help me out with anything,” said senior Mary Martin about her mother Mrs. Donna H. Martin.

Both Mary and Skyler said the benefit is having the personal attention of her mom when it comes to homework help.

“It’s kind of cool because she can help me with Calculus and Comp Sci,” said Skyler Brooks. “Also, if there’s ever an emergency, she’s right there for me.”

Some of the students express regret for missing out on these benefits earlier on.

“I didn’t realize it until recently, but it’s pretty cool getting to see my mom whenever I want,” said senior Alyssa Montgomery. “Plus, it’s easy to get a parent signature if I forget,” she said with a laugh.