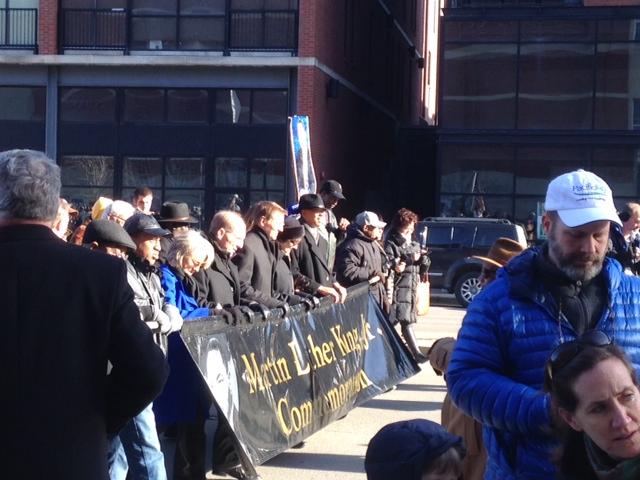 Mayor Jim Gray and others held a banner at the beginning of the march.

Since Martin Luther King, Jr. Day in 2000, the University of Kentucky has sponsored an annual “Martin Luther King Walk and Celebration,” a day-long event on Jan. 20 that celebrates the life and legacy of one of the Civil Rights Movement’s most prominent heroes. This year, I decided to attend the walk for the Lamplighter.

I arrived around 9:45 in the morning. Wind made temperatures that were otherwise tolerable bone-numbingly cold. However, what I thought might be a small gathering was a lively group of individuals huddled in packs just outside of Heritage Hall, carrying signs. Some wisely waited inside Lexington Center for the event to start.

Fortunately for the participants, It didn’t take long for the march to begin. As scheduled, at 10 a.m., the shoulder-to-shoulder march began with the sing-song repetition of Martin Luther King, Jr.’s own chants, “We Shall Overcome” and “We’ll walk hand in hand,” from his March on Washington. The human choir was joined by a police siren, reminding traffic of the marcher’s presence.

More of a mock protest than a remembrance parade, the sounds of the march were uniform, filled with chanting, singing and clapping.

Pairs or groups of three sang hymns in tune with those around them over loudspeakers. One man carried a trumpet and played “The Star-Spangled Banner” and the “Battle Hymn of the Republic” as an American flag waved in front of him. From the side, the showing was impressive.

The fifteen minutes it took the marchers to pass was filled with diversity. The Lexington-Fayette Branch of the NAACP and the Central Kentucky Council for Peace and Justice both joined. However, schools and church organizations also joined. Sayre School, Transylvania University and the Unitarian Universalist Church of Lexington were all in attendance.

Churches and civil rights organizations also joined local schools earlier in the day for the annual ‘Unity Breakfast,’ hosted by a fraternity at the University of Kentucky. Dunbar senior Asha Jones participated along with other Fayette County students. In a speech before the attendees present, Jones reflected upon humanitarianism.

Although I had decided I needed better winter gloves by the end of the walk, it was truly rewarding to not only see so many dedicated individuals remembering an important piece of American history, but to see them also translate it into the present.

On Martin Luther King, Jr. Day, we tend to think of history. We reflect upon what has been done by individuals like Martin Luther King, Jr. However, the march reminded me very clearly that the movement for civil rights, peace and justice is far from over. It’s a never-ending commitment, and Lexington’s part on one day of the year — hosting the second-largest unity breakfast in the nation, an active march, and a vibrant celebration — are remembering more than history.