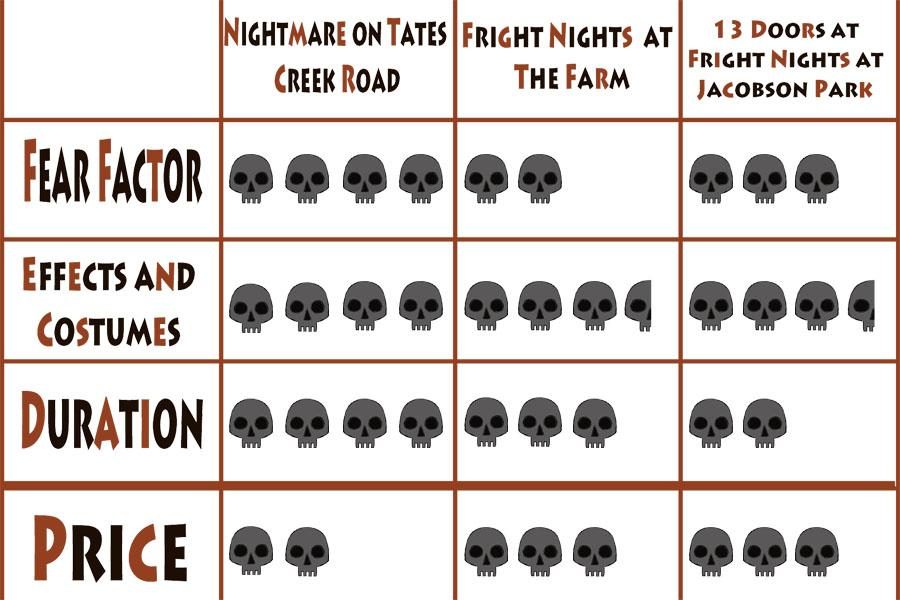 I tried all three of the attractions at Fright Nights, but 13 Doors was by far the scariest trail. There was something unexpected around every corner, causing me to scream like a little kid. At one point my unsuspecting friends and I were even locked into a room with someone holding a giant ax and wearing what looked like a scuba suit. The house was dark and creaky (as a haunted house should be) which contributed to the eerie setting. The actors were well disguised, wearing costumes that looked frightfully realistic. Ghouls and goblins were constantly popping out. My favorite part was the rush I got from being scared when things jumped out at me. Even though the lines moved pretty quickly, they were long and I got tired of waiting. The tickets were expensive so I wouldn’t recommend going if there is a chance that you will back out at the last second. Not every part scared me, but the parts that did were worth the money.

If you enjoy going to haunted houses, this is the place to go. The whole house is set up to look like a deserted hospital. I thought it looked incredible. I felt like I was in an actual horror movie. The costumes were unbelievably realistic. The smoke and sound effects add to the gruesome setting of the hospital. The strobe lights caused mass confusion but added to the scare effect because I didn’t know what was going on. When my friends and I first walked in, they had us sit in a room that looked like a movie theatre. Just a word of advice—if you get scared easily do NOT sit in the front row or you may pee yourself. Also, showing fear will encourage the actors to pick on you. This is a great haunted house to go to if you love to scream.

Fright Nights at the Farm

When I first arrived, I heard the sound of a chainsaw and people screaming. I had no idea what to expect so I was really scared. Fright Nights at the Farm is actually two different hayrides. My friends and I went on the Haunted Hayride and had to sit on the very back row. The hayride takes you through a cornfield filled with all kinds of creatures. The costumes were some of the best I had ever seen. They were horrifically realistic. But over all I was disappointed. It wasn’t very scary. Everyone spent the majority of the time laughing at the monsters. They had a great sense of humor. The finale was the only part of the hayride that actually made me scream. Unless you’re afraid of clowns and pigs I wouldn’t recommend spending your money because I was not impressed.