The Process of Impeachment

The Speaker of the House has decided to fully exercise her constitutional powers to pursue an impeachment inquiry. 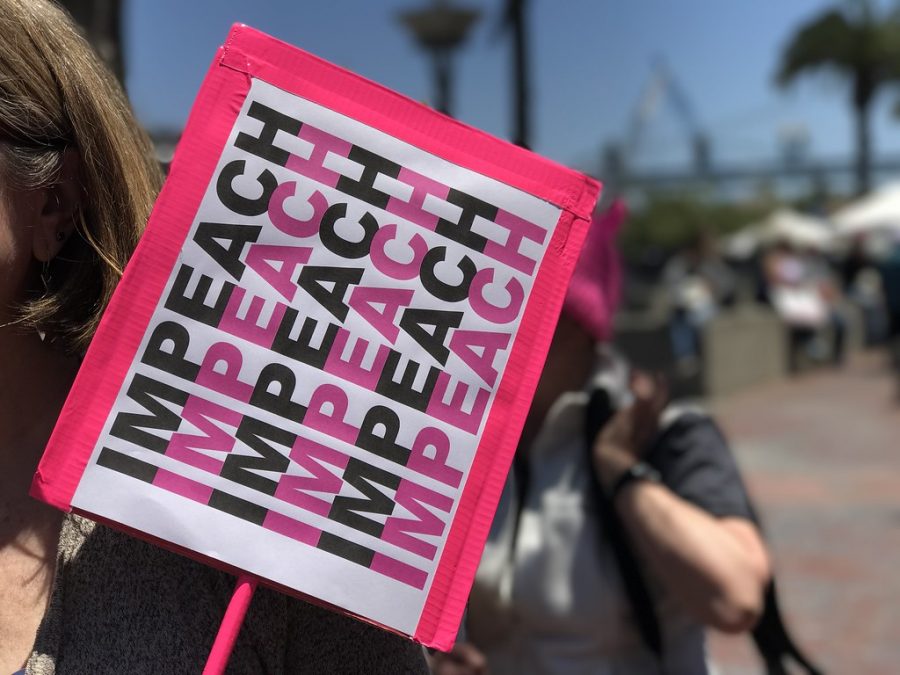 This photo from early 2017 shows that the call for Impeachment began from the beginning of Trump's presidency.

Since the beginning of the Trump administration, there has been scandal after scandal, but the most recent may be the most devastating.

On Sept. 13, 2019, House Intelligence chair Adam Schiff announced he would be subpoenaing the acting Director of National Intelligence, Joseph Maguire. Adam Schiff revealed the acting D.N.I. did not inform Congress of an “urgent” whistle-blower complaint, which is required by law.

In the week that followed, the Washington Post reported the complaint involved President Trump making a promise to a foreign leader over the phone. Following that, the Wall Street Journal reported the foreign leader in question was Ukrainian president Volodymyr Zelensky.

As more facts were revealed lawmakers began calling for the immediate release of the transcript of President Trump’s phone call with the Ukrainian president. As well as the whistle-blower complaint.

Calls for impeachment began to increase dramatically. More and more House Democrats, Senators, and even presidential candidates began to support an inquiry and even full impeachment.

Nancy Pelosi, who had avoided impeachment since Democrats took back the House in the 2018 midterms, finally gave in.

On Tuesday, Sept. 24, 2019, after months of suppressing calls from her democratic colleagues, Speaker of the House Nancy Pelosi addressed the nation. Announcing for only the fourth time in American history that a United States president would be facing a formal impeachment inquiry.

“The actions of the Trump presidency revealed the dishonorable fact of the president’s betrayal of his oath of office, betrayal of our national security and betrayal of the integrity of our elections. Therefore, today I’m announcing the House of Representatives moving forward with an official impeachment inquiry. I’m directing our six committees to proceed with their investigations under that umbrella of an impeachment inquiry,” Nancy Pelosi said.

This is a historic announcement, in the entirety of our country’s lifespan, only three U.S. presidents have faced impeachment before. Andrew Johnson in 1868, Richard Nixon in 1974, and most recently Bill Clinton in 1998.

Both Andrew Johnson and Bill Clinton were impeached by the House of Representatives, but neither was removed from office. Both of them were acquitted by the Senate.

Richard Nixon was not impeached by the House of Representatives. Instead, he resigned before they were able to do so.

Impeachment doesn’t mean what most people think, it is not the removal of the president from office. It is only the first step in a long and complicated process to remove a president from the white house.

The impeachment inquiry announced by Speaker Pelosi is just the first turn down the road of impeaching the president. What will follow will be many hearings and investigations by several house committees to determine if the president committed impeachable offenses.

Once these investigations are complete, evidence will be sent to the House Judiciary Committee. If the evidence gathered is determined sufficient, the committee will then draft articles of impeachment. Each article will provide, in length, what the president is being accused of doing wrong.

Articles of impeachment are similar to criminal charges or an indictment as they could lead to a trial in the Senate. There is not a limit to the number of charges a president can face, Johnson faced eleven, Nixon three, and Clinton two.

The full House of Representatives will debate and vote on each of the articles. If any of them receive a simple majority the president is impeached. That does not mean the president is removed from office. It simply means the Senate now decides the fate of the president.

Once the articles are passed to the Senate they must decide whether or not to hold a trial. Senate Majority Leader Mitch McConnell may hold a vote to dismiss the articles, effectively ending the process. The constitution does not require a trial to be held, only that the Senate has the sole power to do so.

If the Majority Leader decides to go through with a trial, senators will behave as jurors and Chief Justice John Roberts Jr. will preside over the hearing. President Trump would be summoned to enter a plea; guilty or not guilty.

After hearing the arguments from Trump’s legal team and the house “manager”, the Senate will hold a vote. In order to remove the president from office two-thirds of the Senate must vote to convict. If found guilty Trump would immediately be removed from office and Vice President Mike Pence would be sworn in.

The day after the impeachment inquiry was announced, the White House released a memo instead of the transcript of the phone call. It details one of his phone calls with Zelensky, it revealed Trump asked the Ukrainian president to investigate former Vice President Joe Biden and his son. As well as to be in contact with U.S. Attorney General William Bar, and his personal attorney Rudy Giuliani to discuss the said investigation.

What makes this scandal carry more weight than the others is the fact that President Trump was withholding $400 million in aid for Ukraine that had already been approved by congress. Which some democrats don’t see as a coincidence. In other words, if there was a quid pro quo situation, the president may have abused his power.

Currently, 221 members of the House support the impeachment inquiry. 220 Democrats, one Independent. More than the simple majority needed to fully impeach.

As of right now, no Republicans in either the House or Senate support impeachment nor the inquiry. They continue to defend the president through another one of his scandals as the president continues to claim his calls involved no wrongdoing.

While it is unlikely the Republican-controlled Senate will vote to convict if it comes to that point, Democrats are hopeful that pursuing this path sets a precedent that no one is above the law, including the president.

“The president must be held accountable. No one is above the law,” Nancy Pelosi said.

This new step of investigating will truly be an uphill battle for House Democrats. Speaker Nancy Pelosi and President Donald Trump will now faceoff in one of the most important events in our country’s history. All eyes will be on Washington D.C. while this unfolds.