Students who surround themselves with positive influences are less tempted to make poor decisions. 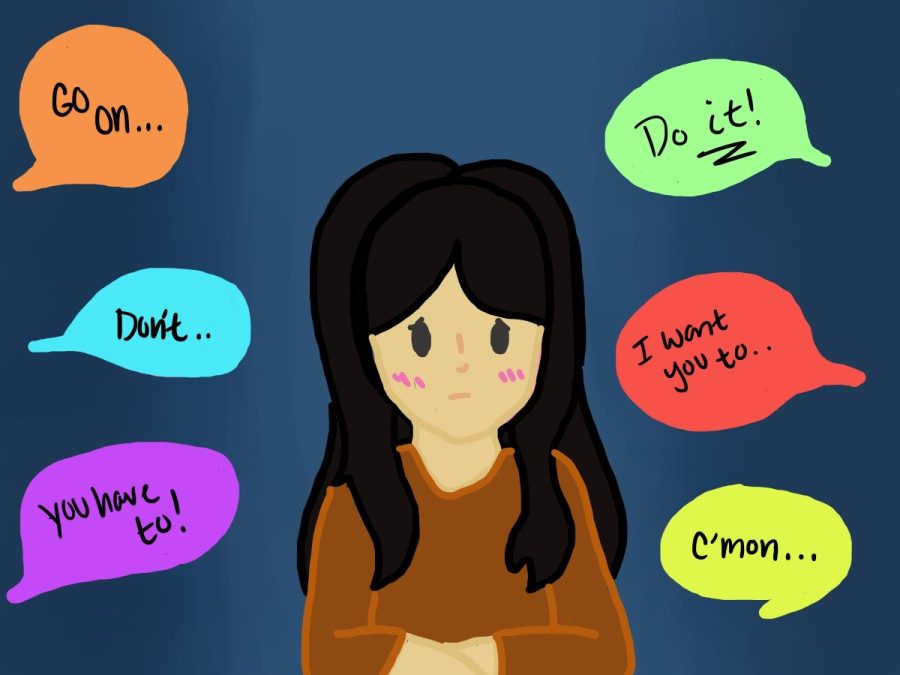 Staff Cartoonist Emily Hacker illustrated the thoughts that students commonly have when responding to peer pressure.

Teenagers often make decisions under the influence of their peers in order to make themselves look good or because they think that is the right decision.

However, not all of the decisions are right.

Students pressure each other to do things like drugs or alcohol, cheating, skipping class and lying about schoolwork. Peer pressure is seen in school by teachers, principals, counselors and other students.

“I have had students who choose friends that don’t always lift them up in a positive way. I’ve seen students grades slip due to these friends,” said Social Studies teacher Ms. Margaret Bertling.

In addition to this, peer pressure adds on to the stress already present from school, sports, and friends.

Mental health problems such as high stress levels, anxiety and depression can cause students to turn back to old habits.

Although peer pressure is often seen as something bad, there are positives including students striving to get good grades because their friends are, or pushing themselves to become better at extracurricular activities.

If students see their friends getting better grades on tests, that will encourage them to study harder so that they can get the grades they want. During a sporting event, children may find themselves not achieving the goals they set for themselves while their friends are.

If they care enough to exceed, this will push them to reach their full potential leading to success.

“I think students need to be prepared with reasons that can get them out of things. For example, if a student is being pressured to do something bad, they can say they’re worried about getting in trouble with their parents or that they have something important coming up and they can’t participate,” said math teacher Mr. Ben Crawford.

Teenagers don’t realize how their actions at the moment can affect them in the short term and the long term.

Students can face a wide range of consequences such as failing a class from continuous cheating; safe resulting from skipping a class or bullying; being removed from a sports teams or other activities resulting from poor grades or failing a drug test.

Long term consequences can include: being removed from a school and sent to an alternative school resulting from fighting or drug use; pregnancy or sexually transmitted diseases resulting from sexual activity; addiction and jail time resulting from the abuse of drugs and alcohol.

On Aug. 7, 2018, Jordan Holgerson, 16,  faced the consequences of negative peer pressure. She was pushed off a 60-foot bridge over the Lewis River near Vancouver by her friend Taylor Smith, 18.

She suffered several injuries including six broken ribs, a punctured lung, and air bubbles in her chest from the fall. Smith claimed that she was helping Holgerson get over her fear and had no intent to hurt her.

Holgerson will face the long term healing from her injuries while Smith will face the repercussions from causing the incident. This event could have been prevented if Holgerson had not wanted to jump off the bridge just because she had seen her friend do it before. Her choice to not do it could have prevented Smith’s temptation to push her friend off the bridge in the first place.

Even though, some students still fall for peer pressure because they do not believe that there will be a result, or that they will get caught.

“When choosing friends, students need to be careful about their choices. Ask yourself ‘Do I feel good about the conversations I have with this friend? Are they helping me be a better person and achieve my goals?’ If not, consider putting some distance between yourself and that peer,” Ms. Bertling said.

The term “be a leader, not a follower” is relevant in these situations and students should be continuously reminded of that.

Surrounding yourself with positive influences allows you to avoid the temptation of poor decision making and provide a positive example for other students. Being a leader can be easy, students can get involved in clubs, activities and sports that will give them the opportunity to be a leader.

Sometimes being your own person is the best option and it will keep you out of following the crowd and possibly getting into trouble.