Video Games and the Teenage Brain

Recreational technology is affecting the development of the adolescent mind. 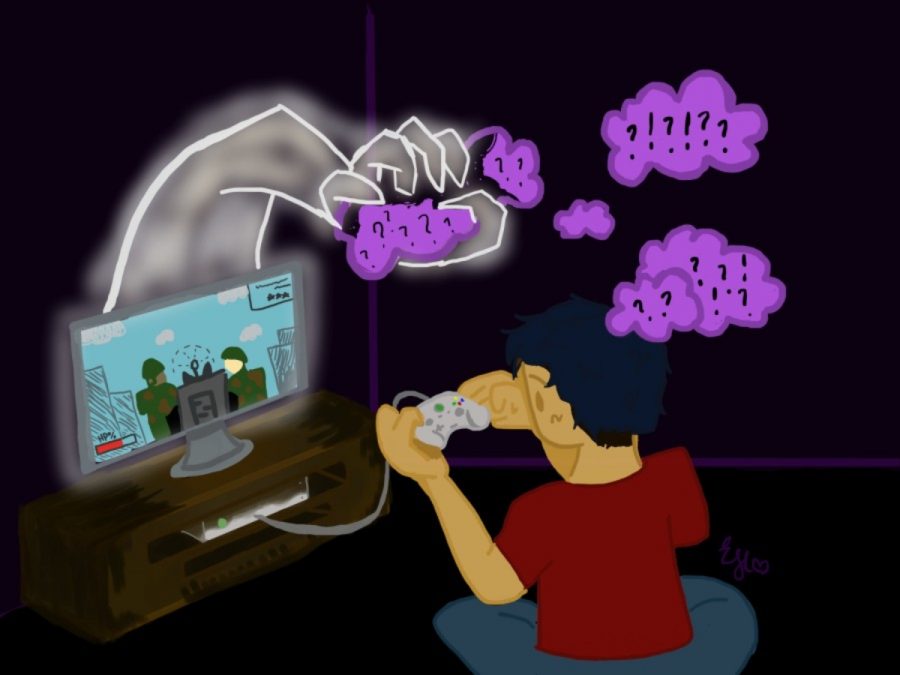 Staff artist Emily Hacker illustrated this "Spirit" of video games grabbing at the thoughts of a teen.

It’s fair to say that video games have become an increasingly attractive way to spend time for most teenagers. But is playing video games really bad?

Video games are sometimes prioritized over school work and playing them is a common excuse for procrastination. This can be academically harmful, and teachers have noticed.

“If there is a minute transition between two things, some children are automatically on their phone trying to play whatever game it is that they’re into at the moment. It’s an ongoing battle and it does cause some children to miss instruction, content, and directions,” English teacher Ms. Sidney Durham said.

“I play video games 45 minutes a day. Some video games require strategic abilities to coordinate attacks with your teammates while other games strategize ways to improve. I find myself putting videos games ahead of school work because I am heavily addicted to video games,” freshman John Sader said.

Video games could also be affecting adolescents behaviors and way of thinking due to the violence like Call of Duty: Modern Warfare and Dragon Age. Both games, like many others, involve violent and mature content. Despite the fact that video games come with age ratings, most teenagers don’t follow the recommended age.

“Violent video games could make someone express aggressive behavior but it really depends on the person and how young you are,” junior Yousuf Al-Azzawi said.

“One example is in a 2012 study done by Dartmouth professors Jay Hull and James Sargent. It has proven that playing risk-glorifying video games yields increased real-life risk-taking behaviors such as drinking and driving and delinquency, thus exhibiting conscious brains are not immune from the impacts of altered states.”

Another problem with spending a large amount of time on video games is the potential for health problems such as poor physical activity, lack of sleep and unhealthy eating habits. It’s difficult, though, because playing video games makes you feel good. Dopamine is a hormone that makes a person feel good about themselves for what they are doing at the moment. Large amounts of dopamine are released into the brain while playing video games because they are very reward-motivated.

Although video games are seen as a negative way to waste energy some believe that they are in fact good for the teenage brain. They can be considered stress relievers and a form of entertainment for some teenagers.

“Playing video games is a stress reliever and a form of entertainment like watching a movie or reading a book. Some people enjoy it more than others,” sophomore Tristan Dorton said.

With video games such as Minecraft, it allows teenagers to expand their life and work skills. According to IDtech, the game it promotes creativity, problem- solving and collaboration. With Minecraft not having a way to “win” in the game, it opens the door for possibilities of what players can build or do.

“Video games open a whole new route to their creativity and imagination in many different ways that aren’t often expressed. Although kids can get aggressive playing video games, I don’t believe video games cause them to be aggressive,” freshman Caden Carter said.