Logan Moore has curated the best films to view on Halloween night. 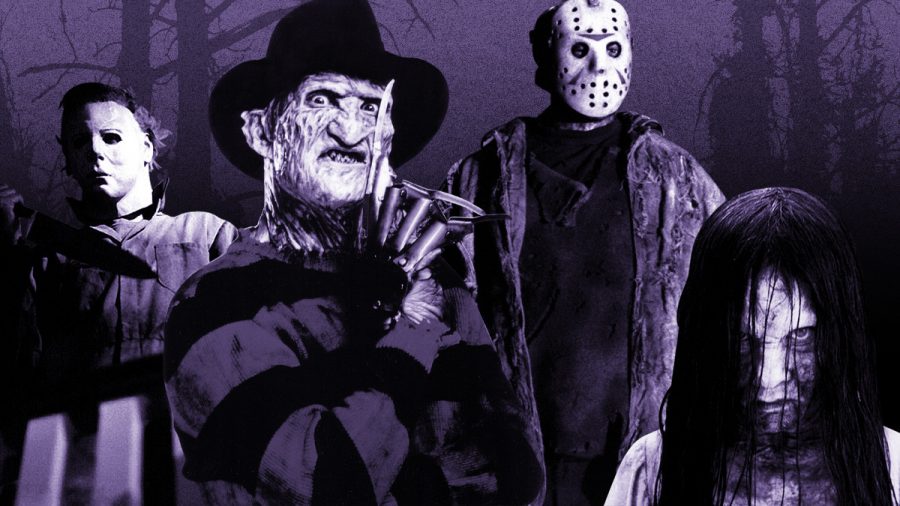 Watch out for these horror icons that appear in these movies recommended for your month where things go bump in the night.

When it comes to the typical thriller movies unfortunately there are no zombies dancing with their hands in the air. Thriller movies will be sure to have your heart pounding with “edge of your seat” suspense.

For the most part, a lot of these movies are good all-around with hits like Get Out , Final Destination, and The Thing (1982). But the one that stands above all else is Stanley Kubrick’s The Shining.

It’s carefully crafted music and amazing acting from Jack Nicholson and Shelly Duvall. The two make this Stephen King book to movie adaptation easily the best as an intense psychological thriller that’ll keep your muscles the tensest they’ve ever been.

Slashers are a pinnacle in horrors that make you say “I don’t think someone has that much blood in their body.” Known for being incredibly gruesome and an absolute gorefest, many iconic horror movies have come from this genre. The Friday the 13th franchise, My Bloody Valentine, and the Halloween franchise.

However, the best movie that quite literally started the genre is Tobe Hooper’s Texas Chainsaw Massacre.

A story of young adults getting lost in Texas and being chased by a chainsaw-wielding maniac who wears other people’s faces. This movie was considered one of the most influential of its time and of course was extremely controversial, but what’s a horror movie without controversy?

Supernatural is definitely a genre that constantly hits and misses with its movies. Amazing films include Carrie, The Ring and The Evil Dead 1 and 2. After all that, you could also get something disappointing and bland like The Bye-Bye Man.

So, if you want the best of the best, watch William Friedkin’s The Exorcist. This movie is iconic for not only having a horrifying story of a girl possessed by a demon, but it was the first horror movie to be nominated for an award… it didn’t win but it was a first for horror and showed how powerful horror movies can be in film.

Let’s say you are not into demons, blood, and possible heart attacks, but want to watch someone get murdered while still getting a laugh. Well, the best comedy horror is movies that play on tropes of horror movies such as a Cabin In The Woods and Scream.

But if you’re really looking for that movie that flips the script, it would be Eli Craig’sTucker and Dale vs Evil.:a movie where a bunch of college kids go camping in the woods when two brothers who just want to fish in peace are murderers, try to kill the redneck brother and accidentally kill themselves only thinking the brothers did it. This movie is over the top levels of ridiculousness, and with comedy almost always happening, this movie is truly the greatest of the gut-busting and gut slashing genre.

This is my list of the best horror movies. Even though certain movies got a spotlight, that’s not to say that the other movies mentioned aren’t good (the exception being Bye-Bye Man). They all truly deserve a viewing at least once.

Even when it’s not Halloween, you should watch horror movies with how bloody, suspenseful and cheesy they all are. There isn’t much to not love about it. So don’t get possessed, turn insane or have a chainsaw cannibal/college kids chasing after you, and have a Happy Halloween.