My Dear Melancholy Lives Up to its Name

The Weeknd was able to tell an emotional story through only six songs. 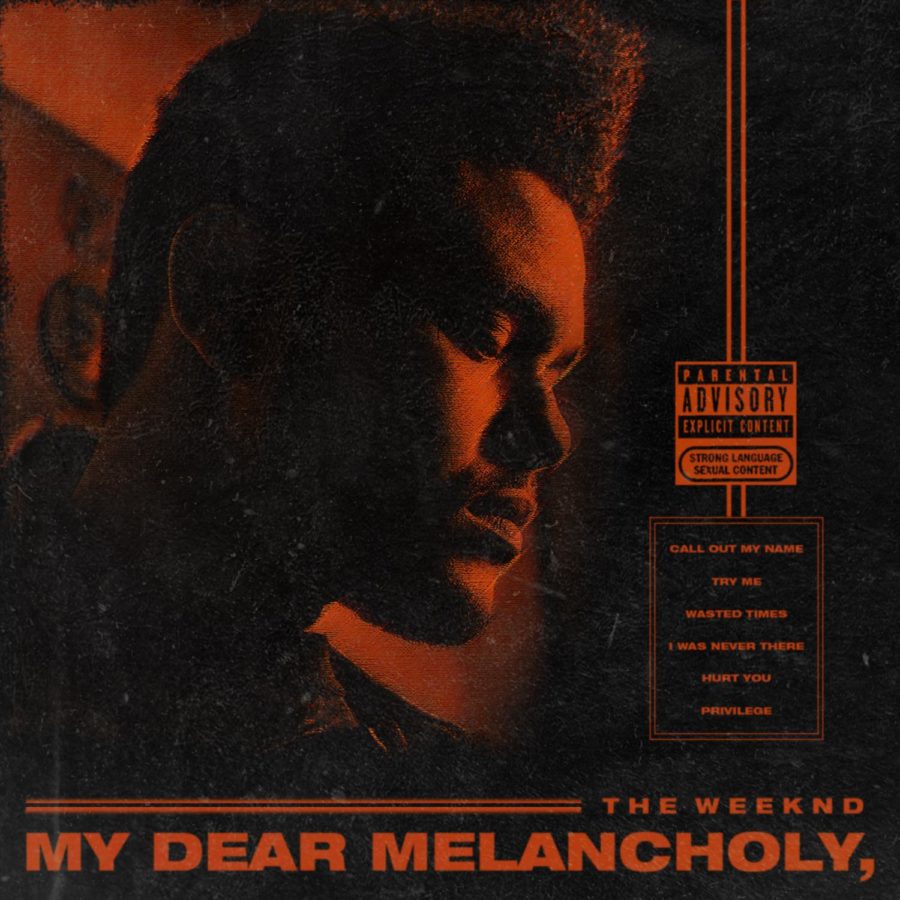 The Weeknd is known for slow rhythms and sensual ballads. This album provides more of the usual, yet still remains relevant and non-repetitive. Over the course of six songs, The Weeknd explores his innermost feelings about love and the sorrow that accompanies it, in his surprise album, “My Dear Melancholy.”
“Call Out My Name”
In the first song on the album, The Weeknd heartbreakingly requests for his significant other to stay with him, despite her disinterest. The chorus, backed with a more intense beat to emphasize his desperation for companionship, grows increasingly aggressive as the song continues. The message maintains throughout the song, with unforgiving lines such as, “When times were rough, I made sure I held you close to me” and “I almost cut a piece of myself for your life”

“Try Me”
Next up, The Weeknd begins a track with an upbeat tempo backed by samples of himself singing. Centered around the theme of desire, he urges a girl to consider going out with him. The beat creates a particularly rhythmic slow dance. It is littered with The Weeknd’s pleas for “trying him”, noting that “Once you put your pride aside, you can notify me.”
“Wasted Times”
On the third song of the album, The Weeknd speaks of a woman and their “wasted times.” Although she treated him badly, he still wonders about her whereabouts, asking himself questions about her love life. An ominously upbeat track, backed by low sounds and an intense bass, further pushes the point of his constant worry regarding the woman.
“I Was Never There”
“What makes a grown man want to cry?” begins the fourth song on the album, “I Was Never There.” The Weeknd speaks of his sadness backed with sorrowful beats, pushing the tempo of longing. He serenades the listener, insisting that nothing matters and questioning his self-worth. Toward the middle, though, the beat changes and he speaks of being with a woman again and using her to feel something, but ultimately still feeling nothing. As the lyrics note, “His happiness is not for real.”
“Hurt You”
On his fifth track, The Weeknd connects with the listener on an even more personal level. He speaks of not wanting to hurt an emotionally fragile woman who is caught in a bad relationship. Yet again, the sensual beat backed with emotional and impactful lyrics show the emphasis on how much the woman is really worth to him. His powerful lyricism proves this time and again as he describes “All the nights you’ve spent alone drying your eyes and all the nights you’ve thought about taking your life.”
“Privilege”
To wrap up the album, The Weeknd says goodbye to a girl. The most powerful song on the album, it shows the pain that he went through during this breakup, despite his desire for an understanding between the two. He craves freedom from the pain, speaking of the things he will do to get there. The song is very light, at the end losing all background noise, save a piano. In his words, “We’ve said our last goodbyes, so let’s try to end this with a smile.”

The album truly lived up to its name: melancholy. Yet, it was beautiful and unique, each track taking a meaning and life of its own with a focus on momentary release and heartbreak. It is an album to listen to through and through regardless of the listener’s mood, for The Weeknd’s calming voice and mellow beats are, as always, an exciting endeavor.