The latest installment of the Star Wars saga impressed its critics and audience. 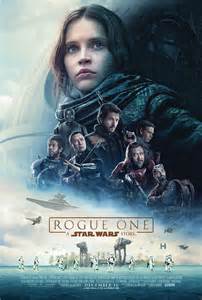 When it was first announced that Disney would be expanding upon the main storyline of the “Star Wars” franchise, it was met with skepticism from fans. Many had doubts that stand-alone films would diminish the “Star Wars” name. “Rogue One: A Star Wars Story” turned out to be a successful film, earning an 85 percent in ratings on Rotten Tomatoes.

“Rogue One” is a movie that can keep fans captivated even when seen multiple times. It’s stunning visual effects, enticing plot and characters and moving score made it enjoyable to watch. However, there were certain aspects of the movie that didn’t work well.

The beginning of the movie moved at too quick of a pace. With the many short scenes and quick transitions from planet to planet, it took some effort to keep up with what was happening. But, when the main character, Jin Erso, is taken in by the Rebel Alliance the plot began to slow to a more comfortable pace.

One disappointment about the film was Jin’s character. The trailers hinted toward a strong, well-developed female lead but the character fans expected to see was apparently lost after multiple reshoots. The trailers had Jin saying lines that gave her an edgy, independent character. In the movie, these lines were taken out and the character was left with a shell of a personality. However, it was a better attempt by Disney to bring another strong female lead to the “Star Wars” universe.

American composer Michael Giacchino wrote a captivating score that moved the film along beautifully. Giacchino perfectly captured what makes “Star Wars” scores so infamous by using odes to the old sounds and creating a score that truly deserves its place alongside John Williams’s classics.

The ending was masterfully done. “Rogue One” did a great job in getting viewers attached to the characters and then taking them away. The film was resolved with a heartfelt ending and strengthened the relationships between the remaining characters.

The film’s success and entrancing story touched students at Dunbar.

“Being that I’ve never seen a single Star Wars movie before, I was a bit confused when watching rogue one,” said senior Rest Aliu. “Nevertheless, I thought it was a phenomenal movie and truly admire the editing it displayed.”

For those looking for an introduction to the “Star Wars” series, “Rogue One” is a great film to start with.