What will happen in the next season of Game of Thrones? Staff reporters Matt Jones and Abby Hendren give you their predictions on the upcoming season 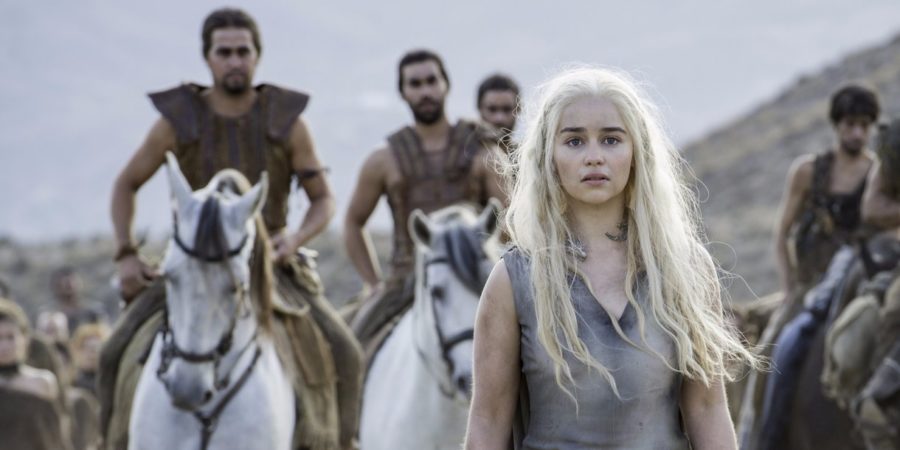 Another explosive season of Game of Thrones has come and gone. The last episode alone left behind tremendous repercussions.

Beware, there are spoilers ahead.

Let’s take a look at what happened in the last two episodes. Ramsay Bolton and his army were defeated in the Battle of the Bastards. Once Jon took his turn on him, he handed Ramsay over to his younger “half-sister” so she could get her revenge on her evil husband and finish him herself, effectively ending the Bolton lineage.

Episode 10 started off with the deaths of the High Sparrow, Margaery, Mace and Loras Tyrell and Lancel and Kevan Lannister among many others in the Sept due to a massive wildfire Cersei set as a trap.

Traumatized upon witnessing the explosion, King Tommen threw himself off of his balcony. Cersei also had Grand Maester Pycelle killed by Qyburn (along with her “little birds”) leaving him the only member of the small council left. With no remaining opposition, Cersei is crowned the Queen of Westeros.

In the north, Jon Snow became the new Robb Stark, having been dubbed King in the North after he and Sansa retook Winterfell. Apparently, the Northmen didn’t learn their lesson with Robb. Before leaving the wall, Jon Snow and Ser Davos Seaworth, hand to the late King Stannis Baratheon, ordered the Red Priestess Melisandre to ride south and never be seen near them again.

Further north, Bran had a vision of what happened in the Tower of Joy. He saw his father, Ned Stark, as a young man bedside with his sister Lyanna, who had just given birth. It became clear that Jon Snow is in fact the bastard son of Rhaegar Targaryen and Lyanna Stark.

Knowing that Robert Baratheon would kill the baby if he found out it had Targaryen blood, Ned fabricated a story about how the baby is his bastard son conceived out of wedlock. In doing so, he sacrificed his honor for Jon’s safety and fulfilled his dying sister’s last wish.

Samwell Tarly, Gilly and baby Sam arrived at the Citadel in Old Town, where Sam will be training to become the new Maester for Castle Black.

At the Twins, Walder Frey and his sons are murdered by Arya Stark who was avenging the deaths of her family at the Red Wedding.

Finally, Daenerys began to cross the Narrow Sea alongside the Dornish, Yara and Theon Greyjoy’s Ironborn fleet, the Second Sons, the Unsullied, the Dothraki and her three dragons. This is what we have been waiting for since the first episode of season one.

So, what’s gonna happen next?

With Daenerys on her way to Westeros, Cersei’s time on the throne will be short lived. King’s Landing stands no chance against Dany’s armies. Cersei, with her back against the wall, will take the same route as the Mad King and try to burn all the wildfire under King’s Landing. Her twin brother and lover Jaime Lannister will have to kill her, just as he killed the Mad King, to protect the city once again. This would set the stage for a new ruler to come about, such as Jon or Daenerys.

It is safe to assume this will happen as it is the last prediction made by the witch Cersei encountered as a child that has yet to come true. The witch predicted that Cersei would be killed by her younger brother, which could be Tyrion, but it may be hard seeing as he would be busy being Hand of the rightful Queen.

Jaime will still love her, but as all of their children are dead, Cersei has no redeeming qualities. Dany will want to execute Jaime for killing her father years ago, but Tyrion will convince her to let him live and save Jaime as he has saved Tyrion’s life numerous times. As a result he would become the captain of the Kingsguard.

“I think that Daenerys is going to kill Cersei because she’s going to want to take over the Kingdom, and will try to kill Jaime,” said Dunbar senior Gbutue Vorkpor. “But Tyrion will change her mind, and then she and Jaime will get married.”

Daenerys will most likely make a stop in Dorne before heading to King’s Landing where there could be some tensions between Tyrion and the sand snakes, as they blame him for the death of Oberyn Martell. In return, he could blame them for the death of his niece, Myrcella and it’s hard to forget the fact that he was blamed for the death of the late King Joffrey Baratheon when it was in fact Lady Olenna Tyrell with the help of Littlefinger.

In the north, Bran and Meera will eventually make their way back to Winterfell and show Jon Snow his Targaryen lineage. He’ll realize that he’ll need to ally with Dany to fight back against the White Walkers, and that’s where the season will end.

We personally believe that Jon and Daenerys will solidify their alliance and their claims to the throne through marriage. Half-nephews can legally marry their aunts in Westeros, and clearly the Targaryens have had no problem with incest in the past.

Dany will have some sort of conflict regarding her dragons as they’re the only things she truly loves. One of them may come to pass away or she may encounter a white walker dragon.

Speaking of White Walkers, the wall is definitely coming down this season. The wall is protected with ancient magic that can be broken by the Night King, which Bran has on his arm. Conveniently, Bran is attempting to make his way past the wall back home to Winterfell.

We can expect more Targaryen flashbacks from Bran this season as well. He’s probably the only character on the show that’s truly safe since he is most essential to unraveling the plot at this point.

Similar to Harry Potter, many will die for the Starks’ cause. Brienne of Tarth, possibly one of the most honorable people in the series, swore an oath to the late Catelyn Stark to protect her daughters until her own death.

Brienne is particularly adamant in her oaths. Her unwavering loyalty is shown through her continued allegiance to the late Renly Baratheon after serving in his King’s Guard and her Valyrian Steel Sword named “Oathkeeper.”

We can expect Theon Greyjoy to take some heat for the Starks, as he owes them a whole lot after he betrayed Robb Stark in the War of Four Kings and raided Winterfell. We’ve seen some foreshadowing of these actions when he helped Sansa escape from the Boltons, despite his knowledge of how intense the repercussions would be.

We believe Sam is going to discover something significant about how to effectively kill the White Walkers during his time studying at the Citadel. However, he may also choose to come to the aide of Ser Jorah Mormont who was sent on a quest by his one true love Daenerys to find the cure for his Greyscale and return to her.

By this point we have determined that Lord Petyr Baelish is the ultimate conspirator in the Game of Thrones, so we can most definitely expect some elaborate plans coming from him. This can be worrying as he’s already planted seeds of doubt in Sansa regarding Jon’s rule of Winterfell and the North. Sansa hasn’t exactly been power-hungry throughout the series but she’s also gained a new burst of confidence following the Battle of the Bastards and the death of Ramsay Bolton. If we’re lucky, she’ll outplay Littlefinger and his schemes.

Unfortunately for the Red Priestess Melisandre, she and newly-made cold-blooded killer Arya Stark are last seen wandering around in the same general vicinity, and Melisandre is on her list.

However, many of Mel’s prophecies have come true and she could be of some use in the upcoming war, so Arya might spare her. We can only hope that Arya will encounter her direwolf, Nymeria, on her journey back to Winterfell. At this point there’s only one direwolf that we know is alive for sure, and what’s a Stark family reunion with no direwolves? Or, if we’re unlucky, a girl has no wolf.

From there, it’s hard to tell what will happen. We’ll see how much I got right when the show returns for Season 7.